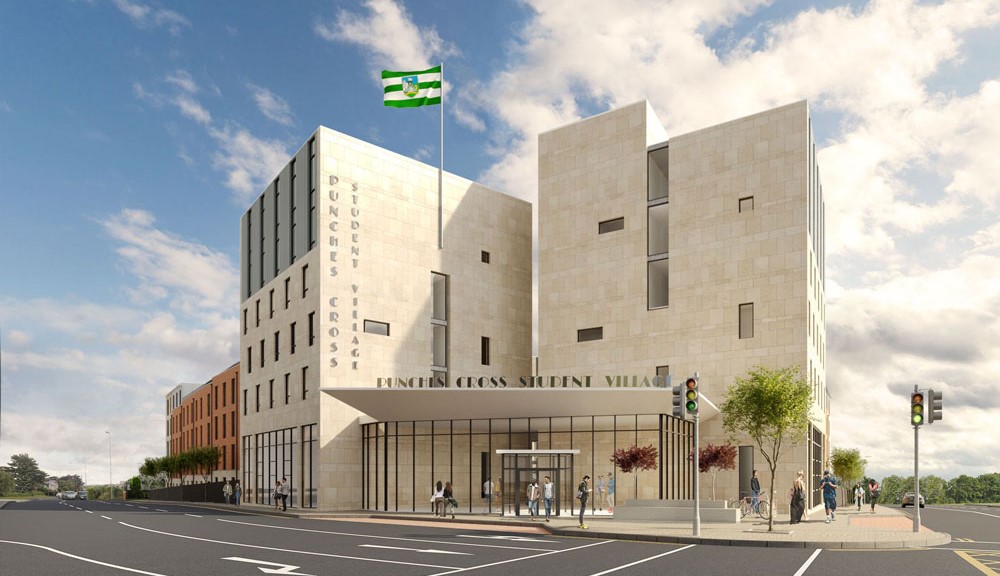 New Limerick Student Village – Pictured above is a rendering of the student village, which will be located opposite Punch’s Cross

An Bord Pleanala has given permission for a new student village which will accommodate over 300 students at the former John Moloney garage site.

An Bord Pleanala has given permission for a new Limerick student village at the former John Moloney garage site.

Cloncaragh Investment had sought permission to build 100 apartments accommodating over 300 students at the long-derelict site. The site, situated opposite Punch’s Cross has lain idle for almost two decades.

The new facility is designed to provide accommodation for those studying at Mary Immaculate College (MIC), the University of Limerick (UL) and the Limerick Institute of Technology (LIT), with UL and LIT having ambitious growth plans.

The accommodation will be fully supervised and managed with security and concierge services for its residents.

The main building will range from four to six storeys in height, including communal facilities such as dining rooms and social activity rooms. It will contain 54 student apartments containing three to six-bed spaces each.

Derick Walshe of Cloncaragh Investments said, “This is a positive day for Limerick city that will now mean that an idle and vacant brownfield site will be regenerated into a positive for our city.”

This is the second time permission was sought for the project, with An Bord Pleanala rejecting the first blueprint two years ago, leading to a review from Cloncaragh, and a fresh application which has paved the way for this decision.

“This development will see 100 quality apartments delivered, which will accommodate over 300 residents.  By adding this housing stock, it will help to ease the housing pressure in the vicinity; by increasing housing supply and helping to make rents and housing more affordable,” Mr. Walsh added.

He said the MIC, which is located nearest to the development, is supportive of the project.

“The University of Limerick also plans to develop a campus on Sarsfield Street and this will also feed into the demand for this accommodation type,” he added.

Alongside the apartments, almost 400 bike storage stands will be delivered, and the local road infrastructure will be improved.

This will include widened footpath, a proposed road widening on the Rosbrien Road to allow for an extra traffic lane; and a new centerpiece plaza at Punches Cross.

Local Labour Councillor Joe Leddin, who welcomed the project, said he had asked the developer to facilitate an online meeting to allow local residents to engage with the plan.

“Assurances were provided based on residents’ concerns that the proposed two retail units would not compete or displace business from the local Greenpark local centre while a detailed student management plan to include centre manager would be provided,” he confirmed.

Mr. Walshe said, “Today’s decision will see the site turned into something that contributes economic positives for Limerick City as well as meeting the rising demand for quality accommodation.

Limerick is currently undergoing significant regeneration and it is important that critical infrastructure such as housing keeps up with demand, so that our city can continue to flourish.  It is our intention to begin construction as soon as possible and this, in turn, will also stimulate local employment in Limerick’s construction sector.”