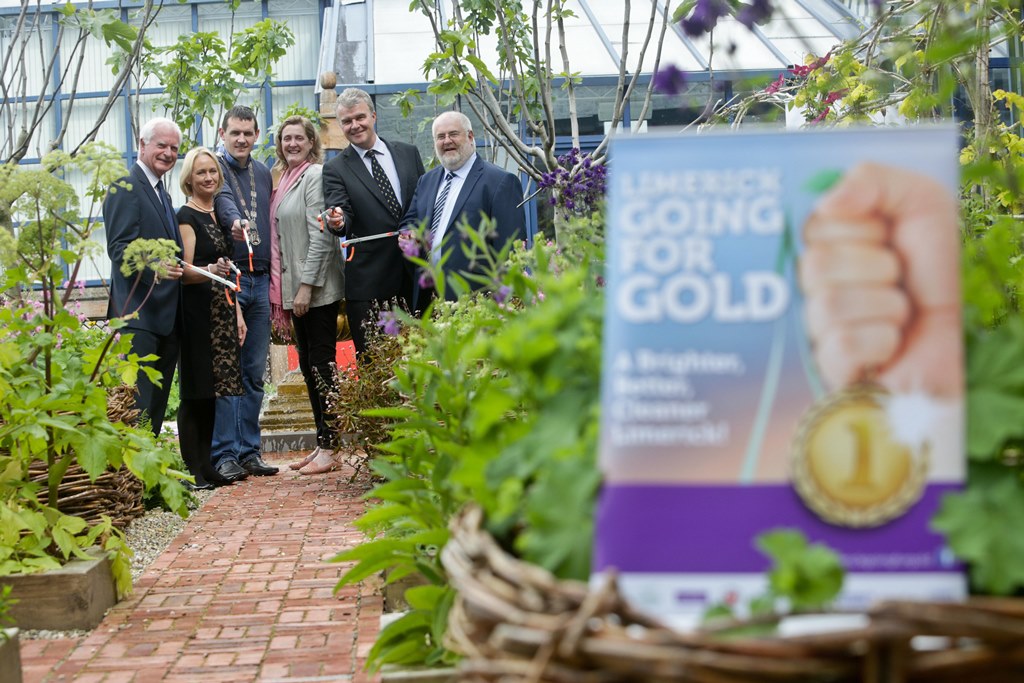 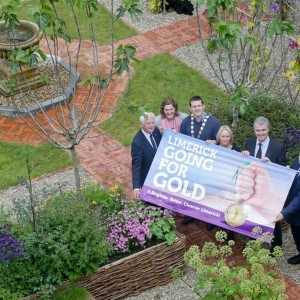 On Tuesday May 26, Merchants Quay in Limerick hosted the launch of the Going For Gold campaign which this year has been expanded to incorporate all of Limerick city and county, as well as the Limerick In Bloom competition and a new improvement grant scheme.

Featuring a prize fund of €74,000, which is fully funded by the McManus Charitable Foundation, this year’s competition features four separate categories, namely Going for Gold Challenge (top prize of €10,000), Limerick In Bloom and a Tidy Towns Incentive category. Separately, there is a Best Front Garden Competition, sponsored by The Parkway Shopping Centre.

Going For Gold also encompasses a new grant scheme which is 50% match funded by the McManus Charitable Foundation, applicants to which will be automatically entered into the Going For Gold Competition. The Limerick Going for Gold Environment Improvement Grant Scheme replaces the Priming Grant and Environment Improvement Grant schemes which were previously administered in Limerick City and County.

Speaking at today’s launch event, Deputy Mayor of Limerick, Cllr. Frankie Daly welcomed the “important role” Limerick Going For Gold played in enhancing the appearance of the local environment in Limerick in the weeks leading up to the Tidy Towns judging during June.

“I am delighted to announce the 2015 Limerick Going for Gold Environment Improvement Grant & Competition incorporating Limerick in Bloom. I would encourage as many groups as possible to participate. I wish to acknowledge the JP McManus Charitable Fund for its generous sponsorship of the scheme, as well as the support of the media partners, including Live 95FM, The Limerick Leader, The Limerick Post and I Love Limerick,” said Cllr. Daly.

Gerry Boland of the JP McManus Charitable Foundation commented: “The Foundation welcomes the expansion of this competition which provides local communities throughout Limerick City and it environs as well as Limerick County with an incentive to get together, improve their own areas and enjoy and reap the benefits that participation can bring. This new and improved scheme is likely to generate even greater interest amongst community groups and business who are considering participating this year.”

This category is open to all groups including those that have entered Tidy Towns and will have population subcategories. The following will be considered in relation to the judging of this category: 1) Project for which ‘Limerick G4G EIG incorporating LIB 2015’ grant aid was provided; 2) Application form received; 3) General absence of litter from the areas including approach roads; 4) Features of approach roads to area, village or town; 5) Trees; and 6) Details of additional works undertaken since previous year if applicable.

This category, which is open to all groups, relates to appropriate planting and floral displays, use of colour, perennial planting and planting schemes that attract biodiversity. Hanging baskets and window boxes are relevant in this section. There will be a monetary prize for winners in each of the four Municipal District areas with an overall winner receiving a monetary prize and the Limerick in Bloom Trophy.

This category requires completion of an additional application form. The Parkway Shopping Centre, Childers Road, Limerick, produce the application form along with sponsoring and judging this category of the competition. If you would like to enter a garden in your area for this competition please tick the relevant box in the Application Form or email [email protected]. Please note the garden must be visible from the public road.

For further details contact the Limerick City & County Council Customers Services team on 061 496200 or by email to [email protected].