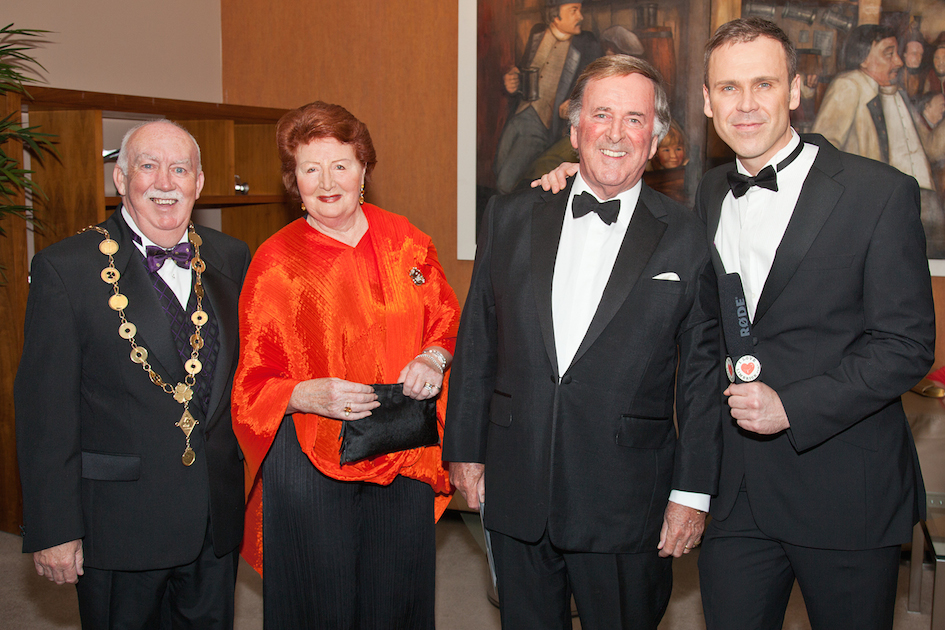 Pictured: Richard with Mayor Jim Long and Sir Terry Wogan and his wife Helen at the Mayors Ball. Photo by Dolf Patjin.

In memory of the late legendary broadcaster Terry Wogan, University Limerick have launched a new Terry Wogan Sports Scholarship. The news was announced at the University President’s Gala Dinner on Friday night along with a number of other sports scholarships.

The annual President’s Gala Dinner was a huge success and was attended by over 300 sports stars and personalities, including former New Zealand All Blacks rugby international, Doug Howlett; Munster Captain, CJ Stander and his international swimmer wife, Jean Marie Stander; Kilkenny hurler, Eddie Keher; as well as a number of University Limerick’s past and present Olympians. Irish World Academy artist Martin Hayes along with master guitarist Denis Cahill provided music on the night. The UL Foundation organised the annual dinner and are also supporting the scholarship scheme.

University Limerick formally launched a number of sports scholarships at the Gala Dinner , “designed to support elite athletes in pursuing and excelling in their sport while also undertaking study” at the university. The three levels of awards are gold, silver and bronze with a value of up to €10,000 at the top level award. The scholarship holders will benefit from support in areas such as accommodation, registration fees, sports science, coaching and mentoring.

UL president Professor Don Barry said the scholarship is in honour of the late Limerick native Sir Terry Wogan, who received an Honorary Doctorate from UL in 2004. Wogan passed away in Buckinghamshire in early January, at the age of 77 surrounded by his loved ones. Terry was a greatly loved Limerick figure, and had a keen interest in sport and education, who enjoyed an amazing 50 year career on radio and television. The Terry Wogan Sports Scholarship will be a much-coveted accolade by the sports stars of the future.