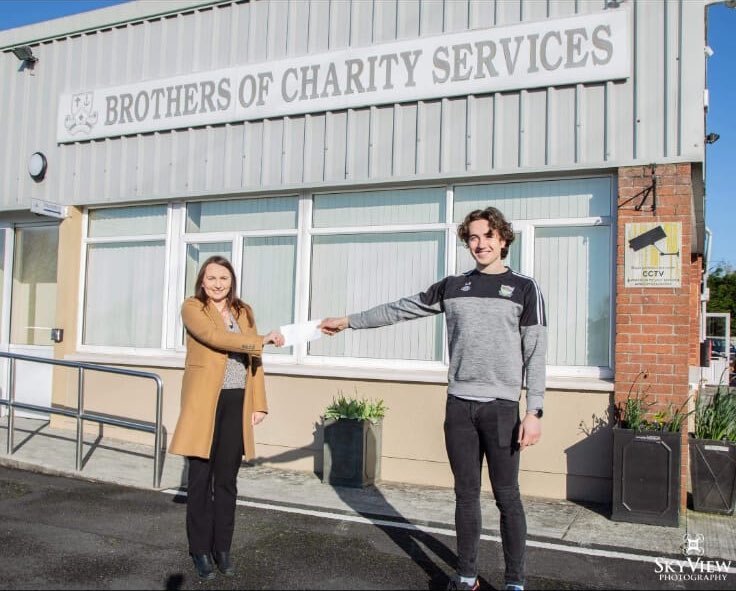 Cian Sheahan pictured above with butcher and sponsor Seamus Cussen

Newcastle West GAA held a fundraiser where everyone ran a 1km sprint and donated money. They raised €400 from the fundraiser and chose to donate to NCW Brothers of Charity. Cian Sheahan, a Limerick senior football player, won with a time of 2 mins 50 seconds, a time up there with the fittest GAA intercounty players in Ireland!

Brian Hurley, a footballer and hurler with the club said, “As we can’t meet up for training or running, we decided it would be a bit of craic to see where everyone is at individually. We didn’t want to do something that would take ages to complete as that would give people an excuse not to test themselves!”

The club approached Joe Lee from Lee’s bar in the square NCW, Seamus Cussen butchers in NCW and Laura Greaney from ABC nutrition who kindly sponsored great prizes that drew the attention of all the team and gave them a great incentive to win.

They mapped out one 1km route that everyone had to do in their own time so that there were no extra hills for help. Everyone did the sprint individually and then sent their times through messaging. The winner was the person who did the sprint in the quickest time.

The fundraiser took place on the first week of March and a week was given to participants from Sunday to Sunday to get their time in to be involved. Players from the senior football and Premier intermediate team took part.

All proceeds went to the Brothers of Charity Limerick, who are committed to working with people with intellectual disabilities and their families to live the lives they choose. By forming a relationship with each individual who uses the services and their family, they aim to identify the supports each individual requires to participate as valued citizens in their community.

We did a fundraiser where everyone ran a 1km sprint and donated. We raised €400 and chose to donate to NCW Brothers of Charity. Congrats to Cian Sheahan who won the competition with a 1km time of 2 mins 50 seconds! Thanks to the sponsors @CussenSeamus, @Abc_Nutrition & @jlstan92 pic.twitter.com/FLjmWRvwiz

The Brothers of Charity first came to Ireland in 1883. In the early 1970s, they established an assessment and advisory service in Limerick City at the invitation of the then Midwestern Health Board and the services were greatly expanded in the following years.

Today, the Brothers of Charity Services, Limerick supports 358 adults with intellectual disabilities and over 400 children and their families attend our children’s services in West Limerick.

Brian said, “We chose brothers of charity because they are one of the many brilliant local charities in the town and we see every day the great service they provide and we wanted to show our appreciation to them. Any fundraising they get especially in these times is important.”

As a club, Newcastle West GAA are committed to helping the many different charities in the town and have been doing different donations for many years now. They are determined to continue to contribute to the local area. Brian said, “We thought as senior players we should lead from the front and get 2021 off to a good start off the pitch.”