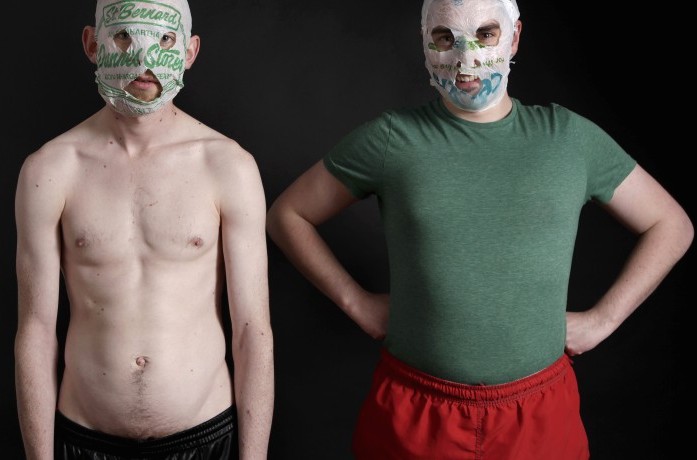 Nine Things You Never Knew About The Rubberbandits

Nine Things You Never Knew About The Rubberbandits. Swear t’God

If you’re from Limerick City and you’re not familiar with this modern classic duo who put our city on the map, then there’s only one thing for you to do. Find a Google Machine (they can be found inside of a computer if you kick it hard enough while saying Open Sesame’) as quick as possible and then get back to me when you know some things. I can’t help you otherwise.

Now they’ve been around for a good couple of years at this stage, so I figure it’s about time we dropped some truth bombs about The Bandits. Not the facts we all know from the mainstream media. Nor the usual claims everyone makes about once buying Blind Boy a shiny new plastic bag with a six-pack of cider in it, or letting Mr Chrome sign their chest with a Sharpie after a gig. I’m here to let you know some of the as-of-now untold stories behind two of our favourite comedic exports. All completely true. Probably (shakes head). Who knows? My sources are dodgy to say the least.

1. Blind Boy once accidentally stood on a ladybird but brought it back to life by singing Stevie Wonder’s “Isn’t She Lovely’ into its ear.

2. That same ladybird went on to become an international DJ in Ibiza by jumping on the shuffle button on Armand Van Helden’s old iPod.

3. Mr. Chrome is able to tell the difference between a cup of Barry’s tea and Lyon’s tea simply by playing the National Anthem next to the mugs and watching the vibrations in the water.

4. The sneakers (ie. tackies) worn by The Rubberbandits are actually made entirely of donated strips of skin sent in by fans through a special Kickstarter website.

5. Before every show, each Bandit is given a ferret to hug for an awkwardly long length of time. This is their form of meditation to cure stage-fright.

6. During their down-time in between gigs, Blind Boy teaches hurling to Japanese schoolchildren in the hopes of being the first team to take home the gold when the Long Puck becomes an Olympic sport.

7. There’s a secret track on the Horse Outside single where the rhythm section is entirely made up of Mr. Chrome slapping his own belly and singing only when he breathes in.

8. On their down time, The Rubberbandits like to relax by raising silkworms. Their aim is to have a line of their own 100% raw silk designer bags / masks to eventually replace their trademark plastic ones and become a major fashion label by 2016. The name of their product? “Gowl Bags.”

9. Hollywood producers have been in talks with the Limerick duo about making a movie of their humble beginnings and subsequent meteoric rise to world stardom. Helen Mirren is pencilled in to play Mr. Chrome, and according to film industry insiders, the role of Blind Boy Boatclub has already been assigned  – to Dame Judi Dench.

I can smell the Oscars already. I’ve recently heard rumours of Helen Mirren acting the maggot outside Donkey Ford’s chipper wearing nothing but a pair of Adidas tracksuit bottoms and an old Tesco grocery bag on her head. Some woman.

ALL HAIL THE RUBBERBANDITS, UNDISPUTED KINGS OF LIMERICK!