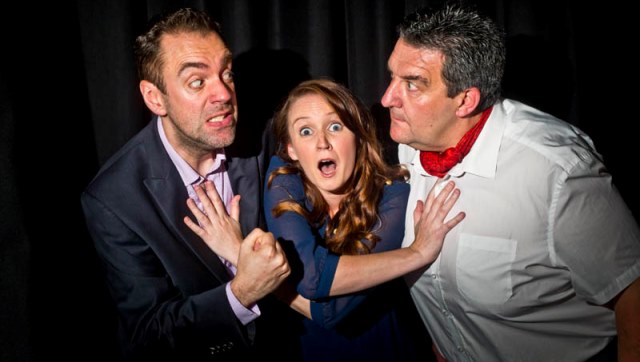 The Lime Tree Theatre had the pleasure of catching up with Patricia Routledge (Hyacinth Bucket in ‘Keeping Up Appearances’). Patricia starred in the Premiere of ‘Noises Off’ at the Lyric Theatre London.

Brace yourself for comic chaos! Rip roaring, endless entertainment is the  best way to describe College Players Theatre Company’s forthcoming  production Noises Off by Michael Frayn. Following last years smash hit “The Rise and Fall of Little Voice”, and comedy hits in recent years such as “Lend Me A Tenor” and “Leading Ladies”, Limerick audiences are in for another wonderful night of theatre.

The winner of many awards including the Laurence Olivier Award for Best Play and London Evening Standard Award for Best Comedy, ‘Noises Off’ has often been hailed as one of the funniest British comedies ever written. It presents a manic menagerie, as a cast of jobbing actors in the chaotic throes of dress-rehearsing a flop called ‘Nothing On’. Doors slamming, on and offstage intrigue and numerous plates of sardines, all figure in the plot of this hilarious and fiendishly clever play, as the company stumble their way through a shambolic first night and onwards to a final disastrous performance.

“The most dexterously realized comedy ever about putting on a comedy! A spectacularly funny, peerless backstage farce; this dizzy, well known romp is a festival of delirium!”  The New York Times

This excting production of “Noises Off” is under the measured direction of erstwhile actor,  Dave Griffin. A multi-talented and highly versatile cast has been assembled including College stalwarts, Brian McNamara, Rebecca Murphy and Padhraic Hastings, in addition to a warm welcome back to Liam O’Brien and Chris Rowley, and a first welcome to the College stage of Miriam Ball, Sadhbh McCoy, Rachel Griffin and Dan Mooney.

You can see this production from 10th to 14th November at Lime Tree Theatre. Tuesday night 10th Nov will support various local charities and all tickets on Wednesday night 11th Nov are only €10.

Don’t miss out!  Get your tickets here.

Read more about upcoming events at The Lime TreeTheatre here.

Launch of the new LCETB Further Education and Training Centre