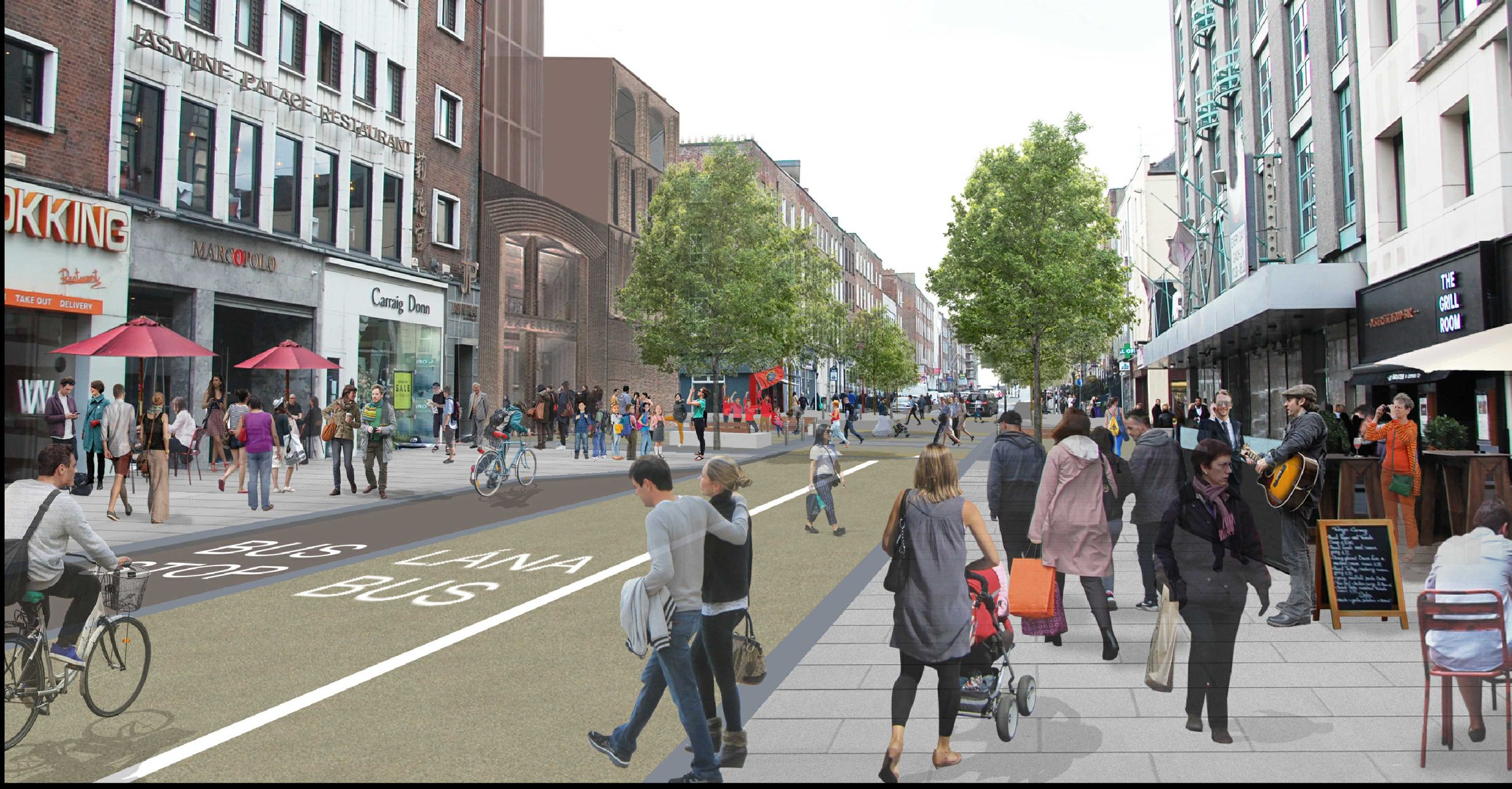 The aim of O’Connell Street Revitalisation Project is to breathe new life into the area for pedestrians and residents, to redefine its role as a ‘destination’ within Limerick City and the greater Mid-West region, support more sustainable modes of transport, and provide a stronger and more visually appealing and attractive city centre.

The overarching aim of the project is for the street to be a primarily pedestrian priority while being flexible in use.

Maria Donoghue, Architect and Head of Design and Delivery Department with Limerick City and County Council, which is leading the project said: “The O’Connell Street Revitalisation Project places pedestrians at the centre of our vision. The street will be a designated ‘pedestrian priority’ area whereby pedestrians can move with more ease through the street, parking will be removed and footpaths widened and the speed limit will be reduced to 30km/hour.”

“Following significant consultation with key stakeholders and the general public the proposals for O’Connell Street have evolved to ensure that there is the flexibility to adapt to the inevitable changes in future movement and use patterns.”

“We want citizens, businesses and groups to take advantage of the enhanced public realm we are offering – O’Connell Street will become a destination, not a thoroughfare. With the wider footpaths, high-quality street furniture, reduced traffic volumes and enhanced landscaping, this will become a more comfortable environment for Limerick’s citizens and visitors to animate this new backdrop with the vibrancy we want it to facilitate, and participate in urban life such as on-street cafes and outdoor exhibitions or performances.”

The O’Connell Street Revitalisation Project will create a backdrop to a more positive engagement with the city through much-reduced traffic volumes, greater cyclist and bus accessibility, wider and improved footpaths, reduction in urban clutter, increased landscaping and trees.

It will contribute to a more pleasant environment for those who currently live and work in the city centre and will have flexible uses.  For example, the installation of bollards at the junction with William Street can easily create a pedestrianised zone for special events.  The street will continue to be used for Limerick St Patrick’s Day Parade and the International Band Championship.

The project is future-proofed as the street can be quickly adapted when the Transport Strategy for Limerick is completed.

This project aligns with the aims of the recently launched Climate Action Plan in June as it promotes sustainable modes of movement such as walking, cycling and public transport.

This approach will contribute to the reduction of carbon emissions in the City and promote sustainable forms of movement including a significantly increased pedestrian space together with shared cycling that encourages a further reduction in car usage.

With a dedicated bus lane for three blocks, the project will increase the visibility and accessibility of public transport. The removal of on-street car parking will improve bus access to serve at bus stops and reduce risks for cyclists travelling along the street.

The narrowed carriageway and raised tables at junctions will also improve ease of pedestrian crossing of O’Connell Street and the side streets at each junction.

It is proposed that the project will be tabled for decision at the September meeting of the Metropolitan District of Limerick and it is anticipated that work will commence on this long-awaited project in early 2020.

As part of the project, Limerick City and County Council is piloting a new way of obtaining submissions from the public and other groups.

MyPoint is an online portal, which will increase the level of public consultation and the quality of submissions allowing Limerick City and County Council to get more detailed feedback from the public and other groups. More information about the project and how to make a submission is available on https://mypoint.limerick.ie/

Submissions either via MyPoint (https://mypoint.limerick.ie/) or by post to the Planning Department must be submitted/ received by Friday, September 6 2019.

Related Topics:Limerick City and County CouncilMyPointO Connell Street
Up Next