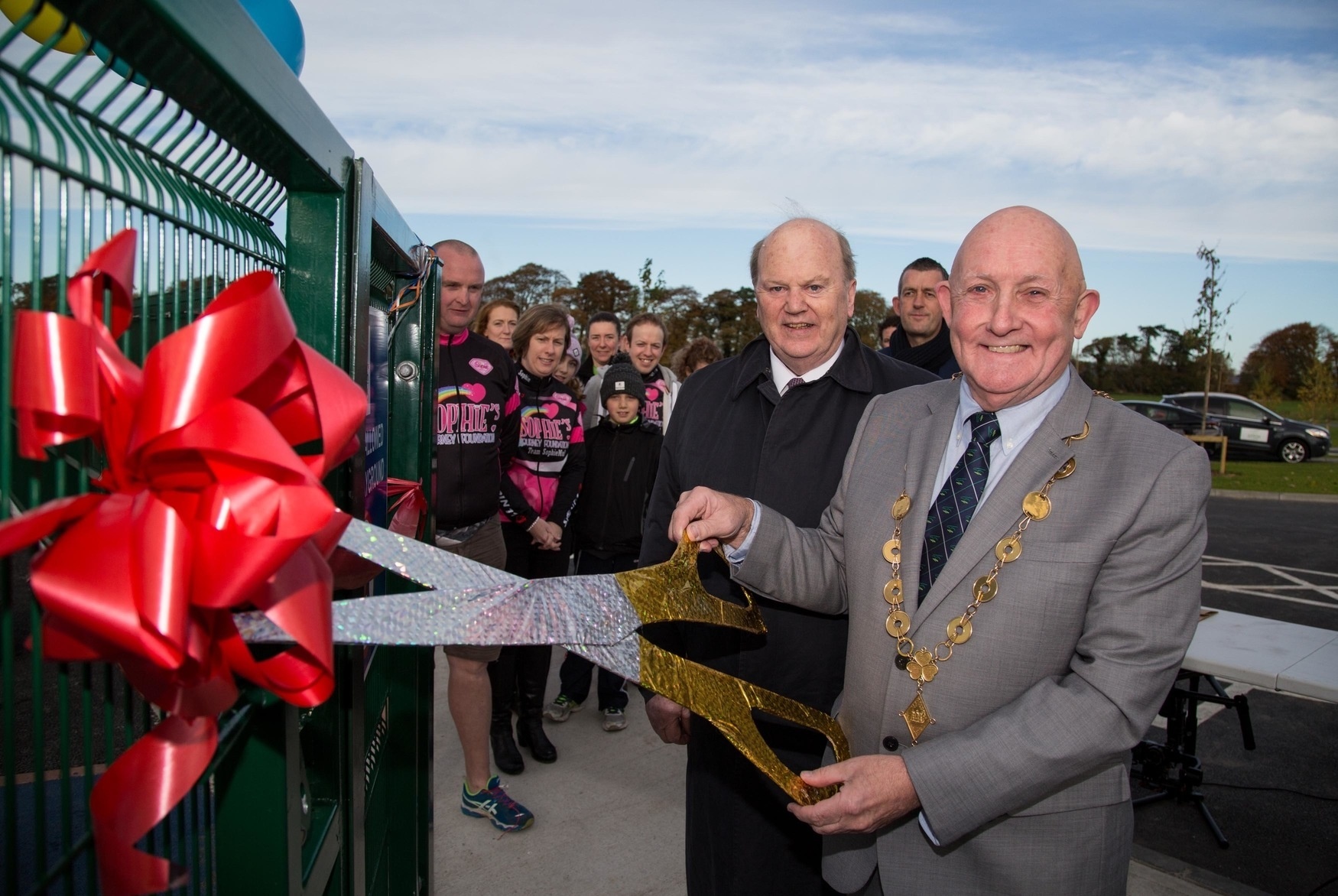 Mungret Park officially opening  to the public: Minister for Finance and TD for the area Michael Noonan and Mayor of the City and County of Limerick, Cllr Kieran O’Hanlon. Picture: Alan Place.
Children and adults of all ages and abilities will be able to use the new Mungret Park, which has been officially opened today.
The opening of the new playground and more than two kilometres of walk and cycleways will allow people of all abilities to enjoy the surroundings and get some all-important exercise at the same time.
The playground, which has been constructed by Kompan caters for children of all abilities, with a special sensory section developed.  The Cycle 4 Sick Children charity raised €10,000 towards the development of the playground, while Sophie’s Journey Foundation also provided invaluable assistance in the design.

The total cost of design, construction and landscaping was €1.2 million.

The opening of the new playground and more than two kilometres of walk and cycleways will allow people of all abilities to enjoy the surroundings and get some all important exercise at the same time. Picture: Alan Place.

The area is steeped in archaeological features and has Mungret College in the background to add to the overall amenity value.
Adult exercise equipment has been installed along the more than two kilometres of walk and cycle trails.
The playground will be open from 8.00am to 9.00pm from May to September and 8.00am to 5.00pm, from October to April.
Mungret Park is the first phase of the massive development.  So far plans are advanced for three schools on the site (two primary and one post-primary).  Land has also been given to local sporting organisations, while further developments will be brought before the council.
Mayor of the City and County of Limerick, Cllr Kieran O’Hanlon has welcomed the Mungret Park development.
“This is just the first phase of the Mungret Park.  The park and playground is on an 11-hectare site.  The playground comprises of 3,000 square metres and is specifically designed to accommodate non able-bodied children as much as possible.”
“With over 200 acres in total in the ownership of Limerick City and County Council, I’m confident that the people of the area and further afield will benefit from future developments.  These include three schools, additional lands given to sporting organisations, and the possibility of new homes.”
Minister for Finance and TD for the area Michael Noonan said: “It’s an amazing facility for Limerick city and particularly for this neighbourhood, with more than 200 acres of land here ready for development.  It’s great to see after forty years of usage that it’s developing again.”

“I’d like to congratulate Limerick City and County Council, it’s the start of a major development , very often an official opening is conclusion of something but this is the start, it’s a great facility, which for a long time the councillors have been looking for.”

Minister for Finance and TD for the area Michael Noonan and Mayor of the City and County of Limerick, Cllr Kieran O’Hanlon took time after the opening to take a tour of the playground. Picture: Alan Place.

Tara Flanagan Senior Executive Engineer with Limerick City and County Council on the project said: “We opened the playground in August to allow children and their parents avail of the wonderful facilities during their summer holidays.  The playground has proved a fantastic success, with great feedback coming back.” “We have designed the playground with input from members of the Cycle 4 Sick Children charity so we can cater for children of all abilities.”
“Our 2 kilometres of walk and cycle paths have stunning views from the top of the site, while adult exercise equipment and benches have been provided to help people continue to be healthy and do some exercise.”
“Limerick City and County Council would like to remind people using Mungret Park to park their cars responsibly.  Please park in designated car parks, and not on the main road or in the housing estates.  The designated car parks are signposted.  It is necessary to follow the parking regulations and unfortunately these may include the issuing of fines, as illegally parked car are causing issues for the majority of those visiting Mungret Park or living nearby”.
For more information on Mungret College, click here.
To read more on recent openings in Limerick, click here.