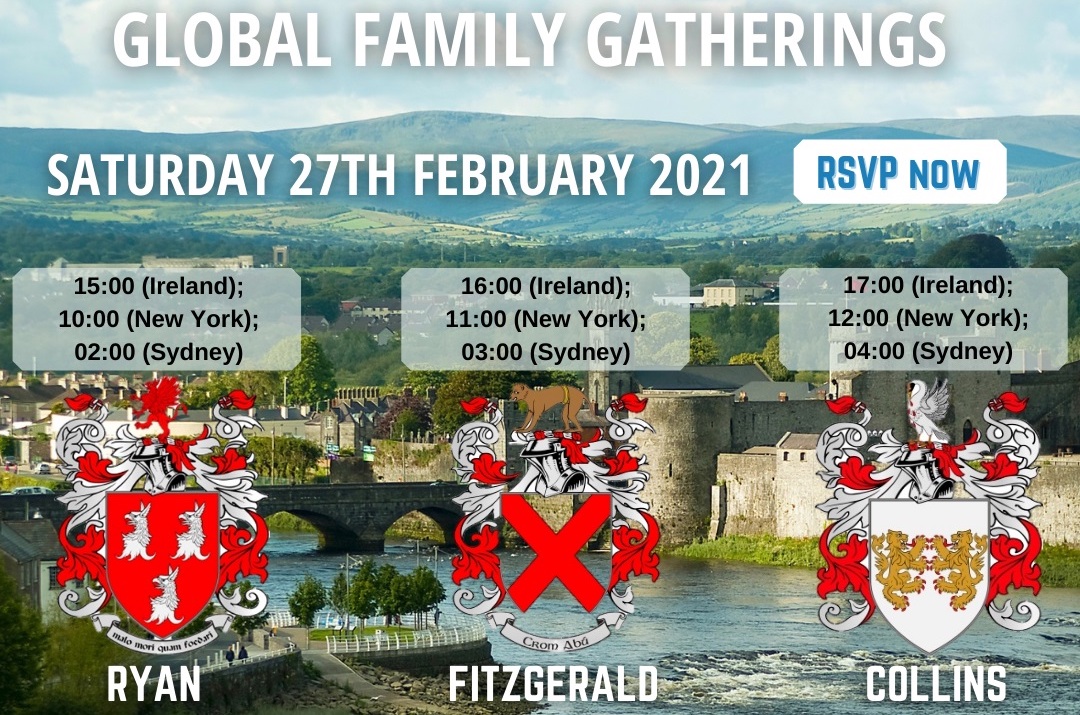 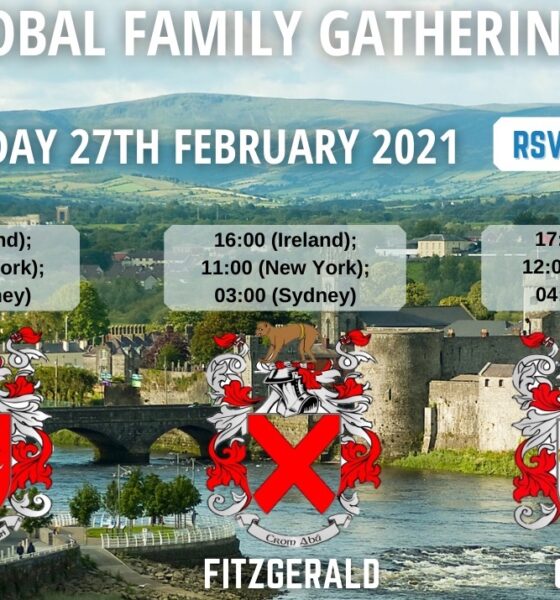 This year’s Online Tribal Gatherings will take place this Saturday, February 27 2021. Each year, the event makes an effort to focus on Irish family names to connect descendants from all over the world. Last year O’Malley’s from every corner of the globe participated in this incredibly special event, while this year is emphasising the family names, Fitzgerald, Ryan, and Collins

The annual event which is run by Ireland101.com and kindly sponsored by Limerick.ie and Limerick City and County Council will give people from all over the world a chance to connect to people who descended from the same tribe, under the name Fitzgerald, Ryan, or Collins. This event holds significant importance and gives a chance to 1.98 million members of these Irish tribes from all around the globe to learn more about their heritage while celebrating their historical connection to Limerick.

Stephen Treacy, who runs Ireland101.com explained that, “we work with local Governments to mobilise their Diaspora around tourism, business, community and heritage initiatives. While we all know there are 70 million Irish Diaspora around the world, ultimately Diaspora is all about families and villages. In order to reach out to the Limerick Diaspora, we decided to pick the top family names with Limerick origins and have an online gathering with the goal of having a series of physical gatherings in Limerick in 2022. Since Covid, there has been a 400% increase in Diaspora that want to participate in online gatherings.”

The event will be split into three sections, with an allocated time slot being given to each surname that will feature in this year’s online meetings. The meeting for the Ryan’s will be held at 3 pm, with the meeting for the Fitzgeralds taking place at 4 pm, the last meeting of the day for the Collins gathering will take place at 5 pm (all Irish time). Each meeting will be fifty minutes long. The host for this year’s event will be presenter Meghann Scully who will introduce a range of families and well-known faces. The Family History Centre will also talk participants through the history of the family names.

Ryans, Fitzgeralds, and Collins's are invited to online family gatherings on the 27th February 2021!

Please share the message to the 1.98 million members of these Irish tribes! 💚 RSVP here:

Sean also added that, “Our researchers have calculated that globally there are 637,524 Ryans, 301,958 Fitzgeralds and a staggering 1,041,374 Collins, which is a total of 1,980,856. We know that not all 1.98 million people are of Limerick descent; we do know that each of their tribes had a connection to Limerick and we take this opportunity to shine a light on it.”

Please RSVP and send this link HERE to any Ryan, Fitzgerald, and Collins family members around the world.

For more information on the gathering go HERE

Related Topics:Limerick City and County CouncilOnline Tribe Gatherings
Up Next