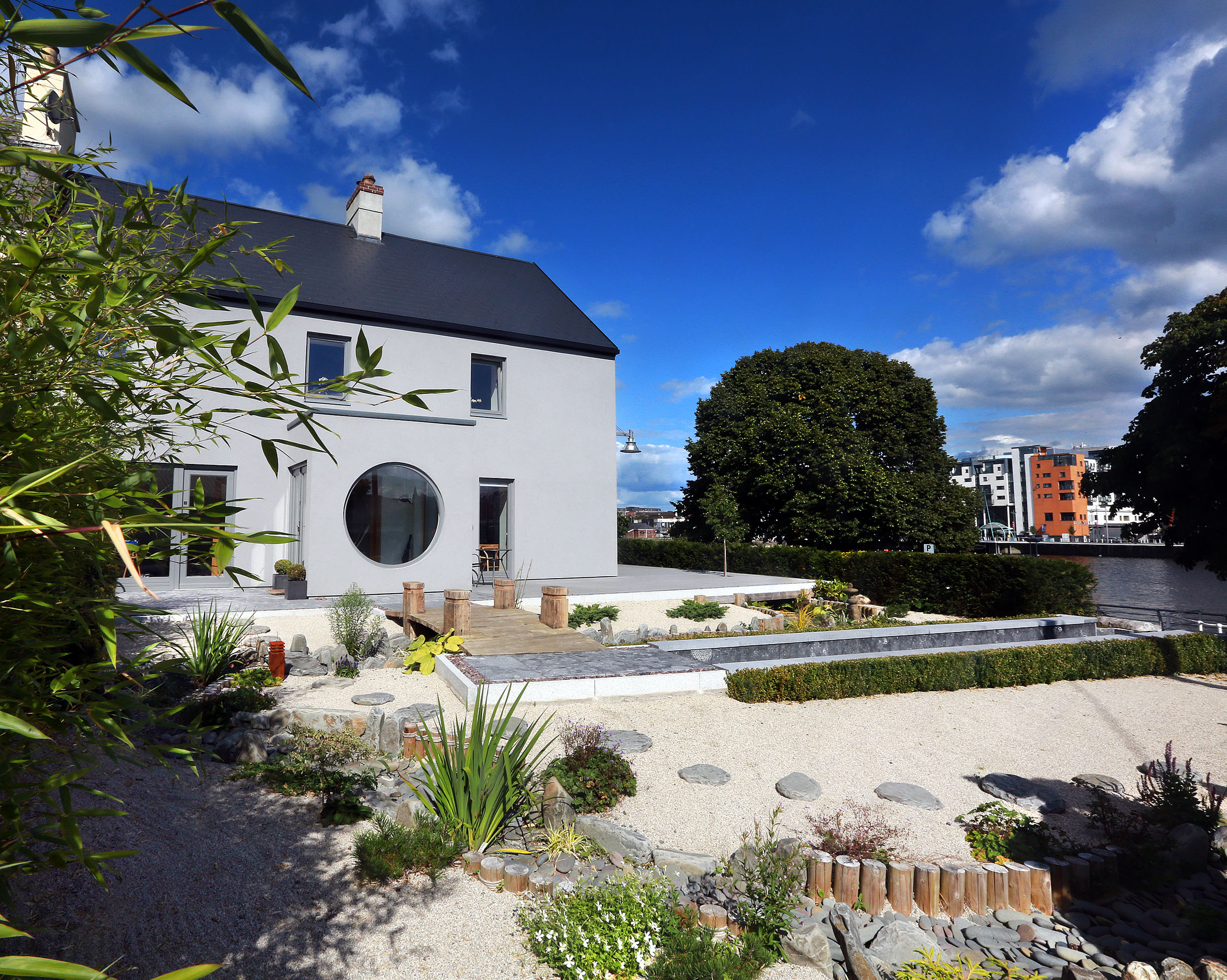 A talk on the Particles and Waves installations will also be given during this year’s event.

The doors of some of Limerick’s most intriguing and historic buildings will be open to the public for free during OpenHouse Limerick 2014, details of which were announced on Monday, September 22, 2014.

The 19th century railway station house at Patrickswell, the new Mortuary Extension at University Hospital Limerick, Ardnacrusha Power Station, Limerick Circuit Courthouse, the Quaker Meeting House at Punches Cross and Sarsfield Barracks are amongst more than 30 buildings scheduled to be opened to the public, some for the first time, during the third annual initiative from 3rd-5th October.

Open House was first established in London in 1992 to show first-rate architecture to the general public, stirring an interest for urban built heritage. Limerick is a member organisation of the Open House Worldwide Family which also includes London, New York, Helsinki, Melbourne, Slovenia, Barcelona and Dublin.

The medieval Castlegarde building in Cappamore, the new academic block at Glenstal Abbey School, St. Mary’s Cathedral and the Munster Council GAA Headquarters at Castletroy will also be opening to the public as part of this year’s initiative, which is hosted by the OpenHouse Limerick Committee.

“OpenHouse Limerick 2014 is the 3rd year hosting this annual architectural festival weekend, which is all about showcasing architectural excellence for the public to experience, completely free of charge,” explained Margaret McEvoy, Chairperson of the Limerick OpenHouse Committee.

She continued: “In this year of Limerick City of Culture, the people of Limerick have another opportunity to explore and engage with buildings of the city and county. A wide and diverse range of Limerick buildings both old and new, with more homes this year, will be open to the public.

Ms McEvoy noted that as in previous years, all buildings will be staffed by volunteers, with tours by professional architects or historians. “Most OpenHouse 2014 tours and events will operate strictly on a first-come first-served basis, simply turn up during the listed opening times and join the next available tour,” she stated.

Paul Lynam is the owner of Stonehouse on O’Callaghan Strand, a mid-19th century cottage that has been transformed into a 21st Century property with an integrated Japanese stone garden.

Speaking ahead of OHL, he said: “At last the river is playing an important part in Limerick and buildings are increasingly facing the river. Stonehouse is a part of this trend. I was amazed at the size of the queues last year to visit Stonehouse and I am very happy to be partaking again in OpenHouse Limerick and to welcome people to see the 21st century conversion by Seamus Carr of this 1850s fisherman’s cottage.”

OpenHouse Limerick 2014 will be launched on Friday 3rd October at 5.30pm at the Dance Limerick Space in John’s Square with a performance by art collective Gothicise, a collaboration between Limerick School of Art & Design, LIT, Irish World Academy of Music and Dance in UL and independent artists. ‘Waking St. Munchin’ will bring the curse of St. Munchin to rest through cathartic rites of song music and performance.

51 O’Connell Street will be the venue for ‘Mortuary Mosaic’, a portrait of the 19th century chapel by Feeney McMahon Architects and Aglet Architects. The exhibition focuses on the interior spaces and internal decoration of the chapel which has been lost from public view for 30 years. Supported by Limerick City of Culture 2014, the exhibition will be open during each day of OpenHouse Limerick with a presentation by the organisers at 2pm on Saturday and Sunday.

On Friday to Sunday, 69 O’Connell Street will host Beta-Block, an architectural exhibition featuring work in progress by various Limerick architects and asking the question of whether 21st century life can flourish in 18th century houses. The exhibition takes the form of a large architectural model of one Georgian city block, within which complementary visions for future city development are explored. This exhibition is supported by Limerick City of Culture and features a discussion at 3pm on the Saturday and Sunday hosted by architects.

Tour Guide David Lee will host a walk focusing on the work and achievements of Limerick-based 19th century architect, James Pain. Known for his country homes and churches, he also designed a wide range of other building types. David Lee is an authority Pain and is the author of ‘James Pain Architect’, the first book devoted to the architect’s work. The 75-minute walk commences from Jack Monday’s Coffee House on Thomond Bridge Saturday 4th October at 2pm.

The Limerick Chapter of the Irish Georgian Society will present a one-hour walking tour focusing on the building of the earliest Georgian Houses in Limerick in 1769. Meeting at Bank Place at 2pm, Conservation Architect Cáit Ní Cheallachain and Historian Dr. Ursula Callaghan will host the ‘Turning Limerick Around’ walk, the route of which will include Bank Place, Uzuld Bridge/Matthew Bridge and Rutland St.

At 3.30pm on Saturday, tour guide Tracy Collins will host a one-hour walk entitled “Limerick: A Tale of Three Cities”. From its origins as a Viking settlement through to the high medieval period of the twin walled areas of Englishtown and Irishtown, to the open city of Newtown Pery, the walking tour provides an introduction to the archaeology and architectural built heritage of historic Limerick.

All tours and walks are organised by the participating institutions in cooperation with the OpenHouse Limerick Committee.

The Hunt Museum will also open its doors on Saturday 4th October at 3pm when members of the public will be able to discover the architectural stories, nooks and crannies the collection has to offer. At the same venue, also on Saturday, Fab Lab collaborator Sean Collins will host an innovative children’s workshop entitled ‘Ar-Kid-Tecture’ from 2.30pm to 4.30pm. Children will discover architecture by building a city through arts and crafts. The event is for children aged 7 and over and must be pre-booked via [email protected]

In the run up to OpenHouse Limerick 2014 2014, children in five primary schools across Limerick are participating in OpenEducation, Imainging: my home, my neighbourhood, my city, a Made in Limerick, Limerick City of Culture 2014 funded project. Over the course of four weekly sessions, led by OpenHouse Limerick’s artist/architect team of Caelan Bristow, Seán Collins and Nicola McMahon, the students will be brought through the concepts of art, design, architecture and space to create their own individual pieces.

Meanwhile, OpenHouse Limerick 2014 is this year running a photography competition on Flickr and Instagram. Organisers are looking for photographs that show how the public engages with, is inspired by and interacts with the buildings featured in this year’s programme. Winners of the OpenPhoto competition will be exhibited and prizes will be provided.

For more on the photography competition and for further details on the OpenHouse Limerick 2014 programme visit www.openhouselimerick.ie or contact 061-407188 / [email protected].

Be one of 150 volunteers and join the celebrations at the heart of this year’s OpenHouse Limerick architectural festival. Contact Michelle O’Donnell, Project Manager Ph: 061 407188 Email: [email protected].