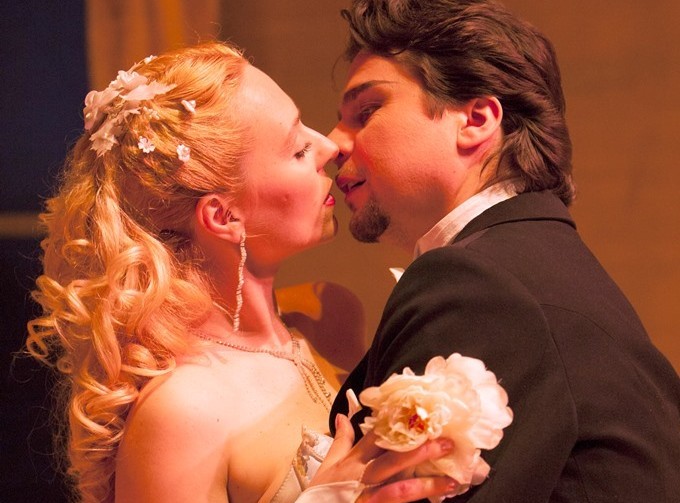 The award winning producer Ellen Kent returns to University Concert Hall this April after her recent critically acclaimed British and Irish national tours of Nabucco, Aida and La Boheme. Her stunning, traditional production of Verdi’s masterpiece, La Traviata, comes with sumptuous sets and costumes by the renowned Ukrainian designer Nadia Shvets from the National Ukrainian opera of Kharkiv. Accompanied by a host of international soloists from the national operas of Odessa, Spain and Rostov and the support of the National Philharmonic in Chisinau, Kent’s La Traviata has played the Royal Albert Hall to well-deserved critical acclaim.

Kent has had many adventures over the past 22 years producing Operas from Eastern Europe, working with Presidents and National opera houses throughout. She even encountered the Orange Revolution in Odessa, which broke out during her rehearsals of Butterfly and Traviata in 2005. This year Ellen set out to work on a tour with The Ukraine National Opera in Kharkiv and found herself 6 miles from a very bloody civil war. Kent thought: “Here we go again.” But as she previously said in 2005, “The show must go on!” She was still prepared to travel and rehearse in Kharkiv, but was persuaded by the British Foreign Office not to travel due to fatalities and kidnappings, not to mention bombings in the area. With the support of the Kharkiv Opera, Ellen managed to transport the complete sets, props and costumes for all three productions, despite being close to the bombing and insurgents robbing transport on the Ukrainian roads. Ellen moved the entire operation to the safe haven of the National Opera of Moldova where she has worked for over 18 years. Ion Grosu, the director, offered Ellen the entire support of the opera house to enable Ellen to complete the project. The company on tour, where the operas are receiving excellent notices, includes Ukrainians, Moldovans and Russians all working together in perfect harmony.

La Traviata is Verdi’s outstanding interpretation of one of the most popular love stories of the 19th century – La Dame aux Camelias by Alexander Dumas, a tragic tale of searing passion and memorable music. Dumas made no secret of the fact that his book and play were autobiographically based on his own affair with Marie Duplessis, who died in 1847 of tuberculosis at the age of 23. Kent was fascinated by the book which she read whilst rehearsing Traviata in the Ukraine in 2011. Kent adds a scene from the book to the overture where Dumas, known in the book as Amand, attends an auction at a Paris apartment not realising it’s his ex-mistress who has recently died and her objects are being sold off to pay her debts. Starring opposite Alyona Kistenyova is Ruslan Zinevych, the international Ukrainian tenor who sang many times in Italy including singing with Pavarotti. Winner of many international awards, Ruslan has sung many times for Ellen over the last few years including her La Traviata at the Royal Albert Hall and continues to impress audiences with his passion and power. He made his debut as Alfredo in an Ellen Kent production is the Spanish Tenor Giorgio Meladze. Originally from Georgia, he has acquired critical acclaim in Europe, singing in Milan, Spain and across the continent. Giorgio Meladze sang with Jose Carreras at the Austrian opera festival Tiroler Festspiele Erl this summer. Maria Tonina will be starring as Violetta. In 2005 her operatic talent won her a scholarship from the CEE Musiktheater, Vienna, which led to taking part in the Summer Academy Master Classes in Heiligenkreuz, Austria.

This operatic version of La Dame Aux Camelias tells the romantic story about the love and life of the courtesan, Violetta. Based on a true story, it tells of the passionate consumptive Violetta and her doomed love for the aristocratic Alfredo. There are many echoes of Verdi’s own life in Traviata and he threw himself into the music. This was also Verdi’s venture into operatic realism as was Rigoletto, rejecting distant historical settings. The highlights include the Brindisi, the best known drinking song in opera, the duet Un Di Felice and the haunting aria Addio Del Passato.

The clarity of the plot seems matched by a single moral idea – that enduring love can and does survive despite all efforts to corrupt it. If in Puccini’s Madama Butterfly, it is Pinkerton’s callous abandonment of Butterfly on which the tragedy hinges, in Traviata it is Alfredo’s dogged determination to stand by his fallen woman, against all odds, which brings out a sense of redemption. Brilliantly, only in death, are Violetta’s bourgeois values relinquished, and she is redeemed, ultimately, not as a fallen woman, but a risen one.

The production will be sung in Italian with English subtitles.

You can book tickets by contacting 061 331549, or on the University Concert Hall’s website here.

Read about performances in the UCH here.