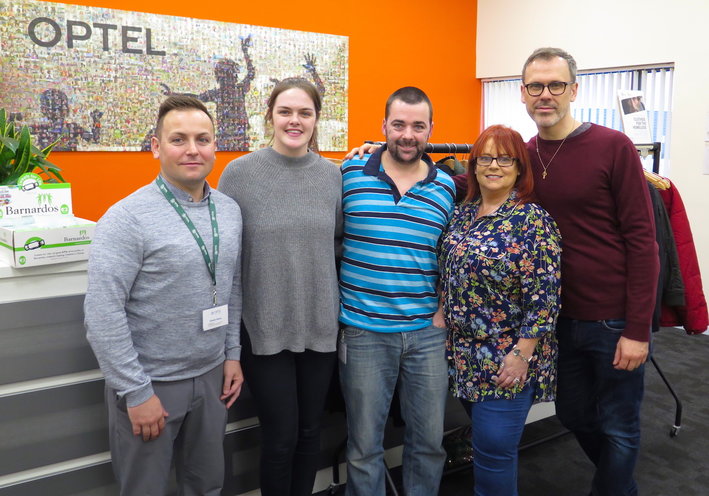 The Limerick branch of the Optel Group has been an incredible force in charity work in Limerick and continue to do amazing work for projects throughout the City and County. Every year the company pick a different charity to fundraise for and this year they have chosen Barnardos and Pieta House as their chosen charities.

The CEO of Optel, Louis Roy is very involved in charity work and encourages his employees to fundraise as much as possible. He is focused on making the world a better place and he sets out budgets each year that the employees can then use to help charities. He has already promised that if Optel raises €10,000 for their chosen charity this year then he will match that donation himself. Just some of the fundraisers that the employees have taken part in over the last year are table quizzes, Movember, raffles and jersey days.

In August employees took part in the Back to School for Barnardos initiative, which involved employees donating stationary and school supplies to children who could not afford their own. Employees donated stationary, school bags, pyjamas amongst many other items even including children bikes.

Some of the volunteers who helped re-decorate classrooms at Gaelscoil Saoirse.

Optel has been heavily involved in charity work since its inception in Limerick three years ago and once again this Christmas they are donating to a worthy cause. Employees have donated coats and jackets to a project set up by Audrey Ryan which provides coats to the homeless over the winter. Optel employees have donated over 250 coats to the cause. The coat shelter will be located in Arthur’s Quay Park.

Martin Leonard from the fundraising committee in Optel spoke to ilovelimerick about one of the initiatives run by Optel. Some of the team visited Gaelscoil Saoirse to help decorate and paint some of the classrooms used for after-school care. “We had a brilliant day in Gaelscoil Saoirse doing the classroom revamp. Over 270 hours were put in by members of staff, family, and friends. I would also like to recognise Noel Mounsey Painters who volunteered on the day.

The classrooms themselves were in very bad condition. We visited the site in August and decided to take on the ambitious task of fixing four classrooms on a Friday afternoon and Saturday. Months of planning went into the day and we had four classrooms so we got four teams together. In each room, we had a team leader and then we got an arts and crafts team together. Optel has a charity fund which we used to buy materials for the day.  We approached Tom Mousney ltd, a painting company to ask them if they would be able to donate paint. When we told him what we needed it for he told us that not only would he supply the paint but that he would come on the day as well to help us out”

Optel currently has 136 employees in Limerick. Now a Certified B Corporation, OPTEL is a leading multinational provider of traceability systems, and its mission is to use its innovative technologies to create a better world through responsible capitalism. The company’s renowned solutions ensure the quality of consumer health products and help stop counterfeiting of pharmaceuticals and medical devices throughout the world. OPTEL is also adapting its technologies to create efficiencies in various other sectors ─ from health-related industries to smart manufacturing and more, all can benefit from global traceability. OPTEL’s expertise will allow diverse industries to measure, inspect, control and track a variety of elements to improve quality and make better use of resources.