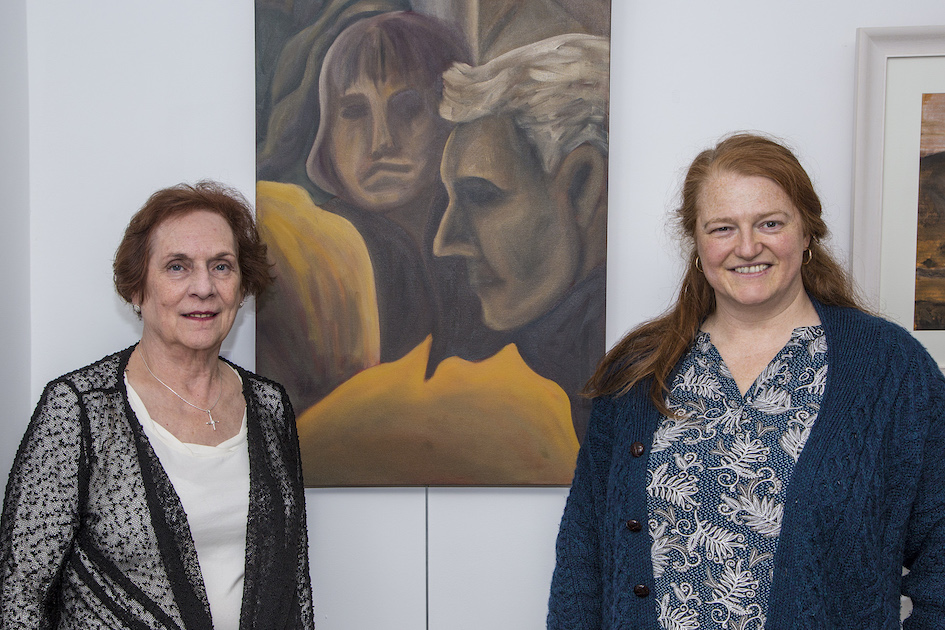 Photo taken at the opening of Orla Clancy’s exhibition with County Limerick paintings in the Red Door Gallery in Newcastle West, County Limerick. On the left Vicky Nash and on the right Orla Clancy. Picture: Dolf Patijn.

The Wrenboys portrait by Orla Clancy.

Newcastle West Arts are hosting an exhibition entitled “Limerick: Land and People” which consists of work by Limerick-based painter Orla Clancy, curated by the artist herself. The fantastic exhibition will be on display in the Red Door Gallery, until Saturday, May 12th, opening times Thurs, Friday and Saturday, 12.30pm – 4 pm.

When asked about the exhibit, Orla Clancy commented on how, “I wanted to include people, places, and experiences I’ve had here, that people can relate to, so I chose artworks that reflect that: social life in pubs, bodhrán-playing competitions in rural villages, old-time Rambling Houses, but also landscapes which have a particular resonance.”

The exhibition includes an oil painting of a small group of Wrenboys intense conversation, and the text beside it describes the Wren as ‘shaking the dusty, cobwebby bones of ecclesiastical December’. These sketch-style paintings are not portraits as such – but clearly, Clancy has no problem with portraiture, as the exhibition includes two portraits, the subjects easily recognisable – but rather portray the dynamics of communication and contact between random people.

There is a narrative suggested, and you’re free to speculate on what it might be, and fill in the blanks and finish the story yourself. You wonder what they were talking about. Indeed, it’s easy to imagine children daring each other to go over and ask the lady what she’s drawing – many of Clancy’s figures are random figures, groups of people sketched very roughly on location, unposed. Occasionally they are looking back at her.

The pictures of people alternate with the landscapes, and it works surprisingly well. There are three works with the placename Knockfierna in the title, which means Hill of Truth in the Irish language, and is close to where Clancy lives with her Dutch partner Dolf Patijn. Two of these are landscapes, one a sketch of the hill from the valley below, and the other a view of the old Famine-era village from the top of the hill. Here is some of that resonance Clancy mentioned: folk memories of evictions, and of starvation during a very difficult time. Hedgerows are historic markers, trees become keepers of tales, and there are suggestions of lost ringforts, as well as hidden cottages where old-style céilíthe still take place.

Orla Clancy is an artist who is acutely aware of history, both as it has come to us, and as it is being made, and of life, all of which is clearly apparent in her art. All of this would not have been possible without the support of Newcastle West Arts, Viki Nash and Claire Geary.

For more stories on exhibitions in Limerick, go here.