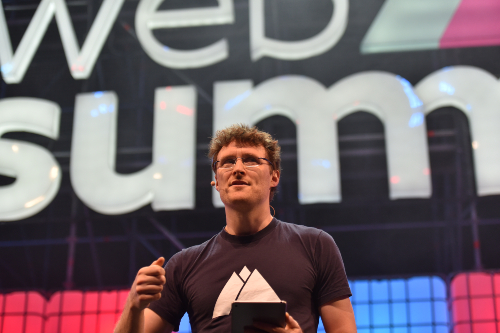 Paddy Cosgrave is CEO and Co-Founder of Web Summit, a global technology conference hosted annually in Lisbon
Limerick Civic Trust to Host Paddy Cosgrave at Christmas Business Lunch Fundraiser
This Christmas will be ushered in with a novel fundraiser event from Limerick Civic Trust. A Christmas Business Lunch will take place in No. 1 Pery Square Hotel, where ticketholders will enjoy lunch with a talk from Paddy Cosgrove, and an opportunity to network with fellow Limerick entrepreneurs.
The event, at No 1 Pery Square Hotel, will take place on Friday, December 13.
All proceeds from ticket sales go to supporting the work of the heritage non-profit charity, who has been restoring and maintaining Limerick’s historic streets and monuments since 1983.
Paddy Cosgrave is CEO and Co-Founder of Web Summit, a global technology conference hosted annually in Lisbon. In 2018, more than 70,000 attendees from over 170 countries flew to Lisbon for Web Summit, including over 20,000 companies, 7,000 CEOs, and 2,600 international journalists.
Speakers included the founders and CEOs of the world’s largest tech companies as well as political leaders and major sports, fashion, and music personalities. In less than 8 years the Web Summit has grown from a small team of three people to a company of over 200 people with operations in Dublin, Lisbon, Hong Kong, Toronto and making hires in London, Amsterdam, Berlin, Shanghai, Singapore, Beijing, New York & San Francisco. Paddy graduated from Trinity College Dublin in 2006 with a BA, MA in Political Science and Economics. He worked in a number of start-ups before setting up Web Summit in 2009 with his co-founders.
Limerick Civic Trust is a self-funding charity, which initiates and undertakes a programme of projects for the general improvements of Limerick’s environment in conjunction with local authorities, state agencies and all the sectors of Limerick’s commercial, professional, industrial and community life, all of whom share a common vision of the betterment of Limerick.
Tickets can be purchased from Event Brite or from Limerick Civic Trust headquarters at the Bishop’s Palace, Church Street, King’s Island, Limerick.
For more information click here.
For more stories like this click here.