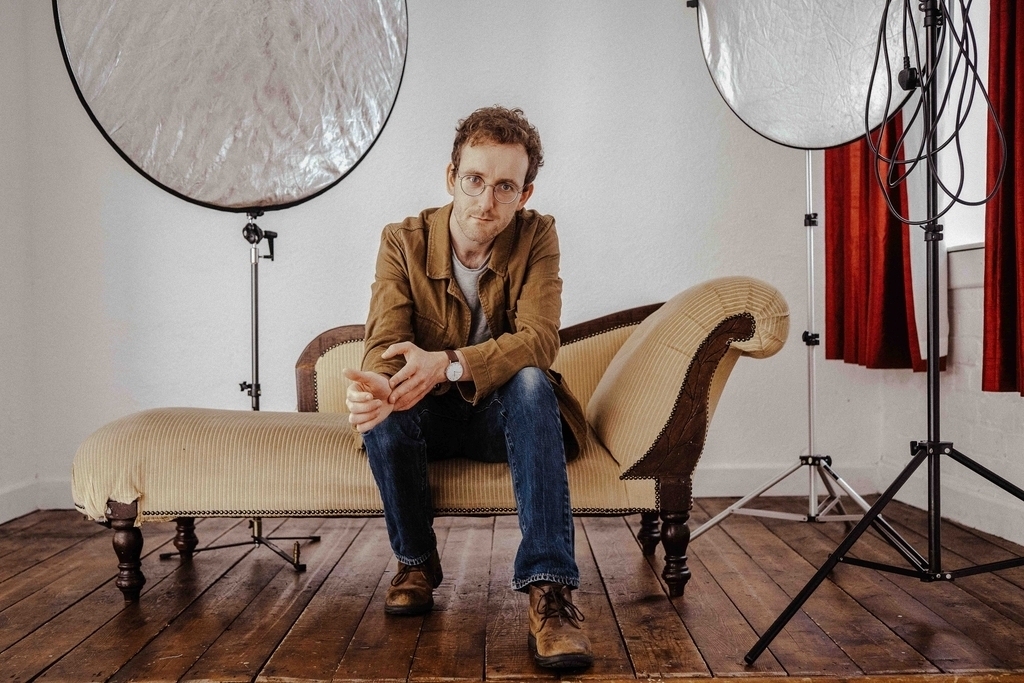 Paddy Dennehy Limerick – Paddy pictured above is set to release a brand new album ‘Love and Be Brave,’ in 2023.

Paddy Dennehy is a folk singer-songwriter, originally from Limerick, now based in Cork. Today, he has officially announced a new album ‘Love and Be Brave’, to be released in Spring 2023, and shares the first song from it, ‘Heaven Not Far’.

Speaking of the song, Paddy says, “This is my little humanist prayer. I’m not shying away from any of the problems that I think we all face – accepting death, the search for hope, the search for love, social media – but I wanted the main theme of the song to be the incredible potential to make something wonderful, wherever you happen to be, right now.”

As a child, Paddy Dennehy would rush to get a guitar or play the piano very loudly in the hopes that you might hear it and request a song before you left. It was often requested of him to play more quietly or to stop ‘hitting’ the piano. Another frequent suggestion was that screaming the notes that he found difficult to sing did not make them sound any better. He was not imbued with a keen sense of subtlety or restraint, but he has been working on this over the years.

He has always loved songwriting and was blessed with a wonderful piano teacher that would stay late to hear what he had written that week. He studied classical piano, but it was the extra bit at the end of the lesson that he lived for every Thursday for almost fifteen years. He got to learn about music theory, the shape of songs, how a melody worked and didn’t work, and why you had to learn your scales.

It may come as little surprise then that Paddy followed his mentor into teaching. It sometimes calls for late nights rehearsing, writing, or driving back from a gig after putting down a day’s work – but it has been worth every minute of sleep lost. There is nothing like a five-year-old child telling you, not asking you, to tie his shoes to keep you in line. Neither is there anything like feeling that you have connected with an audience.

Paddy’s musical influences have changed greatly over time. Boyzone do not retain the place they once held in his heart. He grew up listening to whatever his parents, sisters and brother would leave unguarded around the house. His first real sense of feeling a connection to music was listening to Mick Flannery perform ‘Evening Train’ on the ‘Late Late Show’. The very next day he walked into HMV in Limerick with his Walkman and bought that album. He listened to it all the way home and for weeks afterward again and again. From here there is a clear trajectory of influences – Mick Flannery led him to Tom Waits. Tom Waits led Paddy to Randy Newman who would lead on to Nick Cave. Other influences would surface in later years but Flannery, Waits, Newman and Cave have formed the bedrock of Paddy’s music.

Paddy’s first album ‘Little Light’ was released in June 2020 to both critical acclaim and a well-documented pandemic. He received glowing reviews from Hot Press Magazine in Ireland, Folk Radio UK, and Rolling Stone France, to name a few, and learned how to teach children whilst wearing an FFP2 face mask. The songs on that album and his lucky stars have allowed Paddy to share a stage with the likes of Mick Flannery, Glen Hansard, Imelda May, and Lisa Hannigan.

‘Love and Be Brave’ is the title of his second album to be released in the spring of 2023. When he started writing this album, Paddy lived alone on his father’s small farm in County Limerick. It was a long way from anywhere and afforded him plenty of time to think, write and play with everything on full volume. It was both cathartic and challenging. By the time he had finished the last song that would go on the album, Paddy was lucky enough to get engaged and move back to Cork. His forthcoming album is a collection of songs that discuss what it means to fall in love, loneliness and the search for hope.