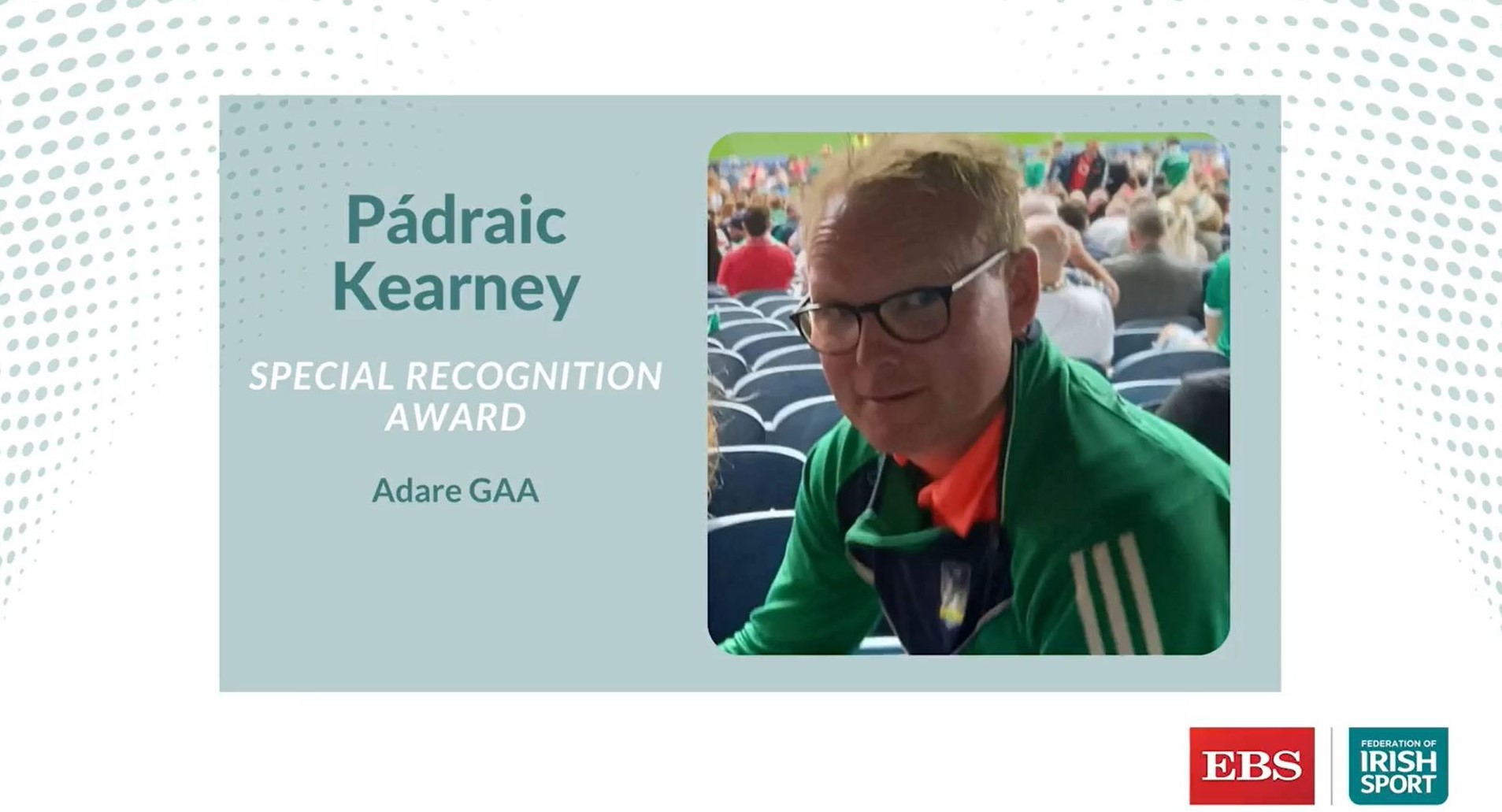 Padric Kearney honoured with award in recognition for his commitment to Gaelic Games in his beloved Adare GAA Club.

The late Padraic Kearney has been honoured with an award by the Federation of Irish Sport in recognition of his commitment to the Gaelic Games in Adare GAA Club.

He was awarded a Special Recognition Award at the annual Federation of Irish Sport Volunteers in Sport Awards which was live-streamed last week.

The 47-year-old father of four collapsed suddenly and passed away while walking away from Croke Park following Limerick’s All Ireland SHC final victory in August this year.

Padraic lived and breathed the game of hurling all his life, and was a selector with the Adare senior hurlers. He loved his club, Adare GAA, and would regularly go to trainings and games in the village.

The Special Recognition Award summary outlines why Padric Kearney honoured with award, stating that he, “was incredibly committed to his community, with his volunteerism going far beyond sport. His untimely passing earlier this year has been felt by everyone in the club, especially the younger members, who Padraic coached for many years.”

⏱ Only a few hours to go! Tonight at 7.00pm we'll be announcing the county winners from Connacht & Munster and the Special Recognition Award for the 2021 Volunteers in Sport Awards, in partnership with EBS.https://t.co/7jnDKrPMkA pic.twitter.com/0enip2y3lP

The Volunteers in Sport Awards celebrate the contributions of the volunteers around the country who give their time to Irish sport and physical activity every year.

Their works adds to up approximately 37.3m hours of volunteering across Ireland’s 13,000 registered sports clubs and associations and, according to Sport Ireland’s 2021 ‘Researching the Value of Sport in Ireland’ report, is worth an estimated €1.5bm to the exchequer.

Members of the public, sports clubs, and governing bodies were invited to nominate an individual throughout September and October whose contribution to sport and physical activity in Ireland has made a real difference to their community, club, or county.

The nominations and award recipients were selected by a judging panel consisting of 12 individuals from the volunteer community, sports administration, and media. Included on the judging panel were former Director-General of the GAA Paraic Duffy, RTÉ broadcaster Marie Crowe and CEO of Gaisce Yvonne McKenna.

The awards are supported by EBS and were streamed live on the Federation of Irish Sport’s Facebook page.

For more information about the Volunteers in Sports Awards go HERE

Related Topics:padraic kearney
Up Next