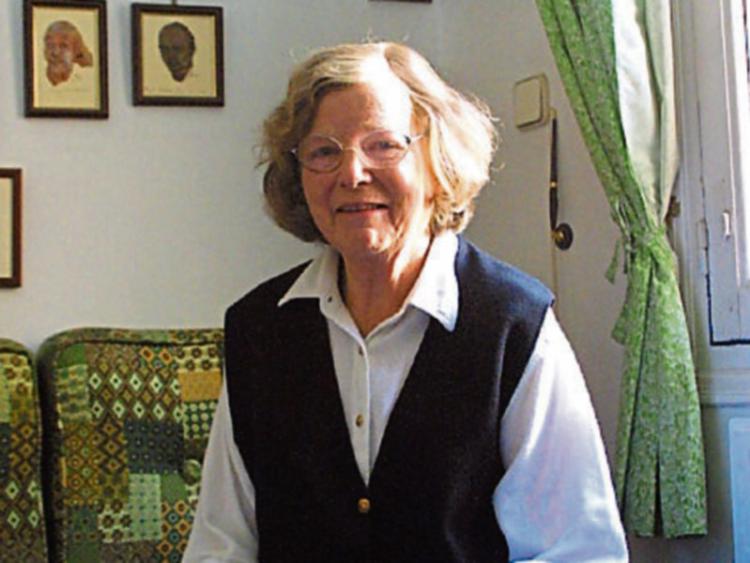 Limerick woman Pamela O’Malley, who sadly died in 2006, is to be honoured by Madrid Council for her activist work by naming a thoroughfare ‘Calle Pamela O’Malley’.

Beloved Limerick activist Pamela O’Malley has had a street named after her in the Spanish capital of Madrid. The Madrid Council has decided to commemorate the Limerick woman who sadly passed away in 2006 by naming a thoroughfare Calle Pamela O’Malley. Remembered as both a marvellous raconteur and important activist, Pamela has become the second local woman from Limerick to receive this honour in the Iberian Peninsula, alongside poet Kate O’Brien. A celebration event is being planned by her friends and family on her birthday, July 12.

“Anybody who has visited Pamela in Madrid knows full well how she would walk them off their feet, visiting museums and theatres, attending parties and festivals,” said Limerick poet John Liddy. “Her own soirees were always such good fun, with Pepi’s variadas soaking up the wine and the banter going on until the early hours.”

“Pamela packed many lives into one and lived each with such intensity,” he said, adding “My heart would go out to her when she would flop on my couch, exhausted from union work and a thousand other things that she was involved in.”

Known for living a full life and being seen as a troublemaker, Pamela lived with her lover Gainor Crist, at a time when cohabitation outside wedlock was frowned upon. The couple moving to Barcelona in 1954, where they got married in Gibraltar and made their final home in Madrid. Pamela never married after her husband sadly passed away in 1964 but did become a respected teacher at the British School. Even though many of her pupils were the children of prominent Francoists, she became attracted to the opposition and was soon a significant figure in the illegal Communist Party of Spain.

She joined the party as it was the only effective underground opposition to the Spanish dictator, Francisco Franco.  Pamela was concerned with a repeat of the Spanish civil war, and promoted strategies of “national reconciliation” that tried to promote democracy without violence. She independent mindset led her to conflict with the party several times, as she was expelled from the party twice, but then twice accepted invitations to rejoin. Her last party affiliation was with the now defunct Democratic Party of the New Left. A founding member of the communist-backed Workers Commission, Pamela was charged with distribution of communist propaganda and sentenced to six months in jail.

Later in her life, she spent much of her retirement working tirelessly for a Spanish peace group, the Asamblea de Cooperación por la Paz, of which she was president at the time of her death. She was granted a doctorate for a thesis on education in the Franco period and edited a book on education reform.

The Spanish labour ministry recognised her work with a gold medal, and the ministry of education awarded her the Alfonso X el Sabio prize. Now in 2019, her name will be immortalised by the Spanish thoroughfare named after her.