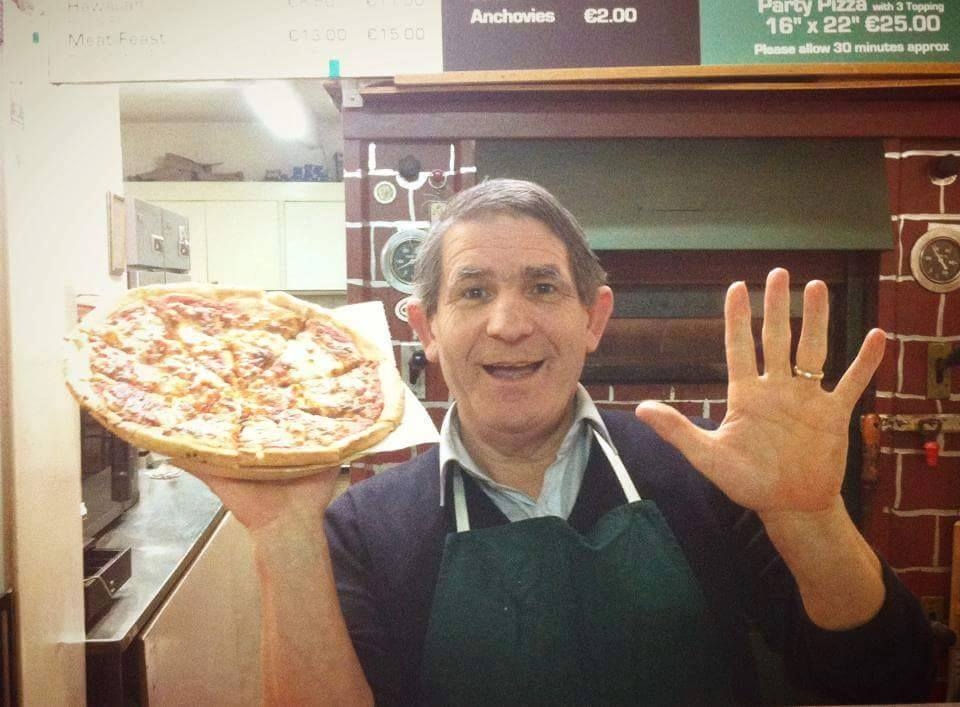 After 35 years serving Limerick’s original and most beloved pizza, Papa Gino has closed the doors of his Denmark Street restaurant for the last time.

Gino first set up shop on O’Connell Street in the mid-eighties, selling fish and chips from his takeaway, ‘Arrivederci’. With new chippers opening every day, Gino decided to do something more unique.

“My wife said, ‘Why don’t you sell pizzas? You are good at it’, so we decided to buy a shop around the corner on Denmark Street,” Gino tells I Love Limerick.

Papa, as he is affectionately known to friends and customers, insists that he never really learned how to make a pizza.

“When I was a kid, I used to hang around the kitchen with my grandmother and my mother asking questions, ‘Why did you do that?’ or ‘Why did you put this in?’ and they would explain it to me. When I was eight or nine, I began playing with the dough and making my own pizzas. As you go along, you get better and better,” says Gino.

“I use the very same recipe as my grandmother. Her, my aunts, my mother, they all used the same recipes,” tells Gino.

The businessman went to great lengths to secure exclusive, high-quality produce from suppliers.

“Every restaurant in Limerick was looking for my pepperoni. They turned the town upside down!” Gino laughs.

“Nobody knew my suppliers. I would meet them on the motorway so nobody would see the truck outside my shop. That’s how the secret was kept.”

Papa Gino says “The limerick people made me famous. It’s very easy to be successful if you have loyal friends and customers.”

As strange as it may seem, the most popular item on Papa Gino’s menu was not pizza. Gino’s homemade ‘pepper’, sprinkled across the top of each pizza, is remembered fondly by Limerick people all over the world.

“I used to sell more jars of pepper than pizzas. I would have customers who were emigrating that would buy ten jars of pepper before they left. My grandmother used this pepper to preserve her parma ham. I made a small bit one day, tried it on my own pizza and thought it was lovely,” recalls Gino.

A keen gardener, many of Gino’s delicious ingredients came from his own crops.

“I used to grow basil, peppers and jalapenos for the shop, all the good stuff. Freshness is number one,” he says.

Gino has been in semi-retirement for a little while now, enjoying rounds of golf and growing fruit and vegetables in his glasshouse.

“I love golfing, but that is more of a summertime thing. With the glasshouse, I close the door and I am inside. I have a little stool, and I sit down and work away. I have figs, lemons, mandarins, sweet peppers, chilli peppers, tomatoes, grapes, apples, everything!”

Despite keeping so busy, Papa Gino misses his vocation on Denmark Street.

“It never became a chore. I always enjoyed working there. Even today, I miss going in and meeting all my friends,” he admits.

“I loved chit-chatting with my customers about the game of golf they had, their ups and downs, or the goal they just scored. People coming in and just talking about what they are doing for the day.”

When asked what he credits his success to, Papa Gino is very clear: “The limerick people made me famous. It’s very easy to be successful if you have loyal friends and customers.”