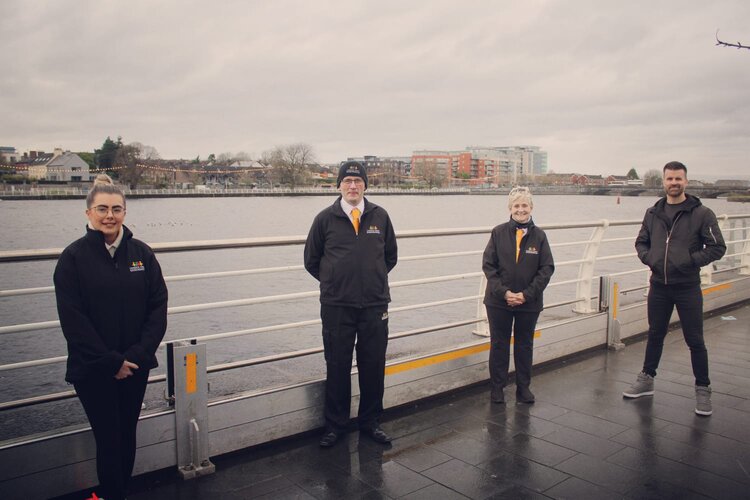 Talented Limerick musicians Paul Fahy and Billy Allen release their new album ‘Songs We Like’ on Saturday, April 10. All proceeds from the album are going to Limerick Treaty Suicide Prevention (LTSP), a very worthy cause. The CD costs €10 and they are hoping to raise €1000 for LTSP.

Billy is a talented musician and music producer. Paul is a 41-year-old professional musician and singer from Limerick and has been performing for over 24 years in various venues all over the country and at times internationally. For the last fifteen years, he has been extremely successful in the pubs and club’s scene in Ireland and continues to wow the crowd today.

I Love Limerick chatted to Paul about the upcoming album.

Could you tell us a bit more about the upcoming album?

The idea for the album came about in early January when the country was placed back in lockdown. I knew at that point it was unlikely that I’d be able to resume gigging until summertime at the earliest. So rather than let the time go to waste, I decided to do some recording work to keep busy.

I got back in touch with Billy Allen, who produced my debut album last summer, and asked him if he’d be interested in recording a short EP of cover songs. The original plan was to just record 4 songs acoustically – similar to MTV Unplugged. But the more we dove into it, the more we found ourselves going back through old songbooks and trying out old favourites of ours.

In the end, what had initially started out as a small 4-song project eventually turned into an album worth of material. The tracklist is quite a mixed bag really – everything from Oasis, R.E.M and Bryan Adams to Paul Simon, Roy Orbison and Tom Petty. There’s even a Whitesnake number in there for anyone who’s a fan of 80’s rock.

I suppose it’s funny in that anyone looking at the back of the CD could be forgiven for thinking we just picked random songs out of a hat, but we didn’t. The songs we picked are personal favourites, that we both would have played down through the years on the gigging circuit. Hence the title “Songs We Like”.

Why did you choose LTSP as the charity to receive the proceeds?

When we initially started recording, neither of us was thinking about how, when or where to release it. We never really had any plans to make it a “commercial release”. Our motivation all along was to just keep ourselves busy during lockdown by doing something we both enjoyed. The furthest we had thought was to just share it with our friends, family and followers on social media as content.

But after finishing it, we figured it could also be a great way to raise funds for a local charity. As everyone knows, the last year has been an extremely tough one. People all over the country have struggled with the burdens of Covid 19. The restrictions have hit all of us in some way, shape or form.

And so, that’s where the idea to release the album on CD and offer all the proceeds to LTSP came from. Given the great work that they do in the local community, and how active they are in helping people to cope with mental health difficulties all year round, we figured they’d be the ideal charity to make good use of the proceeds.

We have both lost a lot of friends and family to suicide from the last couple of years, including a relation of mine that went into the river last January so that kind of spurred me more so towards the suicide prevention crowd and the lads that patrol the river there on a daily basis.

How have you found making music during lockdown?

A breath of fresh air! I think I speak for many people when I say that having an outlet to keep busy is hugely important, particularly while in lockdown. Be it a hobby, pastime, or interest of some sort, I think we all need something to keep ourselves in a positive frame of mind. For me, that came in the form of music and recording. Fingers crossed; we’ll be back to some form of normality later in the year. Here’s hoping!

The continuous lockdowns and restrictions put in place from Covid-19 have seen many people lose their jobs, which in turn has caused a large decrease in the mental health of everyone in Limerick, LTSP decided to expand its life-saving patrols along the River Shannon and extended its services which now operate during the day.  LTSP, commenting on the album on their Facebook said, “We would be delighted if you all could get behind these talented people who are being extremely generous and choosing us as their charity of choice. Mental health is an issue in this country and all funding will help us improve the standards in our city.

Where can people get the album?

The album is scheduled for release on Saturday, April 10. CD’s will be available to purchase from Bishops Quay (behind Henry Street Garda Station next to Shannon Bridge) from 1 pm to 3 pm. All are welcome to stop by and pick up a copy for €10.

CDs purchased through the site are €12 (to cover postage and packaging). Those wishing to purchase the album as a digital download (MP3 format) can also do so via the website for €10.

All proceeds raised from all sales will go to LTSP so please support if you can.

To order the CD visit paulfahymusic.com.

To donate to LTSP go HERE