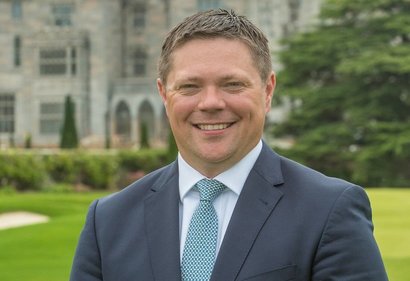 Paul Heery has been appointed the new General Manager of Adare Manor.

Paul Heery Appointed in New Role as Castle and Golf Resort enters the final stage of restoration to be one of the Top Castle Hotels in Ireland.

Adare Manor, one of Ireland’s most renowned Resort hotels has this week appointed celebrated hospitality professional Paul Heery as General Manager. The announcement comes as the 5-Star Resort enters its final refurbishment and construction phase.  The Resort is on schedule to open in Q4 2017.

With over 20 years of luxury hospitality industry experience around the world, Paul Heery from Dublin, will join the management team at Adare Manor from most recently The Gleneagles Hotel in Scotland, where he was General Manager (2014-2017).  Paul was responsible for all hotel operations on the private Perthshire estate employing around 500 people. Prior to this, Paul was Hotel Operations Manager at The Connaught Hotel in London (2012-2014) and Deputy General Manager at The Merrion Hotel in Dublin (2004-2011).

Paul’s extensive career began in the mid-nineties when he secured a place on a three-year Industrial Trainee Management Development Programme at the five-star Sheen Falls Lodge in Kenmare, County Kerry.  Paul has also held senior managerial positions in luxury hotels across the world, including Montreux Palace (Montreux, Switzerland) and The Ritz-Carlton (San Francisco, New York, and Georgetown).

Speaking today, Adare Manor Chief Executive Officer, Colm Hannon, said:“The appointment of Paul Heery as General Manager is part of Adare Manor’s ongoing commitment to provide guests with unrivalled services and facilities, and has come at a very exciting time for Adare Manor as we embark on the final phase of restoration and refurbishment.  Paul’s experience in the luxury travel industry both globally and at other iconic properties, will be extremely valuable as we move onto the new chapter at Adare Manor. We are very excited to welcome Paul into his position”.

Joining Adare Manor, Paul Heery, said: “I am delighted and honoured to be taking over as General Manager of such an iconic and celebrated property. For me, Adare Manor has always stood out as one of the greatest Castle properties, both in terms of its architecture and rich history, and also its stunning grounds, excellent golf course and dramatic beauty.  With the recent extensive renovations nearly completed, I look forward to joining the team and leading the wonderful opportunity of further elevating the guest experience and creating lasting memories for guests at Adare Manor”.

Paul is a passionate golfer and became familiar with the award-winning facilities at Gleneagles in his spare time and will be an additional asset to the golf course at Adare Manor.

Adare Manor closed its doors in January 2016 for an almost two year intermission and will debut its new look in late Autumn 2017. Most notably, the expansion will include a new 42-bedroom wing, an expansive ballroom with capacity for 350 guests, a La Mer spa and a complete revamp of the golf clubhouse and comprehensive redesign of the golf course by world-renowned designer Tom Fazio, which when complete will take its place among the finest golf courses in Europe.

For more on the refurbishment of Adare Manor click here

New M20 Report Illustrates Game-Changing Impact it Would Have