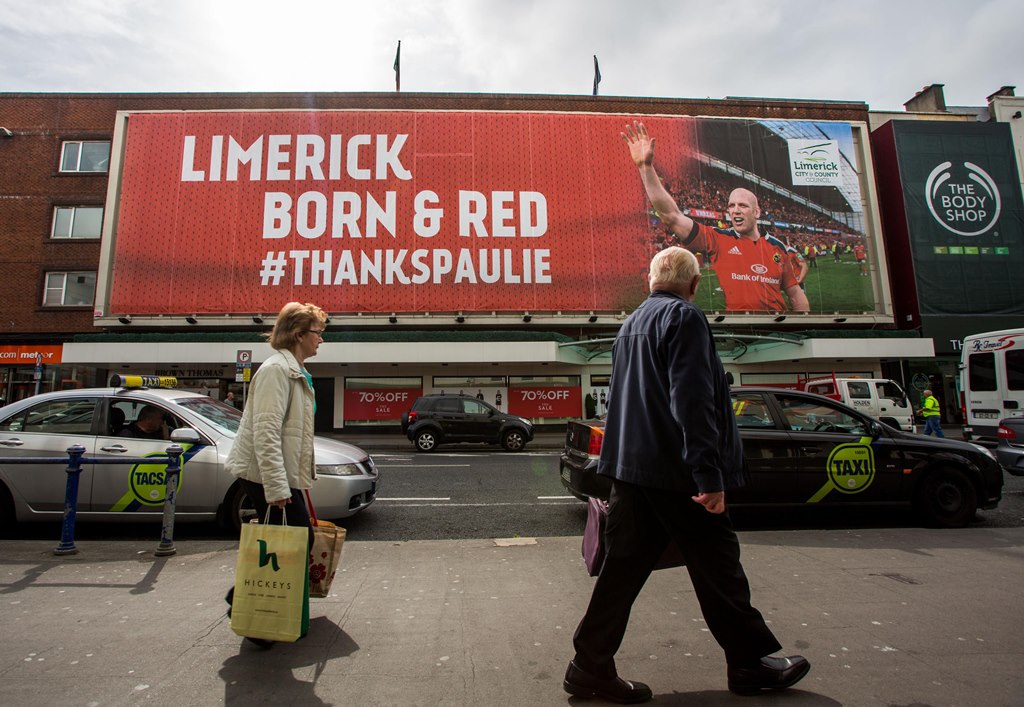 If you were in any doubt as to the impact Paul O’Connell has had for both Munster and his home city, Limerick City and County Council have answered it. The Limerick Council erected a Paul O Connell giant poster in the middle of the city, emblazoned with a #ThanksPaulie hashtag, and the phrase ‘Limerick Born and Red’, as the Munster legend prepares to complete his move to Toulon after the World Cup.

The poster, spanning the width of Brown Thomas, right in the heart in the city centre, was put up overnight and is sure to tug at the heartstrings of any Munster fan walking down the appropriately named O’Connell Street (Daniel, not Paul. Although I’m sure something could be arranged).

174 games, three league titles, two Heineken Cups and a whole career of amazing memories.
Paul O’Connell will next line out in club action for Toulon, not Munster, after the World Cup and many Irish fans are just about coming to terms with it.

The Ireland captain will move to the south of France to join up with the current European champions but has already admitted it was not an easy decision to leave his home province.

Richard paid tribute to O’Connell earlier in the year following the announcement of his retirement he said: “On behalf of myself and I Love Limerick I would like to pay tribute to the retiring Munster and International rugby legend who I have worked with on a number of occasions since the beginning of I Love Limerick. Paul is a man who is truly proud of our beautiful city as he has said himself on numerous occasions and proved undoubtedly over the years through his involvement with positive campaigns and charity work.”

In April 2012 Paul was made a Freeman of Limerick which is the highest honour that can be bestowed upon an individual from Limerick City and County Council. On receiving the award Paul explained that this award was something he will treasure for the rest of his life; “it is truly an honour for me to receive this award from my native city.”

Paul has also expressed his love for his home city through many different projects he has campaigned for over the years. Richard added: “I have been lucky enough to work with Paul throughout projects such as the Special Olympics which took place in Limerick in 2010 and again in 2014. Paul actively campaigned for volunteers to get involved and part of the success of the event is certainly down to his involvement and the spirit he brought to the event, endearing more and more people to get involved.”

More recently, Paul has also put extraordinary time and effort into campaigning for Team Limerick Clean-Up which was an event sponsored by the JP McManus Benevolent Fund on Good Friday of this year.

Richard said: “Paul launched the event back in September 2014 where I had the privilege of working with him again for such a fantastic and positive cause. This man couldn’t be prouder of Limerick and Limerick truly couldn’t be prouder of him, up to 10,000 people showed up on Good Friday to clean up their city and local areas which is no doubt down to the encouragement they received from one of the countries favourite sports stars. Speaking at the launch I remember talking to Paul for a documentary for I Love Limerick and he really cared not only about the clean-up  but also about the future of Limerick, he said: “we need to get as many people out onto the city as we can to clean it up and tidy it up for the series of events that happen every summer in the city. Teaching kids how to look after the city and the county and to be proud of it and setting those standards which hopefully they will carry throughout their lives”.

Not only has Paul O’Connell been an ambassador for multiple charities throughout Limerick over the years, but his sporting achievements are simply second to none making him someone we hold in very high prestige here at I Love Limerick and of course throughout the entire county and country.”