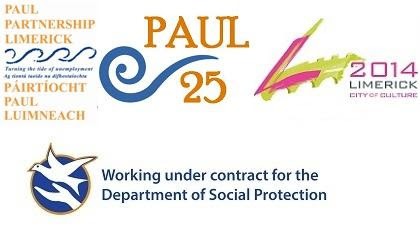 A large gathering of people from communities across Limerick came together with people from statutory and voluntary agencies to acknowledge 25 years of service in Limerick by PAUL Partnership. City and County Manager Conn Murray recalled his long association with PAUL and praised the huge investment of time and resources by the Partnership in the communities of Limerick during the 25 years. ‘Paul Partnership has blazed a trail and played an incredible part in bringing together the drive and enthusiasm of communities’ he said, listing the wide range of programmes on which the Local Authority and PAUL have worked together, from the Seniors Forum to the Lifelong Learning Festival and many more. Referring to the alignment of Local Development Companies as part of the local government reforms, which have seen the merging of Limerick City and County Councils in one local authority, the Manager concluded his speech by saying that it is his belief that the vast experience of the 3 Partnerships in Limerick in working with statutory and other bodies will continue to deliver positive results.

The continued need for local partnership companies was emphasised by Paddy Flannery, Manager of Moyross Community Enterprise Centre who spoke on behalf of community partners. Paddy said the central role of PAUL Partnership was that it brought the community voice to the table where they could share that voice and then were empowered to find and deliver solutions. He went on to stress how important it is for communities and agencies to recognise that Partnerships are needed now more that ever. This role played by PAUL Partnership was also emphasised by Mary Hamilton, Adult Education Officer with the former Limerick City VEC and now with Limerick & Clare Education & Training Board. Mary said the PAUL’s pivotal achievement was to bring agencies and communities together, to bring strength and clarity to individual roles which resulted in adding value to each of these roles.

The attendance enjoyed a visual display of photographs and a video which took them through the various programmes, events and achievements of PAUL Partnership during its 25 years. The Chairperson of the Board of PAUL Partnership, Ger Crowley, paid tribute to his predecessors and to former and current Board members and staff for dedicated service in meeting the many challenges they faced throughout the years. The strengthening of local authorities and the alignment of community development in these new structures will bring new challenges, he said, adding that the strong connections of PAUL Partnership with local communities and the experience of working collaboratively with the Local Authority, state agencies and social partners will continue to result in efficient and effective services that deliver value for money.