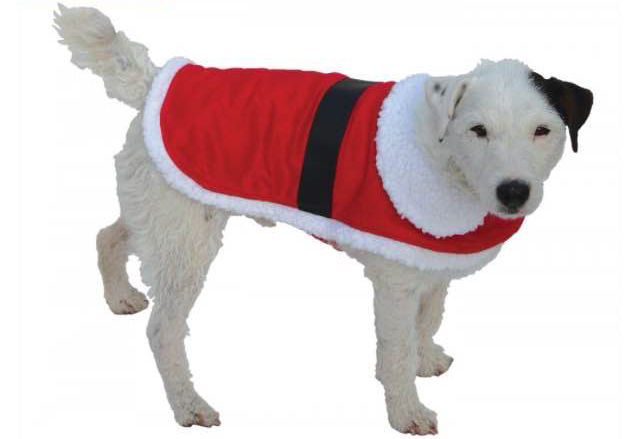 Pictured: The doggy Santa coat, priced between €11.99 – €17.99, will be delivered to the donor’s animal charity/welfare group of their choice.

A Paw Pals Christmas stocking – doggy stocking – priced at €8.95. Stockings will be delivered to the donor’s animal charity/welfare group of their choice.

This Christmas, web store, Paw Pals are providing animal lovers nationwide with the opportunity to donate pet hampers to animal welfare groups and animal charities, at a reduced price. Animal charity supporters can go online to Paw Pals website where they may choose from a number of hampers which start at just eight euro.

The donor will be also be given the opportunity to donate to whichever charity they feel is most deserving. Inside each hamper are treats, toys and essentials which charities and welfare groups need.  The hampers will be personally delivered by Paw Pals management to each charity before December 25.

The hampers can be donated for cats, dogs, hamsters, rabbits, and guinea-pigs. Paw pals will then deliver the hampers to the various Charity and welfare groups just in time for Christmas.

The management team will also send a complimentary Christmas card to all donors which will be signed by Paw Pals staff and will include a message of gratitude on behalf of the charity of their choice.  According to Managing Director of Paw Pals, Darragh Bourke, this drive is all about giving back.

“These welfare groups and charities do some wonderful work, but no doubt they are under strain, particularly when it comes up to Christmas. I will be using this as a Christmas gift for a few of my animal loving friends. I will donate the hamper for them and they will get the Christmas card, acknowledging that they donated.”

The Charity Drive is open to all rescue groups and welfare centres that have a registered charity number. As an additional bonus, Paw Pals will visit each participating sanctuary in early 2016 and will feature each animal welfare group in Paw Pals online magazine.

The motivation to establish such an initiative came from Darragh’s love for animals. When asked, Darragh explained how it was his love for animals that made him immediately provide full backing for the initiative, “I have been involved from a very early age with animals and in particular animal related charities, and I have loved animals for as long as I can remember.

I have always wanted the opportunity to give back to the animal community and now we have this platform and I couldn’t be happier or more proud to be involved with such a fantastic initiative.”

Following on from a successful Christmas sales period in 2014, Paw Pals is once again offering its customers a selection of Deluxe Christmas gift hampers for all household pets, including horses. Paw pals is not only providing their customers with a wide variety of products to choose from, they are providing goods and services at 20% below the RRP.

The hampers include a selection of treats, toys and accessories and are of the highest quality and sourced from reputable Irish suppliers. Available on Paw Pals site are also doggy mince pies. With over 1200 enquiries to date, Paw Pals hampers are proving to be a popular Christmas gift for pets throughout Ireland.