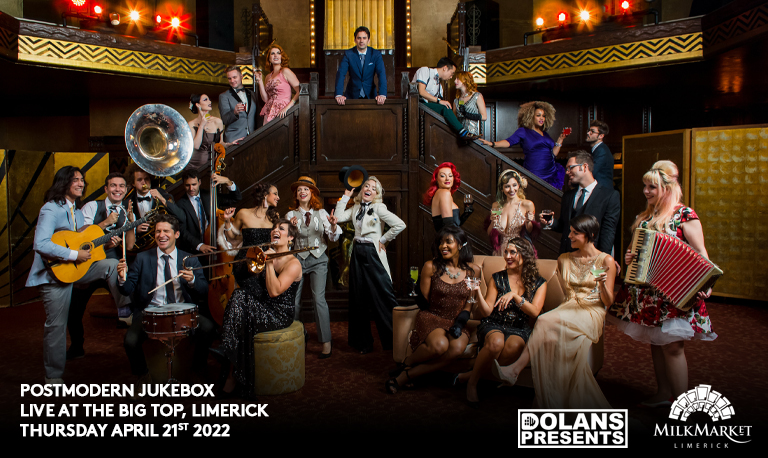 Postmodern Jukebox started out as the bedroom project of jazz pianist Scott Bradlee and rapidly grew into a viral and real-world sensation.

US pop-jazz phenomenon Postmodern Jukebox are set to play Live at the Big Top at Limerick’s Milk Market on Thursday, April 21, 2022.

Dolans Presents have announced that US pop-jazz phenomenon Postmodern Jukebox will play Live at the Big Top at Limerick’s Milk Market on Thursday, April 21 2022.

The Limerick gig is part of the group’s Grand Reopening Tour which will see the group’s long-awaited return to live performance and will be a celebration of the new Roaring 20s travelling across the U.S., Canada, U.K. and Europe

Postmodern Jukebox started out as the bedroom project of jazz pianist Scott Bradlee and rapidly grew into a viral and real-world sensation. The US group’s vintage-pop mash ups have racked up over 811 million YouTube views and brought their rotating roster of top-class session musicians into the limelight and onto sold-out worldwide tours.

Bradlee’s choice of material ranges from the ‘80s hard rock of Guns N’ Roses to hits as recent as Taylor Swift’s “Look What You Made Me Do.” They’re rendered by a rotating cast of musicians and singers in fashions that date back to a time when Axl, Slash and T-Swift’s parents had yet to be born – a time of street corner harmonies and torch singers, blues belters and golden-voiced crooners.

Postmodern Jukebox have earned a reputation for dazzling live shows and The Grand Reopening Tour will feature an ensemble of multi-talented singers and musicians bringing Bradlee’s generation-spanning arrangements alive night after night.

Speaking at today’s announcement, Neil Dolan of Dolans Presents said: “We are so excited to welcome Postmodern Jukebox to Limerick. Every concert they do is both unique and unpredictable. The performers and set lists are never the same but the experience always is – a refreshingly educational, absolutely irresistible, and most important of all, genuinely entertaining show that is not to be missed”.

“Since embarking on a touring career in 2014, Postmodern Jukebox has performed on bigger and bigger stages as they’ve travelled the globe and have performed memorable shows at Radio City Music Hall in New York City. We are looking forward to presenting what is sure to be one of the most thrilling live music experiences seen in Limerick for some time”, he added.

Over the past decade, Postmodern Jukebox has grown from a viral phenomenon into a worldwide juggernaut, amassing more than five million subscribers on their YouTube channel, growing from Bradlee’s tiny apartment in Astoria, Queens, to a Los Angeles studio befitting the bandleader’s increasingly ambitious vision.

Speaking in advance of the Postmodern Jukebox tour, band leader Scott Bradlee said: “I’m grateful to be able to create and collaborate with so many talented people, and playing live to a theater full of music fans is something that we’ve all really missed,” says Bradlee. “We’re fortunate to have so many incredible fans worldwide that have enabled PMJ to become a global touring act, and we’re looking forward to bringing outstanding talent and classic sounds to every corner of the globe once more. It’s a Grand Reopening, but it’s also a Grand Reunion – not just for our talented cast and crew, but also for PMJ and fans of classic, ‘Old School’ entertainment.”

One part celebration of vintage music and culture, one part “’Saturday Night Live’ for singers”, a Postmodern Jukebox show is an unforgettable trip back in time that makes Pop Music History. Don’t miss it when it hits Limerick city in April 2022.

Tickets for Postmodern Jukebox Live at the Big Top at Limerick’s Milk Market are on sale now. Tickets can be book via the Dolans website or by calling the Dolans ticket hotline on 061 314483

For other stories on Dolans go HERE