A new book marking the Centenary of the Limerick Soviet of 1919 was presented on Monday to President Michael D Higgins at Áras an Uachtaráin.

Mike McNamara, President of Limerick Council of Trade Unions, and other Council officers, together with Liam Cahill, author of ‘Forgotten Revolution [The Centenary Edition] The Limerick Soviet 1919’ made the presentation during an hour-long meeting at the Áras.

Speaking after the presentation, the author said the book goes beyond the story of the Limerick Soviet and contains intriguing new information from the Military Archives in Dublin, that shows events and developments in the vital year of 1919 in a new light. 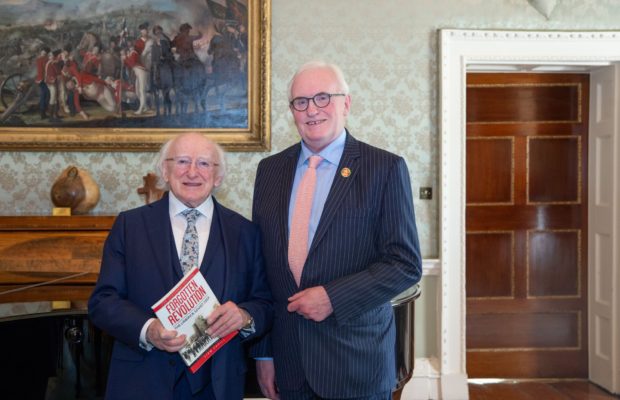 To mark the Centenary of the Limerick Soviet of April 1919, President Higgins received Liam Cahill (right), author of ‘Forgotten Revolution, The Limerick Soviet 1919’, a new book on the role of workers in the War of Independence, at Áras an Uachtaráin. Picture: Barry Cronin [email protected]

Recalling recent comments by President Higgins at a history seminar in University College Cork, Liam Cahill said “A highlight of the Decade of Centenaries has been the recovery and honouring of the role of women in the fight for our freedom. However, in the remaining years of the Decade, it is imperative that historians and researchers actively redress the similar neglect of Labour’s role. Otherwise, the rest of the Decade is in danger of becoming a monotonous parade of ambushes, assassinations and raids with the significant role of workers and their trade unions continuing to be airbrushed out of our history.”

Priced at €15, including a map, Chronology of Events and many photographs never published before, ‘Forgotten Revolution’ is on sale in the Celtic Book Shop, Rutland Street and O’Mahony’s Booksellers, O’Connell Street, Limerick. It is also available online as a paperback or e-book from Amazon and other leading Internet bookstores.

Historian Liam Cahill has been studying the Limerick Soviet for years and recently started a new Facebook and Twitter page that describes the day-to-day events of the Limerick Soviet that existed during the Anglo-Irish War. The social media pages aim to raise awareness to the historical event on the year of its centenary, by describing it in a step by step, easily accessible format.

A privilege and a pleasure to be in the Áras today with Mike McNamara, President of Limerick Council of Trade Unions to present President Higgins with a copy of ‘Forgotten Revolution [The Centenary Edition] The Limerick Soviet 1919’. https://t.co/1KCHRy808l

The Limerick Soviet was a self-declared Irish soviet that existed from 15 to 27 April 1919 in Limerick. At the beginning of the Irish War of Independence, a general strike was organised by the Limerick Trades and Labour Council, to protest the British army‘s declaration of a ‘Special Military Area’ under the Defence against the Realm Act, which covered most of Limerick city and a part of the county. The general strike was extended to a boycott of the troops and a special strike committee was set up to print their own money, control food prices and publish newspapers. The businesses of the city accepted the strike currency, but outside Limerick, there was little sympathy for the Soviet, particularly in the main Irish industrial area around Belfast.  Ultimately, the Soviet could not last forever and eventually was declared over by its participants.

For more information on the Limerick Soviet, click here