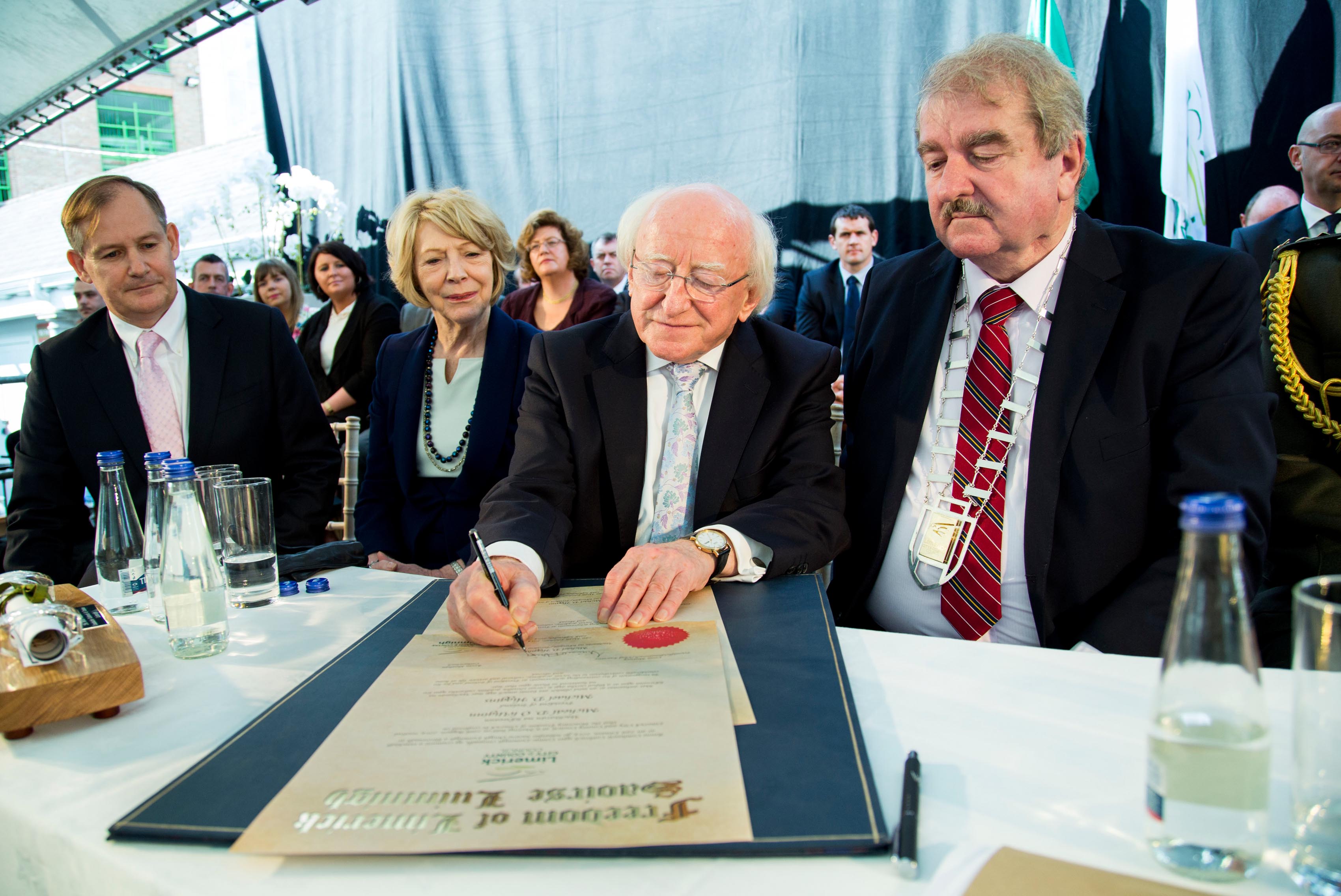 President of Ireland, Michael D Higgins has become the first recipient of the honour of Freedom of Limerick following a ceremony in Limerick city this afternoon (Monday).

President Higgins received the honour in front of almost 1000 members of the public in Limerick’s open air Milk Market.

”We are privileged to bestow on you the Freedom of Limerick, the highest honour that Limerick City and County Council can bestow on any one individual, group or organisation,” Cllr Sheahan said.

“Today you become the first person to be conferred with the Freedom of Limerick under the newly merged local authority.  It is fitting that you receive this honour during Limerick National City of Culture 2014 of which you are patron. Here in Limerick we are proud to call you one of our own. Your deep affection and in depth knowledge of Irish arts and culture is well known at home and abroad and therefore it is only fitting that your native city and county honours your contribution.”

Accepting what he termed ‘a very special honour’, President Higgins recalled living in Limerick city during his childhood years.

“My brother John and one of my sisters, Kathleen, are here today with their families and it means a great deal to me that we can share this happy occasion in our city of origin, a city my parents loved,” President Higgins said.  “In my poetry collection there is often many, many references to Limerick.  I accept this honour today with great pleasure and humility, given as it is on behalf of all those who live in Limerick, and those who love and shout for Limerick whatever their circumstances, wherever they may be, and whatever the challenges they face in the city and county of their minds and hearts.

The President added: “It was an honour to become sole patron of Limerick City of Culture. I have been impressed and delighted by the wonderful success you’ve had already including of course the recently triumphant arrival of Royal De Luxe and their Giant Saga.  As Ireland’s first National City of Culture you have led the way and set a very high standard for other cities to follow. “

The ceremony was followed by a musical performance from Micheál Ó’Súilleabháin, Founding Director of the Irish World Academy of Music and Dance and Chair of Music at the University of Limerick.  He was accompanied by guests saxaphonist, Kenneth Edge; TG4 Young Traditional Musician of the Year, Padraic Keane, and the Carolan String Quartet – Karen Dervan, Lynda O’Connor, Denis Doyle and Kate Ellis.

The President also met with the Board and staff of Limerick City of Culture and representatives from some of the ‘Made in Limerick’ legacy projects.

The title of Honorary Freeman of Limerick is new and President Higgins is the first recipient of this honour following the formal establishment of Limerick City and County Council on 1st June, 2014.

Freedom of the City or Freedom of any given municipality is an honour dating back to ancient Empire which regarded the “pomerium”, the boundary of the city, as sacred.

The honour, sometimes called the Freedom of Entry, was granted by municipal authorities to military units which had earned the city’s trust. It allowed them the freedom to parade through the city, and was an affirmation of the bond between the units and the citizenry.

The honour also has its roots in medieval times, arising from the practice of granting respected citizens freedom from serfdom.  During the 18th and 19th centuries, the honour was essential to anyone who wished to trade or exercise their craft within any given City’s boundaries.

In later years, the honour has more commonly been bestowed by a municipality upon a valued member of the community, or upon a visiting celebrity or dignitary. Meanwhile, the right to award Freedoms was extended to all local authorities in 2001.

It remains one of the oldest surviving traditional ceremonies still in existence throughout the world today, particularly in the Republic of Ireland, United Kingdom (UK), Australia, Canada and New Zealand.

Photos by Oisin McHugh for ILoveLimerick.com 2014. All Rights Reserved