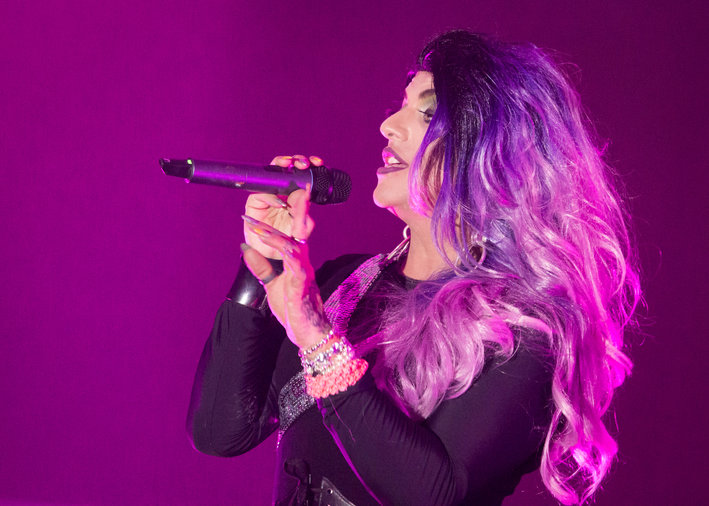 Pictured: Shyanne O’Shea who will be the host of PrideFest 2017. Photo: Film Free Music Photography.

Limerick born and London-based drag artist Shyanne O’Shea (Garrii Bailey) has been announced as the host of PrideFest 2017 which takes place after the Limerick LGBTQ Pride Parade 2017!

The annual Limerick LGBTQ Pride Parade on Saturday, July 15, will bring some extra colour and music to Limerick City Centre, gathering at City Hall at 1.30pm the Parade will make its way at 2.30pm sharp up O’Connell Street, across Mallow Street to Henry Street, past Arthurs Quay Park and returning to City Hall.

Pictured: Shyanne O’Shea who will be the host of PrideFest 2017. Photo: Film Free Music Photography.

Taking place after the Limerick LGBTQ Pride Parade on Saturday, July 15, PrideFest 2017 will be a showcase of local LGBTQ culture in a lavish marquee in the Hunt Museum’s gardens. It will be hosted by Shyanne O’Shea and will have a variety of special guests and performances such as the Unity Gospel Choir Limerick, musical performances, drag performances and much more. Limerick legend, actor, director and playwright Myles Breen will be holding his annual Tea Dance, which for many is a highlight of the festival.

Shyanne will be performing at Pride Festival 2017 Climax Party at Dolans Warehouse the night after Pridefest 2017 so make sure to come along and watch this incredible performer.

In 1999 Shyanne O’Shea was the star of a hugely successful BBC show in which she was filmed performing in bars and clubs throughout Co. Limerick and her hometown of Shannon. This was followed by an additional show produced by RTE television. However in 1999, when Shyanne was on the brink of achieving her goal of stardom, she gave her final charity performance in Co. Limerick.

Since then Shyanne O’Shea has been working hard to get her career on track. Photoshoots released of her have had an amazing response, and Shyanne has been shocked by the speed at which things have been happening – the growth of social media since her incarnation has been phenomenal, and has served to help push her back into the limelight. Shyanne O’Shea is a Producer, DJ, Model, Hairstylist and Makeup Artist so be sure not to miss this incredible drag sensation in action!

To read our interview with Shyanne O’Shea click here

Angelas Ashes The Musical full cast has been announced!