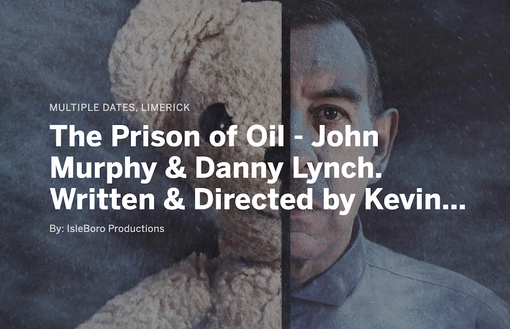 The Prison of Oil – Written and Directed by Kevin Kiely Jnr

The Prison of Oil is a new theatre piece brought to you by Limerick theatre company IsleBoro Productions and written and directed by Kevin Kiely Jnr starring well known Limerick actor John Murphy and 8 year old Limerick actor Danny Lynch. The piece imagines the possibilities if one man is given a blank canvas of power. The Prison of Oil will open Tuesday April 26, 8pm at Limerick City Build Ltd, Bank Place.

IsleBoro productions are an up and coming Limerick based Theatre, Film Production and Event Management Company, set up by Limerick native Kevin Kiely Jnr. You may know Kevin’s name and face from past appearances in the Batman movie The Dark Knight Rises and Marc Forster’s World War Z starring Brad Pitt. Kevin was also in a live performance work from Royal de Luxe, he has also been highly involved in Limerick Film and Theatre, and producing at Dance Limerick. After Kevin won a scholarship to The Guildford School of Acting he was extremely successful and picked up The Sean McNamara Award and the Sir Michael Redgrave Award for production and acting work.

IsleBoro Productions recently just had huge success with their short film The Cheese Box which will be screened at The Short Film Corner at the 69th Cannes Film Festival 2016 this summer. 16 other Irish films including a Limerick made short film, Safe will also screen at the festival. Kiely Jnr’s amazing performance in The Cheese Box will give the audience a moving and powerful account of a Limerick man’s struggle.

IsleBoro Productions produces theatre pieces that are site specific and Prison of Oil is an example of this. The play is set in the studio of an oil painter. The environment of the warehouse in the Limerick City Build which acts as a location for the play, lends itself to the story of this artists war with the world.

The Prison of Oil will run from April 26-30 and May 3-7, all shows will take place at Limerick City Build Ltd. Tickets are only €11.43 and are available from O’Mahonys Booksellers Limerick. This is a performance not to be missed!

You can find The Prison of Oil on Facebook here