Home / Awareness / Purple Up Limerick Rally against violence against women on Friday, November 24

By Richard Lynch on November 26, 2017@richanthon 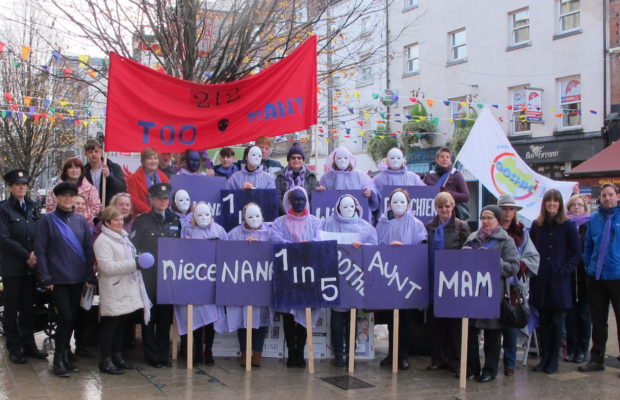 The Purple Up Limerick rally took place in Limerick City Centre to put a spotlight on men who have abused women as part of the International 16 Days of Action Campaign. Picture: Maxine Bramley/ilovelimerick.

Friday, November 24 people in Limerick wore purple and carried purple flags and banners to meet at ‘the junction of Thomas St. and O’Connell St., in the city centre, by kind permission of the Council, for a rally at 12 noon to 2 p.m. with a spotlight on men who abuse 1 in 5 women in Ireland.

212 lights were lit with the name of each of the 212 women who have died violently in Ireland in the last 21 years.

At 12:30 pm the National Moment of Silence was observed in memory of those stolen lives. Many men’s and women’s groups and clubs, from all over the county came to the event.  The Northside Men’s Shed members made placards.  The Men’s Sheds members from around the county attended the event wearing MAN UP t-shirts. Purple balloons decorated the area, purple hats, scarves, coats, and sashes will be worn.

City Hall, Merchants Quay, was lit up in purple on the day.

The Aim of the 2017 ‘Purple-Up Limerick’ campaign is to highlight the prevalence of violence against women in Limerick and stand in solidarity with those who are affected by abuse and violence in their close relationships and by doing so turning the spotlight on abusers and sending a message to them that Limerick will not tolerate abuse of our women and girls.

Shops, schools, Credit Unions, Banks, offices, organisations were asked to dress their windows with purple balloons and crepe paper streamers which were available in Purple Up Packs, and display posters supporting the Campaign.

To read our last story on ADAPT House click here