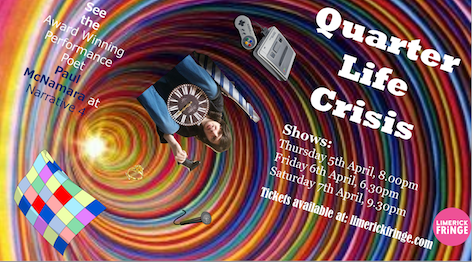 Limerick Fringe 2018 writer and performer Paul McNamara from Doon, Co. Limerick presents his original show ‘Quarter Life Crisis’. Paul will take you through his own quarter-life crisis with his blend of comedic performance poetry and theatre. Come and join Paul for a night of laughter in Narrative 4 on O’Connell Street on April 5th, 6th or 7th.

Watch as he shares his experiences of being in your twenties in Ireland today. With original poems performed ranging in topic from celebrity crushes to real-life relationships to video game obsessions and more.

Paul will take you through his poetry career, recounting stories about gigs and competitions with plenty of self-deprecation thrown in. Follow Paul’s attempts at becoming Munster and All-Ireland Poetry Slam Champion and the weird and wonderful places and people he found along the way.

Experience the heartbreak and triumph of winning and losing in both poetry and life. The show will be a combination of performance poetry and theatre. Its a culmination of the last three years of poetry featuring poems performed at competitions, festivals and on television (including a showing at this years Ireland’s Got Talent) and radio.

Paul is a current student and tutor in Mary Immaculate College. He is a two time All-Ireland Spoken Word Poetry runner-up. He has won the Munster Spoken Word Slam (2016), Limerick’s Got Talent (2015), and the inaugural Yeats’ Tower Slam (2016) sponsored by Poetry Ireland. He is also a former winner of Limerick’s ‘Slamzas’ (2017) and Dublin’s ‘Slam Sunday’ (2017) events.

His first play Searching For Rusty was performed in Limerick in 2016 and he has completed a one-year play-writing course with Olivier Award-winning company Fishamble. His work has been featured on RTE Radio 1, Irish TV and TV3 at festivals such as Independence, and been published in Sextet, Solstice Sounds, and The Stony Thursday. He has edited a collection of audio poetry with Stanzas. He has been commissioned to write work commemorating Richard Harris for the Richard Harris Film Festival (2017) and to commemorate Kate O’Brien for the Limerick Literary Festival (2018). He took part as a writer for 24 Hour Theatre in the Belltable in 2018. He was shortlisted for the Laois County Council Spoken Word Poet in Residence in 2017.

Plan your Summer fun with the new Limerick Festivals Guide