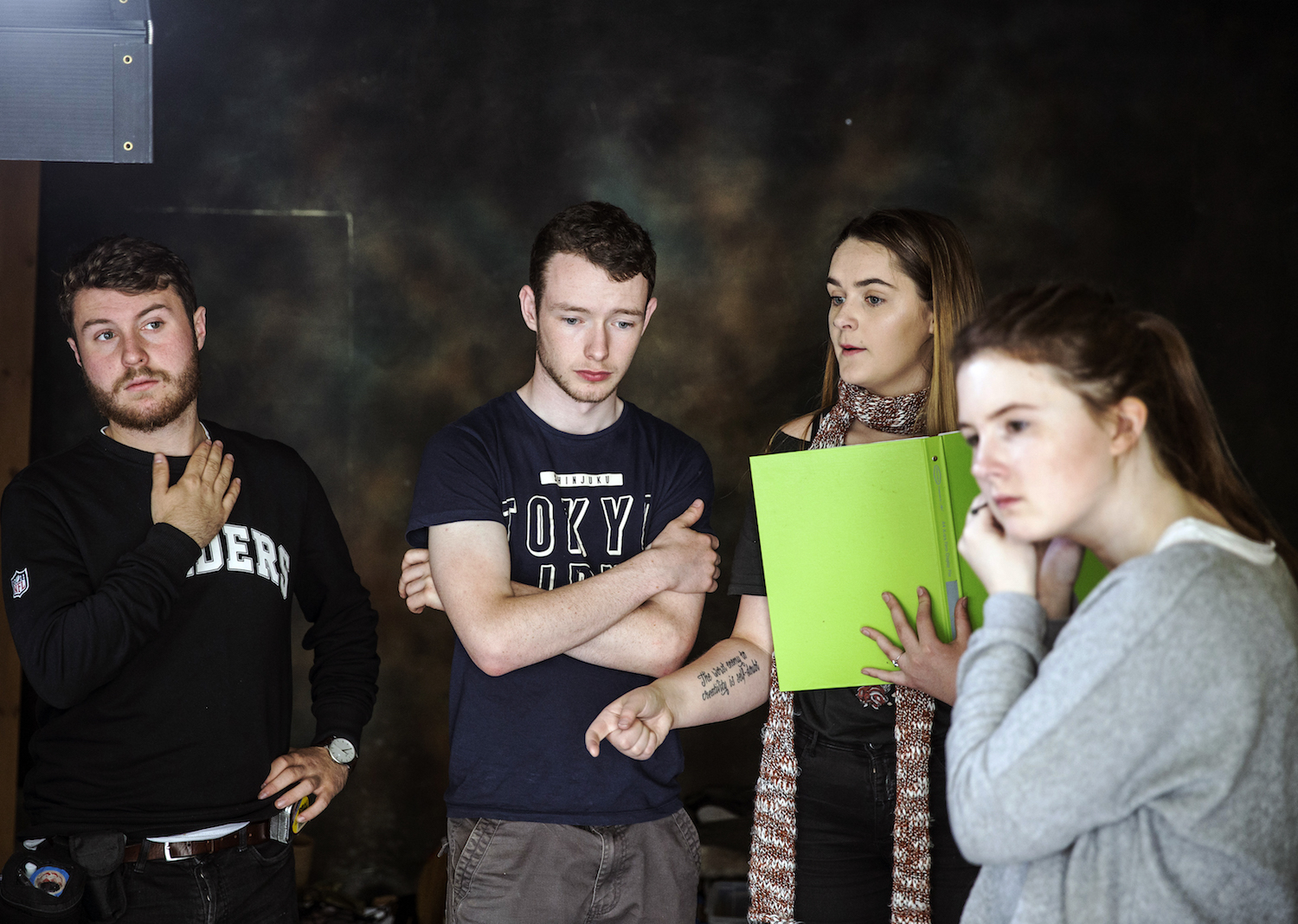 Rachel McGill Limerick filmmaker: Local filmmaker Rachel McGill will be competing in the final of a national talent competition with a cash prize of €10,00. Rachel is pictured here directing during one of her shoots (3rd person from the left).

Rachel McGill, a 21-year old Limerick native and student at the National Film School in Dublin, is set to compete in the finale of the Talent Nation talent showcase in the Twenty Two in Dublin on Wednesday, October 2.

Talent Nation is one of Ireland’s leading talent directory and caters for actors, filmmakers, models, artists, photographers and much more. The competition has been running online for the past eight weeks in association with FM104 and has relied on both public vote and a judging panel.

The competition has been shortlisted to 18 finalists from 9 separate categories and the winner will walk away with €10,000. Rachel is competing in the Film and Tv category, along with Anna Czarska from Kildare.

Rachel said, “I’m so excited to be in the final, winning would mean everything to me. It would give me an opportunity to create a film exactly how I’d like it with complete creative freedom”.

Rachel has an extensive background in film making, with perhaps one of her most impressive accolades being that she is the only women to have ever been crowned ‘Ireland’s Young Filmmaker of the Year’, after winning in 2016 with her film ‘Poppies’, which won awards in the UK, US, and Europe.

Throughout the past few years, she has continued to direct music videos, documentaries, and short films that go on to screen at many film festivals nationally and internationally.

She is currently in her final year in the National Film School in Dun Laoghaire, where she is directing and producing short films and working part-time as a runner in RTÉ studios.

As part of her final year, she has to create a graduate film completely self-funded. She has found this very difficult since losing her mother over the past year after a long illness. Her mother was her greatest inspiration and while she has found it very difficult to make content, she is very determined and is constructively using her grief by basis her graduate film on her own experience.

Rachel said, “The film I want to create is a Fairytale-Esque horror film about a young girl who is pushed to the brink of madness while dealing with grief. The film is set on the west coast of Ireland in 1940s and is inspired by the folklore of the area. The second film is based on the time I spent as a teen caring for my mother in a cancer facility”.

“The film I want to make is a horror film about grief, I recently lost my mam to cancer and so I’ve drawn on my experience to create something to show the terror of losing someone. I found it hard to write anything after she died as I was so used to working with her and getting her opinion on my work but I think this is something she’d be excited for,” she added.

She started developing her talent at age 15 by making her own film which gained national attention and she was chosen as one of 3 Irish students to be flown to China to take part in an international film programme.

In 2016 she took part in a HotHouse project run by the Fresh Film Festival and RTÉ, where she was mentored by Eugene O’Brien, an Irish screenwriter, and playwright.  Through this, she made her short Christmas film ‘Hygge’ which was screened on RTÉ this year.

Rachel has been a part of numerous filmmaking projects, a lot which she has led herself. She hopes to use the prize money from the competition to fund her final year project.

In 2017 she was approached by a local youth theatre to help make a film with them. Through the YES scheme, they were granted funding to make a short film entitled ‘The Ban’. ‘The Ban’ was one of 30 films chosen by the Creative Mind Group to be screened inside the Palais at the Cannes Film Festival 2018. She was then flown to Cannes to take part in masterclasses and internships.

She has been saving but struggling to get the amount she needs to fund her final year projects. The money would be used for costume/ production design, makeup, locations, actors, catering, crew expenses as well as distribution for the film once completed.

She said, “Having the opportunity to create a film with a high budget gives me more creative freedom with my work. I won’t have to work within tight restraints and can release my full potential. Having the money then to distribute the film gives me the opportunity to have my work seen and build my name as a director.

“Winning this would mean I could create the film of my dreams,” she added.