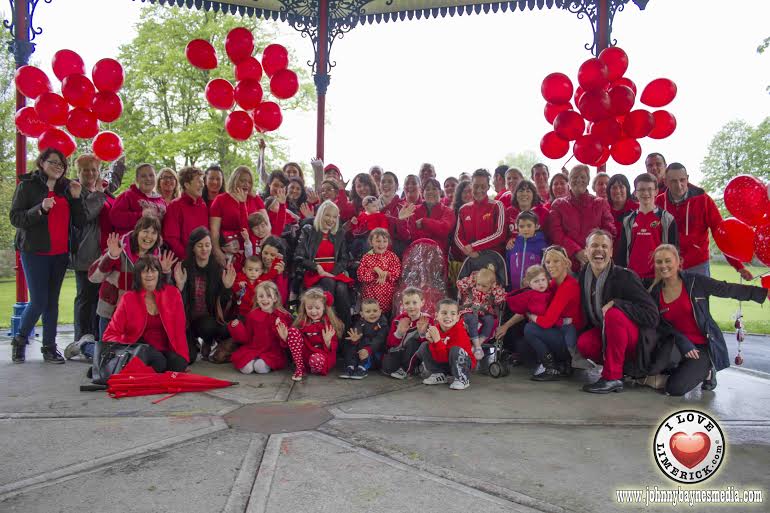 Red balloons filled the sky in the People’s Park on Thursday, when family and friends dressed in red, gathered to pay tribute to Amanda Corbett, and to raise awareness about Ehlers-Danlos Syndrome, (EDS).

Amanda Corbett died from symptoms of EDS in December 2011, at the age of 27, having just been diagnosed with the disorder at 20. The young mother of one suffered with an extreme vascular form of the disease, which became evident after she became ill on a flight to America.

This inherited disorder affects the connective tissues of the body, affecting primarily the skin, joints and blood vessel walls. This rare disorder is so uncommon that the Irish Health System and hospitals are not equipped to treat this disease and its effects, forcing sufferers to seek treatment abroad, and local treatment is not in the foreseeable future for those suffering in Ireland.

As a part of Ehlers-Danlos Syndrome awareness month this May, people were encouraged to post a selfie while wearing something wearing red, with the hashtag Reds4Veds, in support of those with EDS and Vascular EDS.

These events held are not only to raise funds and support for EDS, but also in memory of Amanda, who has been remembered as the Amanda Corbett Memorial Tournament in September of 2014 and at the Great Limerick Run that took place this year.

Among these in red gathered at the event was Zondra Meaney, 30-year-old Limerick local, who was diagnosed with EDS and was childhood friends with Amanda.

Up to €20,000 has been raised for Zondra in just the last 18 months, which provides her means of travel to London, the closest destination for treatment, and pays for specialist care and treatment. There is no cure as of today and any funds raised go towards the management of symptoms and the treatment of secondary conditions that can arise. Funds raised so far have allowed Zondra to travel for treatment five times, with another trip planned for this Summer.

Zondra maintains a positive outlook, voicing her wish to promote awareness about EDS. Acknowledging her friend’s journey with the disorder, she says that the event was about the disorder in general and about awareness: “My main goal is really just about raising awareness, and getting the name of it out there, and letting people know what patients really are faced with.”

Donations can be made through Zondra’s GoFundMe page here, though the support and funds raised have been made through a mainly local level: “Usually we have a lot of fundraisers in the community and we have table quizzes and music nights. Usually we just have a fundraiser before I go to London”.

Photos by Jonathan Baynes for I Love Limerick 2015. All Rights Reserved.