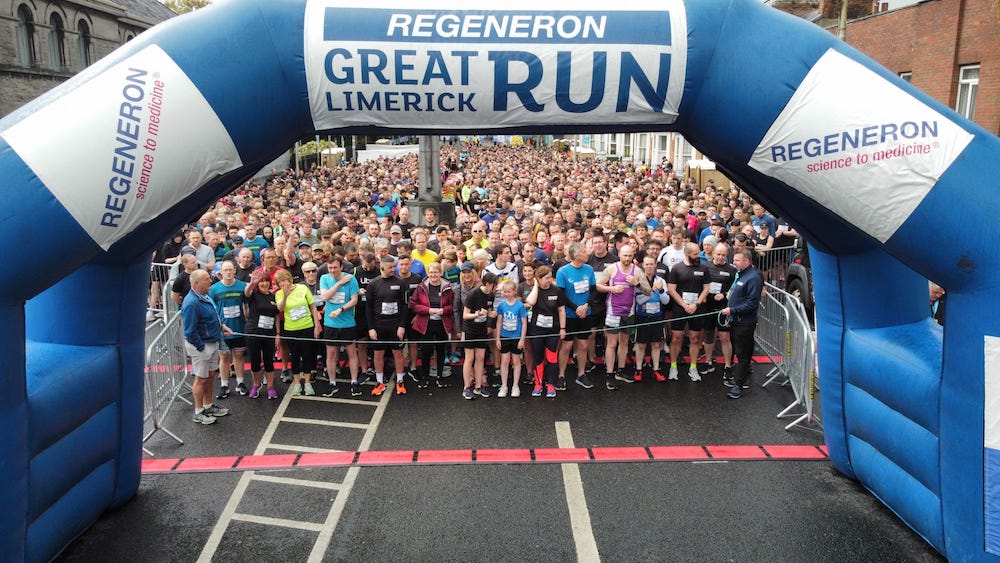 Regeneron Great Limerick Run 2022  –  Pictured above is the start line of the Run. Picture: Kris Luszczki/ilovelimerick

Regeneron Great Limerick Run 2022 back on the streets of Limerick

After three years of having no physical event due to Covid-19, the 2022 Regeneron Great Limerick Run is back.

Up to 15,000 people are expected to register for the Regeneron Great Limerick Run 2022, the largest number of participants ever to take part in the event.

The 2022 version of the single biggest mass participation event outside of Dublin was launched today by Deputy Mayor of the City and County of Limerick Councillor Tom Ruddle, who said that everything suggests the organisers and sponsors are set to take the run to another level across the next decade.

Speaking at the launch at the Limerick Strand Hotel, Deputy Mayor Ruddle said the Regeneron Great Limerick Run has become more than a race as it has brought huge numbers to Limerick from abroad and across the country.

Said Deputy Mayor of the City and County of Limerick Cllr Tom Ruddle:  “The Regeneron Great Limerick Run has been an incredible success story over the years, bringing so many people to the city, raising so much money for charity and, as such, has rang the bell for the start of the summer, not just in Limerick but nationally.

“This year that bell will ring louder and more joyously than ever before. It’s always been a special event, but we can only imagine the excitement on May 1st when runners and walkers take to the line after two years of lock-down. We’re so looking forward to welcoming all those people back into Limerick and for this city to be the launchpad for summers of fun all over again.”

In 2019 participant numbers exceeded 13,000 thousand people for the Six Mile, Half Marathon and Full marathon. Based on the current increased level of early registrations that have taken place from those who have already availed of early bird discounted race entries over the three race distances, the event is on track to surpass last year’s total by almost 2,000 people.

Niall O’Leary, Senior Vice President, Site Head at Regeneron Ireland said, “Whether you are competing to win the gold, running for fitness, or cheering from the sidelines, there is something truly special about how people come together at the Regeneron Great Limerick Run. There’s always a palpable sense of camaraderie, excitement, and energy in the air that we’ve all missed these last three years. We are delighted to help unite people from across Ireland again as only an event like this can do.”

A Social & Economic Impact report commissioned by Limerick City and County Council conducted by W2 Consulting estimated the event will deliver a welcome €4.5 million boost to the local economy over the course of the May bank holiday Riverfest weekend in Limerick city.

Dr. Pat Daly, Chief Executive of Limerick City and County Council said, “Limerick is known as a festive city, but I think this May Bank Holiday weekend, with the Regeneron Great Limerick Run, we’re going to see a level of festivity and fun unleashed unlike anything before for this event. We’ve been waiting for something like this for over two years. It’s the first major mass sporting participation event of the year in Ireland so, effectively, the first in Ireland since COVID-19 began.  So, there’s an opportunity and obligation to make this very special and we intend to make it very much that. We really can’t wait.”

As well as being the largest mass participatory event outside of Dublin, the Regeneron Great Limerick Run is designated as an annual ‘Tier One’ event in the Mid-West region.

Speaking at the launch of the Regeneron Great Limerick Run 2022 event, Race Director, John Cleary welcomed the continued title sponsorship of Regeneron and also confirmed that the Munster Athletics Council has again designated both the Marathon and Half Marathon as its official Munster championship races. This designation, which will entice higher numbers of competitive athletes chasing personal-best race times, is a reflection on the growing status of the Regeneron Great Limerick Run as a premier running event.

“I also wish to acknowledge the huge levels of support from the people of Limerick and beyond who have demonstrated in numbers both participating and watching year on year that the Regeneron Great Limerick Run is now a firm favourite on the Irish sporting calendar,” said Mr Cleary.

“The public private partnership model has allowed us as race organisers to deliver a world class event to Limerick with an economic value estimated now in excess of €4.5 million.  The support and commitment of our title sponsors Regeneron, together with Limerick City and County Council and other commercial and statutory sponsors, reflects the confidence that all stakeholders and partners have in the future growth potential of the event.”

From the inaugural race in 2010, over 83,000 people have crossed the finish line raising €2.7 million for various charities while simultaneously contributing €25.5 million to local and regional business.

For other stories on the Great Limerick Run go HERE