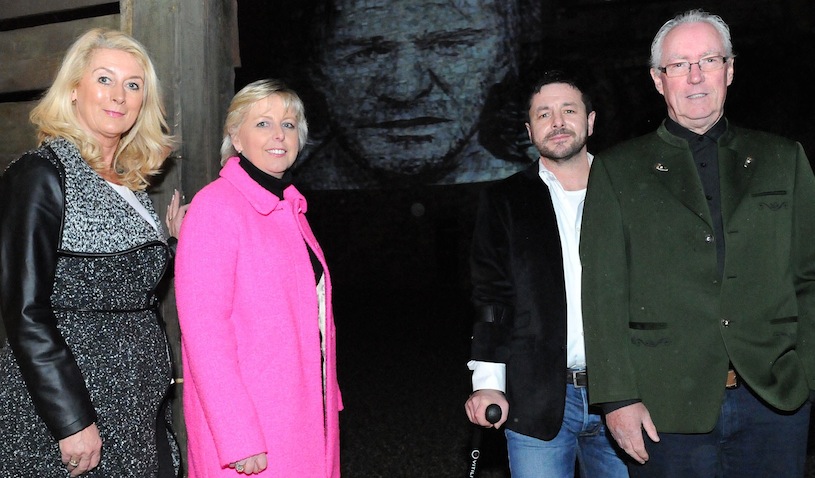 The programme launch of the Richard Harris Film Festival, an official Gathering event, took place last week at King John’s Castle and Rob Gill, festival director, opened the proceedings with an overview of the planned programme of events and shared ambitious plans for 2014 to expand the festival as a lasting and worthy memorial to a true icon of stage and screen. The inaugural festival will take place in December, to celebrate the famed actor’s life and career and his “love of Limerick”. Harris’s three sons Jamie, Damian and Jared – now a star himself with roles in Sherlock Holmes: A Game of Shadows and Mad Men – will attend the opening night of the festival, which will take place from December 6-8 in the arts centre at 69 O’Connell Street. “We will have screenings of new feature films from the Irish film-making Diaspora currently working abroad as well as a retrospective screening and discussion of one of Richard’s most critically acclaimed films,” explained Rob Gill, part of the organising team which also includes Eleanor McSherry and Zeb Moore. The tenth anniversary of Harris’ death was marked in the city last October 25. A highlight of the Festival will be the screening of ‘This Sporting Life’, one of Harris’s most noted and successful films for which he won Best Actor in 1963 at the Cannes Film Festival and an Academy Award nomination. It is coincidentally celebrating its 50th year and will be celebrated in style. Limerick/Munster Rugby star and Harris friend Peter Clohessy will introduce the film and there will be one or two other surprises on the day. There will also be a party in Clohessy’s afterwards which will allow for the viewing of the Leinster rugby match. Other events taking place over the weekend are a showcase of internationally acclaimed and up and coming ‘Limerick Short Filmmakers’, a ‘Young Filmmakers’ short film competition and an exhibition of Harris memorabilia.  Go to www.richardharrisfilmfestival.com for tickets and info.