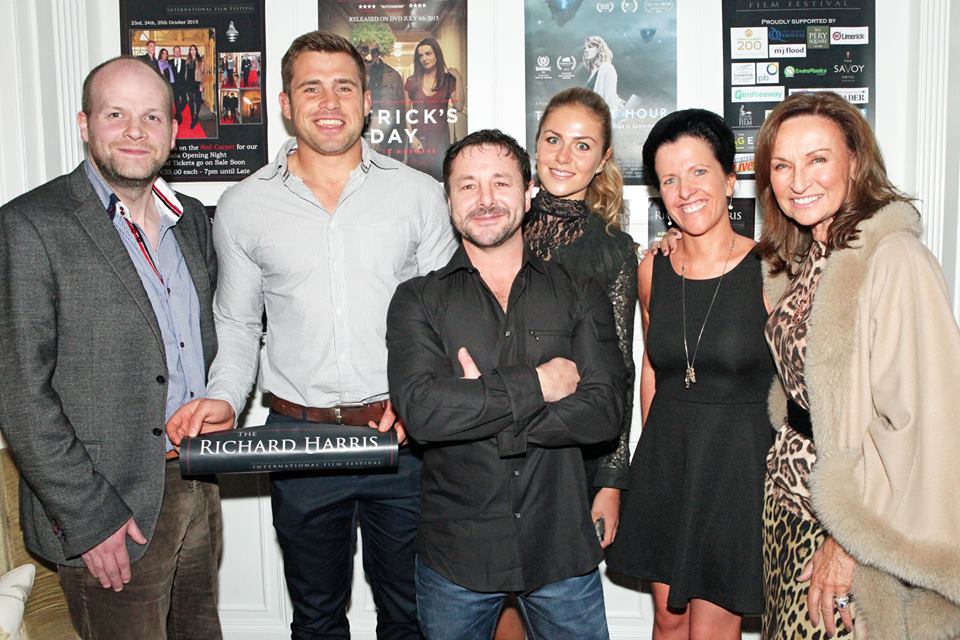 The 3rd Richard Harris International Film Festival (69 O’Connell St. 22nd – 25th October) was launched on the 6th of October in the beautiful surroundings of No 1 Pery Square, in front of many festival friends and supporters from the worlds of arts, sports and business. Limerick’s queen of style Celia Holman Lee was present as was Munster rugby star CJ Stander and his beautiful wife Jean-Marie. Board director Hayman Harris represented the Harris family. The evening followed on from a successful industry launch on Thursday the 1st of October in the Liquor Rooms in Dublin.

Festival director Zeb Moore announced an exciting programme of diverse films – from as far as field as Thailand, Australia, India and the US – and events including the return of the popular industry networking evening and Q&As with directors and producers. The effervescent Zeb also announced an acting master class with the incredibly talented Terry McMahon. The new creative direction undertaken by Zeb and Sylvia Moore has also resulted in two production companies holding an open casting call over the weekend.
Zeb announced some new additions to the programme including an image competition, monologue competition and a cultural trail touring some of Limerick’s most famous hostelries in the company of poets, actors and entertainers.  Zeb emphasised that as the festival has grown, the organisers are keen to maintain the personal touch.
Festival chairman Rob Gill said that the festival was founded in 2013 with a small budget but big ambition and that ambition is being realised with hundreds of submissions from 25 different countries this year.

RHIFF organisers acknowledge that this festival would not be possible without support from sponsors and the people of Limerick, offering them a special thanks: “On behalf of the organising committee we would like to thank you for your interest in The Richard Harris International Film Festival. This Irish film festival will celebrate the life and works of Richard Harris. Richard was not only a well-known Limerick and Irish actor, he was also a singer, theatrical producer, poet and film director of immense ability and charisma.”

Unveiling of Richard Harris Memorial Plaque at Charlie St. Georges Pub, in conjunction with Limerick Writers Centre as part of their Literary Trail of Limerick will take place at 5.30pm. Jared Harris will be reading some of his father’s unpublished Poetry selected specifically for this occasion.

A workshop will be held at 69 O’Connell Street (formerly Belltable Arts Centre) at 7pm, titled ‘From Script to Screen – How to Write, Produce and Distribute Your First Feature Film’, facilitated by Stephanie and Sean McConville, from Frenzy Films.

8.30The opening Screening of ‘The Quiet Hour’, directed by Stephanie Joalland, and starring Dakota Blue Richards, Karl Davis, Zeb Moore and Liam O’Brien, will be held at 8.30pm. This feature film was shot entirely on location in Templemore, Co Tipperary.

“Set against the backdrop of an alien invasion that has seen the earth mined for resources, ‘The Quiet Hour’ riffs on Sam Peckinpah’s seminal ‘Straw Dogs’ to wonderful effect” – Sebastian Caine – Raindance Film Festival 2014 “

The always anticipated Gala Red Carpet Event will kick off at 6.30pm at 69 O’Connell Street. An awards ceremony will take place, offering the ‘Richard Harris Outstanding Talent Award’, before a gala night screening of ‘A Man Called Horse.’ Directed by Elliot Silverstein, the film features an English aristocrat in 1852, captured by Indians. He lives with them, beginning to understand and accept their lifestyle. Eventually he is accepted as part of the tribe and becomes their leader.

The Gala Evening continues when guests move to the George Boutique Hotel, O’Connell Street for a hospitality event which is a fast favourite of previous years attendees. Prosecco reception and food created by DaVincenzo’s especially for the occasion. This year, limited tickets to this event will be made available. Join Local, National and International Invited Guests at this prestigious Event.

Saturday is an event-packed day for the festival, with a number of film screening throughout the day. From 9.30am – 12.30, there will be a Short Film Screenings at 69 O’Connell Street.

At 2pm, a feature screening of Tom Waller’s ‘The Last Executioner’ which is inspired by real events, tells the remarkable true story of Chavoret Jaruboon, Thailand’s last machine-gun executioner -a wild rock ‘n’ roll guitarist who took the job at the “Bangkok Hilton” to support his family – facing a lifelong struggle with ensuing good and bad karma.

At 4pm, a feature screening of Jim Lounsbury’s ‘Love is Now’ will be held. Focused around the questions: What if you had one chance to live in the moment and you
missed it. How far would you go to get it back? Love is Now is an intriguing yet mysterious drama chronicling a summer of love for experienced photographer Audrey and aspiring snapper Dean.  Propelled by new love and Audrey’s free spirit, the couple embarks on a formative country adventure following the NSW Harvest Trail where they discover significantly more than they ever expected along the way.

“If you are looking for Australia’s very own version of the Notebook, then you simply can’t go past this movie! Visually stunning and well-written I give it a 10-out-of-10” Jana Hocking, highheelsandhangovers.com.au

The packed Saturday will also include a special screening of Limerick Of Culture 2014 Bursary Short Films – “A Clockmaker’s Dream” (Cashell Horgan) and “Lost & Found” (Liam O’Neill). A Q&A with cast and crew of both short films will also take place.

The Saturday night will finish up with Late Live Music at Dolans Warehouse, followed by DJ, starting at 10pm.

From 9.30am to 12.30, Short Film Screenings will be held at 69 O’Connell Street. From 12pm to 4pm, there will be an acting workshop with award-winning director, Terry McMahon. Places are limited, please send CV/bio to [email protected]

A 2pm feature screening of Nicholas J Engan’s ‘Kandiyohi’, an action-packed modern-day western that brings the sleepy backdrop of rural Minnesota alive with violence and suspense, will also be held on the day.

5.00pm Feature Screening of ‘The David Dance’,written by Don Scimé and directed by Aprill Winney will be featured at 5pm. The film tells the tale of David, soft spoken, shy and unsure of himself. However, as his on-air alias, “Danger Dave” – the host of the local radio show, “Gay Talk,” in Buffalo, New York – he’s poised, witty, and everylistener’s best friend. His sister, Kate, is a thrice divorced banker with a yen for classical music and cats. Though successful, the siblings suffer from a secret, yet vast, sense of inadequacy. Kate decides to adopt an orphan in Brazil and asks David to be a father figure. David struggles with his self-doubt while gawkily romancing his co-worker. Past and present
intertwine in this bittersweet winter’s tale of a man learning to love and accept himself.

The closing screening of the festival will be held from 8pm to 10.30pm, with Terry McMahon’s ‘Patrick’s Day’, the story of a young man with mental health issues who becomes intimate with a suicidal flight attendant, his obsessive mother enlists a dysfunctional cop to separate them. A Q&A session with Terry will follow.

The festival will come to a close at 11pm with a festival wrap party at the Savoy Hotel, Henry Street.

Get tickets for the Stephanie Joalland and Sean McConville workshop here

Get tickets for the opening screening of ‘The Quiet Hour’ here

Books tickets for the screening of ‘The Last Executioner’ here

Book tickets for the screening of ‘Love is Now’ here

Book tickets to the screening of ‘Patrick’s Day’ here