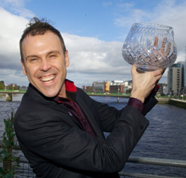 Richard Lynch, the driving force behind the on-line phenomenon, I Love Limerick, which is dedicated to portraying Limerick city in a positive light, has been named the Limerick Person of the Year 2011.

Richard was revealed as the winner by Minister for Finance, Michael Noonan who was guest of honour at a gala awards dinner in the Clarion Hotel on Monday afternoon.

On accepting his award, the St Joseph’s Street native told the attendees – which were made up predominately of Limerick people including last year’s winner JP McManus – that “amazing things are due to come out of Limerick and we must own our destiny and stick together.”

“I Love Limerick.com is really about all the volunteers, the photographers, the editors – everyone that works so hard to showcase the fabulous work that takes place here and I really can’t believe that I’m Limerick Person of the Year!,” smiled Richard before paying tribute to his parents Florence and Eric Lynch.

Richard was nominated alongside 11 other outstanding Limerick people including Mark Quinn, the youngest Irish person to climb Mount Everest and fundraiser Tina O’Gorman.

Minister Michael Noonan paid tribute to the nominees who were the 12 winners of the Limerick Person of the Month awards and featured in our sister paper the Limerick Leader.

The minister also told the attendees of his hope for a new vibrant “living” city centre with the Opera Centre acting as the “driver” in terms of progressing the redevelopment.

“The city must be alive right into the evening. There is no point in locking doors at half past five in the evening in offices or retail and everybody going home, it must be a living city. There is an awful lot we can do and we have a great opportunity now in changing the structure of the city as well as admiring the work of the individuals who have been honoured here today,” he said.

Limerick Leader and Limerick Chronicle editor and awards judge Alan English paid tribute to the 12 nominees on their awards.

“It is something that you can cherish for the rest of your life and I really congratulate everybody who has been given that award. It’s something very special,” he said.

The awards are sponsored by the Limerick Leader, Southern and the Clarion Hotel.