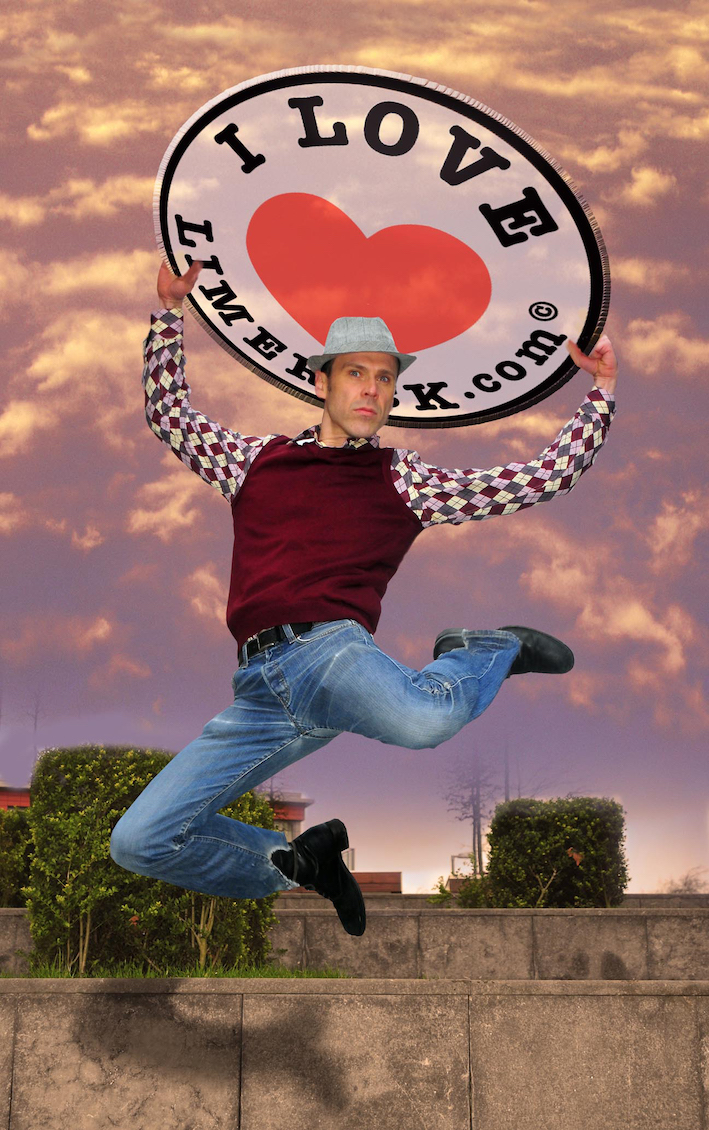 Richard is a presenter, producer, publicist, community activist, and actor.

Richard was born and raised in Limerick city centre and his parents owned the well-known Limerick singsong house ‘Erics’ for 42 years.

He graduated from Limerick with a marketing degree from Limerick Institute of Technology in 1991 and in 1992, he moved to New York where he lived for 15 years working with the likes of Cosmopolitan Magazine; Central Talent Booking, an agency that booked stars for a variety of shows including the David Letterman Show; and as store concierge for retailing giant Barneys.

Richard attended the William Esper Conservatory in NY where he graduated from their prestigious acting program in 2006.

I Love Limerick came about in 2008 when Richard came back home from New York City for family reasons.

“In 2008, after 15 years in New York, I decided to move back permanently to Limerick to mind my parents full time as their carer. They were both elderly and my mother had Parkinson’s disease for over two decades.

“At the time Limerick was getting what I felt was an unfair reputation in the media. Yes, Limerick had her troubles and no one was denying that but the city was also being used as a scapegoat by the national press. No one highlighted the crime in other cities to such an extent. This constant deluge of negative press was really affecting the livelihood of the Limerick people. Busloads of tourists were literally bypassing the city. Limerick has always been the underdog. Always.

“I was living in New York and had this awful impression of my own hometown but this all changed when I moved home. I was blown away by all the talented, creative people living in Limerick,” he said.

In 2008, Richard produced Limerick LGBT Pride and turned it into a week-long festival and called it ilovelimerick.com.

“I wanted the festival to be integrated and inclusive and that was the birth of I Love Limerick. I Love Limerick was born out of Pride. My pride in my hometown and the LGBT festival itself. Since 2008 I have been involved in Limerick LGBT Pride and in 2018 I was honoured to be the Grand Marshall of the Limerick Pride Parade for over 10 years of service to Pride.”

I Love Limerick is a creative project driven by, motivated and inspired by Limerick people and focused entirely on the city and her citizens. Through a series of exciting and well-produced documentaries, lifestyle programming, interviews, and photography, the I Love Limerick project aims to encourage wider respect and pride for the city by focusing on the wealth of interesting, talented and motivated people who live, work and create here by highlighting everything positive about Limerick.

While he might be the public face of I Love Limerick, Richard is adamant it could not have survived without the buy-in and support of many in the city.

“I had been doing public access TV for years in New York so when Limerick Pride 2008 was over I decided to take ilovelimerick.com and develop it into a Youtube channel to make videos that would depict Limerick in a positive light. From there it developed into the website it is today. I would not have been able to do this on my own. You are only as good as the people you work with and I have some amazing people on our team, such as photographer Dolf Patijn, who have been with me on the journey since the beginning.”

Richard has been producing photo shoots and large-scale events for over a decade and he writes a weekly column in the Leader newspaper since 2010. He won an award at the Metro Éireann Media & Multicultural Awards 2011 for promoting multi-culturalism online and was named the Limerick Person of the Year in 2011.

On a personal note, being crowned Limerick Person of the Year 2011 in front of his parents Florence and Eric was important because, without them, his project may not have survived.

“They meant everything to me. After my mother passed I found a case of newspaper clippings that she has collected about my work. There would have been no I Love Limerick if it were not for my parents Florence and Eric as they instilled this pride and love for Limerick in all their children.”

In 2012 he starred as one of the Ugly Sisters alongside Myles Breen, Richie Hayes, Twink, Leanne Moore and Dustin the Turkey in the panto ‘Cinderella’ at the University Concert Hall Limerick and made a return to panto with for the production of the hugely successful panto ‘Aladdin’ in 2013 playing the bumbling Chinese Policeman, in 2014 playing alongside Keith Duffy in ‘Jack and the Beanstalk’ and again in the 2015 production of ‘Sleeping Beauty’. In 2016 he played Monty in ‘Beauty & the Beast’ and in 2017 he returned again for his sixth consecutive year alongside Samantha Mumba and his good friend Myles Breen to be an Ugly Sister all over again for a new version of ‘Cinderella’. In 2018 he starred as the Magic Mirror alongside Katherine Lynch as the Evil Queen in ‘Snow White” and returns playing the Emperor in Aladdin for 2019.

After his parents passing Richard founded his own PR company called Richard Knows and he continues to do his work with I Love Limerick.

The I Love Limerick concept is very much a community-driven project that aims to document life in Limerick so that in 20 years time people can look back and remember the events that were making the headlines. “Our tagline is two plus two equals seven. There is strength in numbers. There are a lot of levels to what we do. We work closely with the Limerick Youth Service, Doras Luimni, St Munchin’s Community Centre and Cliona’s Foundation to name a few. We are very connected to them and educate them on social networking and publicity. I provide mentoring and have helped countless businesses’, community organisations and individuals get a presence in the press and online. Creative consultation, social media, publicity, and marketing all are a huge part of the process. We want to highlight a huge number of communities and people. All these communities need to be given a voice. We want all these amazing people from Limerick to feel like a star. We are giving Limerick people a platform to express themselves.”

You can view some examples of his work below: