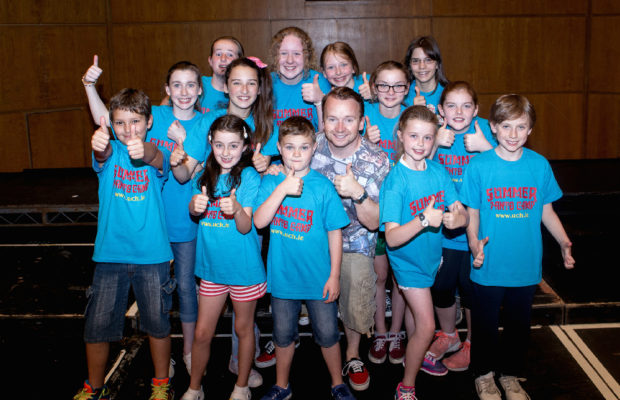 University Concert Hall Panto Star Richie Hayes is back this summer with an exciting new Musical Theatre Summer Camp 2017 for budding stars aged from 7 to 16.

The Richie Hayes UCH Musical Theatre Summer Camp 2017 will be streamlined according to age, with all levels catered for, as the various groups work with classic musicals including The Jungle Book, Annie and Hairspray. It will all culminate with a fantastic end of the camp show for parents and friends.

This is the perfect opportunity for your children to work with industry professionals. Together with singing, dancing and acting, other aspects of production including creating props and costumes, improvisation, stage combat and much more will be explored in the course of the week. For children and young teens aged 7 – 16+, week week-long courses are the perfect platform for budding stars who love to sing, dance act and, of course, have fun! With a focus on musical theatre, singing, improvisation, stage combat and much more, Panto Camp is the ideal way to build confidence, make new friends and learn lots about the magic of behind the scenes at panto.

Richie Hayes has starred in the University Concert Hall panto since 2012, and he will return this year as Buttons in “Cinderella”, together with Dayl Cronin who has just been announced as the Prince.

Richie has worked in the entertainment industry from a young age, running a very successful stage school in Waterford for over 8 years. He became a household name in 2012 when he appeared in “The Voice of Ireland” and “Celebrity Bainisteoir”. As well as starring in the UCH panto, he has also starred in and directed Pantos in the Gaiety and in Waterford as well as fronting the world famous Jury’s Irish Cabaret.

Spaces for the Richie Hayes UCH Musical Theatre Summer Camp 2017 are limited and are expected to fill up fast so book early to avoid disappointment.