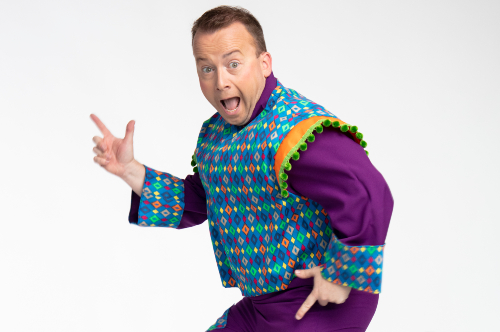 Having spent 20 years working professionally in Pantoland and appearing on shows like Mrs Browns Boys and The Voice of Ireland, Richie Hayes has become a household name in Ireland. This Christmas Richie is coming back to Limerick to play his iconic role of Wishy-Washy in the UCH panto Aladdin alongside Johnny Ward, Fair City favourite and grand finalist of RTÉ’s 2019 Dancing with the Stars alongside Limerick panto regulars Myles Breen and Richard Lynch running until January 5, 2020.

We caught up with Richie to get the scoop on his career in the entertainment world and what to expect for the future!

1. You’re a jack of all trades in the entertainment department having featured in pantomimes, TV shows, albums and more. Were you always an entertainer?

This is my 20th year working professionally in the business, I did 10 years before that on the amateur circuit. I’m from a musical family, my mam and dad are singers. As I say, when I was born, they gave me a microphone instead of a bottle of milk.

I got the real urge when I was about 10, my first place on stage was Yanomamo and Sting was involved with it, it was around the time of the Amazon rainforest devastation. They took 2 kids from every school around the South East of Ireland and you had to audition for it, and I did it and got in.

That was my first taste of it and I got the bug from that! I then joined the Waterford panto society and it all took off from there, I started taking part in local musicals and that’s where I learned my trade!

2. Did you always know you wanted your niche to be panto?

I did 10 years with the Waterford panto society. Then from about 18 to 21, I started auditioning for WestEnd musicals when they use to come to Dublin for open calls and on a couple of occasions, I was taken back to London at that age with no trainer or anything like that and that’s when I really went “okay if these people are taking note of me, I must have something”.

The issue was with my stature and my height, I was always either too young looking to go into the adult ensemble or too old-sounding to go in with the kids or teenagers. The 3 big ones I kept going back for were ‘The Beautiful Game’, ‘Whistle Down the Wind’ and ‘Oliver’.

I auditioned in front of Cameron Mackintosh and Andrew Lloyd Webber (Phantom of the Opera) many times but it just never worked out for me. I was always tipping away with panto and that’s when I decided panto is my niche and I thought let’s concentrate on that.

And finally, after 6 months of banging on the door of The Gaiety, they saw me and there on the spot, they offered me the part of Wishy-Washy and rest is history! I started with Wishy-Washy and 20 years later, I’m still playing the same part!

3. Pantomimes have been a huge part of your career, having spent over 10 years performing in pantos in Dublin and Limerick. How has this journey through Pantoland been for you?

I absolutely love it, it’s like a drug to me. It kills me because it’s such a tough gig to do because your energy needs to be so high all the time and I’m not getting any younger, each year gets a little more physically demanding to do it, but I love it.

I also work as an associate producer on the UCH panto now so I’m involved in the production side of things and the creativity side of the show that actually becomes the panto so I am working panto all year long.

4. You have become part of a huge tradition in Limerick. What do Limerick and its people mean to you?

I love it, it’s such a part of Irish tradition. Even when I was in The Gaiety, for the 10 or 12 years I was there, I’d have people coming up to me saying they’d been coming for 20 or 30 years.

Their grandmother started it off as a tradition and now the kids are bringing their kids and so on. It’s such a part of Irish tradition. Its great Limerick has that now too. It’s great to be a part of that.

I was there year one when there were empty audiences and now we go out and it’s more or less full houses every night. You know people appreciate what we do and what we’ve brought to Limerick.

5. In addition to your much-loved roles in pantos, you’ve also featured in the hit shows, Mrs Browns Boys and The Voice of Ireland. What were those experiences like?

The Voice of Ireland helped put me on a national level as opposed to just within the pantomime world and I’d reached a stage in panto where I needed to get that bigger profile on a wide spectrum so that was a huge reason for me to go into The Voice.

I never expected to get as far as I did but it was great. It was a fantastic experience and I wouldn’t change it! That’s really what brought me to Limerick in a way because after that Robert C Kelly contacted me and said, “I’d like you to come to Limerick and start doing panto down here with us”.

In terms of Mrs Browns Boys, I was meant to do that skit the same year as The Voice. I got a call from Brendan O’Carroll, saying he’d a storyline in place and I was all set, contracts signed, everything. Then I got a call the night before I was due to fly to Glasgow to film it, saying that part of the storyline had been pulled because of a shortage of airtime so it was devastating
at the time.

But Brendan said to me “don’t worry, it’ll come back around” and true to his word, 5 or 6 years later I got a call from him directly and this time it happened! The real cherry on the cake was when I got to sing Mistletoe and Wine at the very end because that wasn’t the plan, usually one of the main cast sing it but because of The Voice, they decided they wanted me to sing.

6. You have a couple of albums released. Should we expect to see more from this musical side of you in the future?

I released ‘What About Me’ right after The Voice and then I decided to take a little break and look into the country music scene in Ireland and I released an album called ‘Newer Road’.

Then I moved to Florida and have a studio in the house here so I’m always working away on stuff myself. I’ll have a Christmas album out soon aimed at the kids and we did that last year and it worked really well.

7. You and your wife, Erica perform regularly together. Will your son Taylor be in entertainment too?

Yeah, he’s been around it his whole life. He comes to most of our shows. We haven’t pushed him at all, just because I feel just because he’s our son doesn’t mean that’s what he wants to do so when we do our panto camps in UCH he’s always there but has been too young to participate but then one year he just jumped up on the stage and started getting involved.

We didn’t make a fuss or anything we just let him off and we’re still like that with him. But he has started singing lately and he’s a great voice but I’m just letting him find his own feet and if he wants to do it we’ll give him all the support and opportunities he needs. It does look like it’s in him though!

8. What are your dreams for the future?

I made the move to Floria two years ago with Erica and Taylor and we have the Variety Show here and that’s working really well. The plans for the future is the panto will hopefully keep growing from strength to strength, I don’t see myself going anywhere else for a long time please God and I’m loving the fact I’m involved in creating it.

I’ll keep on stage for as long as my body will allow me but at least I have production too. I would like to perform a bit more in Ireland, but we have got a couple of things up our sleeves in terms of maybe bringing The Variety Show to Ireland for a couple of shows.

For tickets to Aladdin go HERE

Aladdin the Specsavers Limerick Panto at University Concert Hall is now the hottest ticket in town with all shows selling out in advance, so to grab the best seats, for the day that suits you, book now.