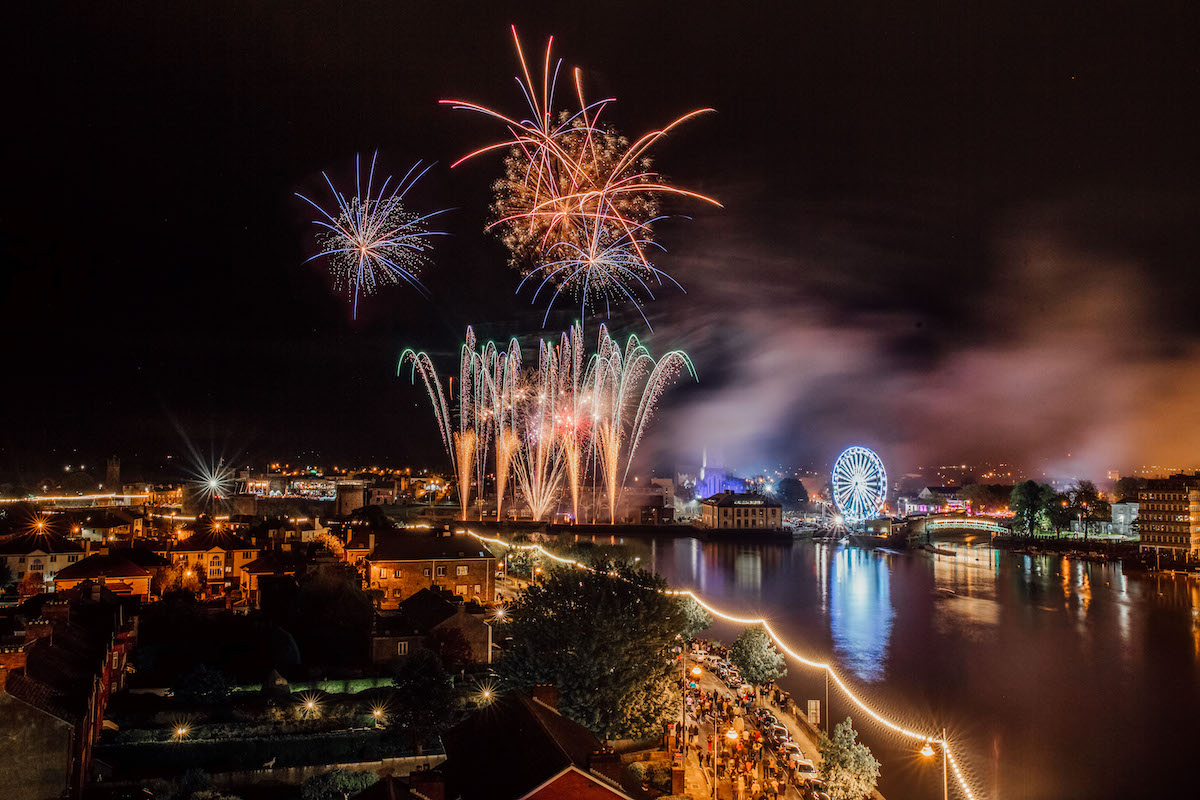 Limerick has proved the place to be this May Bank Holiday weekend with more than 120,000 people enjoying the city’s biggest festival Riverfest.

Inclement weather failed to dampen the spirits of the attendees as the magic of Riverfest 2022 descended on the city for the first time since the pandemic.

From fireworks to the daring zipline, delicious bbq to checking out what it’s like aboard one of naval ships to the buzz of the Riverfestival Village, or hanging about at bingo with Fidget Feet, there was something for everyone.

Added to the Riverfest 2022 mix was the Regeneron Great Limerick Run and Dolans Live at the Castle, and a host of other events making Limerick truly the place to be for the May Bank Holiday weekend.

A spectacular fireworks display on Sunday evening saw around 30,000 people line the quays and strands around Limerick to catch a glimpse of the show as the skies were lit up in what has become a firm favourite of Riverfest weekend.

Earlier on Sunday, there were fireworks of a different kind as thousands of people participated in the Regeneron Great Limerick Run as the marathon, half marathon and 6-mile distances were covered by the athletes through the streets of Limerick.

A Party in the Park for the runners and others took place in the People’s Park after the run to give them a chance to cool down after their races and soak up the relaxing vibe.

One of the most popular attractions at the festival was the LE James Joyce naval vessel where more than 8,000 people enjoyed a tour of the vessel. For many, it was the first time behind the walls of Limerick Docks and, with thanks to Shannon Foynes Port Company, gave them a glimpse into the operations of a working port, as well as pretending to be a member of the Irish Naval Service.

The boardwalk on Howley’s Quay was the location for the now traditional BBQ on Saturday, with companies and charities from across Limerick and Midwest cooking up a storm for the hungry 15,000 spectators. Mouth-watering burgers and sausages, as well as tempting brightly coloured and inviting food options, were on the menu. And of course, the Boardwalk was part of the Scavenger Hunt along the Three Bridges Route.

The BBQ was a competition with the Overall Winners being Limerick Suicide Watch.

Riverfest started off on Friday as Limerick’s style icon Celia Holman Lee showcased the best of Limerick fashion to packed crowds of people in Arthur’s Quay Shopping Centre, while the Air Corps provided a flyover.

And as always the Riverfestival Village was centred in Arthur’s Quay Park welcoming around 65,000 people over the four days who enjoyed the entertainment, fun and shows of Riverfest, carnival rides and music.

The water-based activities saw huge numbers enjoying the popular zip line across the River Shannon while stand-up paddleboarding, kayaking and dragon boating had many getting a different perspective of the great river.

The Potato Market/ Hunt Museum has a different vibe with arts and crafts on show as well as the re-located 40ft Panoramic Wheel and the Eco Showboat Mayfly providing a wonderful change of pace, attracting 5,000 visitors.

To cater for those with additional needs a chillout zone at the Hunt Museum Garden welcomed those who wanted to unwind but still enjoy Riverfest and which was supported by the ASD Ireland.

Mayor of the City and County of Limerick, Cllr Daniel Butler said, “Riverfest showcases Limerick to its fullest and best. There was such a fantastic atmosphere around the city with everyone enjoying themselves. From the Riverfestival Village to the Naval vessel and the water enthusiasts there was just so much happening and plenty of free activities and events to keep all ages happy.”

“Riverfest has proved itself to be a great festival and one to be proud of. But we must strive to keep it interesting and attractive to locals and visitors alike.”

Pippa Little, Arts Officer, Limerick City and County Council said, “For Riverfest, Limerick was thronging with people of all ages enjoying the programme of events and celebration of our city, and the place of the River Shannon in shaping our identity. Highlights included the fireworks display, sizzling BBQ competition, House! An aerial drive-in bingo show with Fidget Feet Aerial Dance Theatre, launch of the Eco Showboat with the festooning of the city with Mayfly banners and Lumen Street Theatre’s Three Bridges Scavenger Hunt.”

Denis Tierney, Head of Marketing and Communications, Limerick City and County Council said, “Limerick was absolutely buzzing for Riverfest this year and everyone was so glad to have it back in person. Riverfest demonstrates first-hand the impact that festivals and large scale events have on our city from the thousands who flocked into Limerick to enjoy the festivities over the last few days.”

Riverfest Limerick 2022 is run on behalf of Limerick City and County Council by Grooveyard Event Management.