By Richard Lynch on October 24, 2017@richanthon 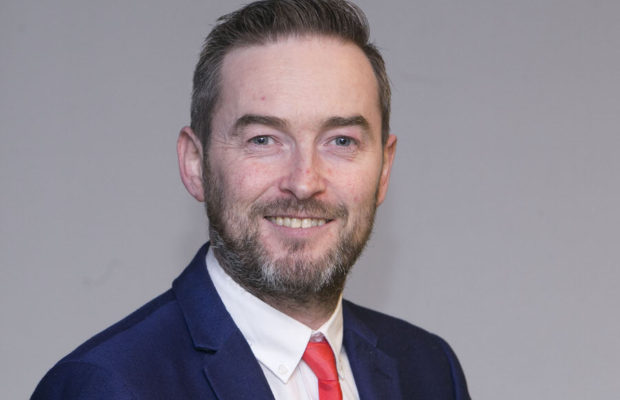 Limerick man Rob Laffan, creator of TippyTalk, an app for children with autism, suffered a serious head trauma and brain injury while attending a tech industry conference in Minneapolis, USA.

Rob fainted at the conference and fell back and hit his head, which resulted in a skull fracture. It later emerged that he had also suffered two bleeds in the brain.

He is now stable but the severity of the injury means he needs to be monitored constantly and may yet need surgery. While he initially recovered in the hospital, he then began to suffer headaches, was in a confused state and was immediately placed in intensive care once doctors realised how serious his condition was.

Rob has a long road to recovery ahead, and will need to stay in the States for at least a month more, and will need rehabilitation therapy for some time.

Rob’s wife Emily is with him, and his daughters Megan and Sadie are in Ireland with family. Sadie has severe autism and needs around-the-clock care.  Her condition inspired Rob’s TippyTalk system of communication for the non-verbal. A Go Fund Me Page has been set up to help Rob and his family, you can donate here. 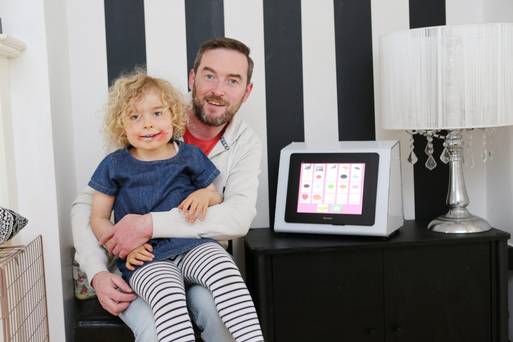 Rob pictured here with daughter Sadie who was the inspiration for TippyTalk.

In August 2015, Rob received a Limerick Person of the Month award after developing his touchscreen device, Tippy Talk. Rob was in the second year of his degree course in Industrial Automation and Robotic Systems in LIT when he came up with the concept for TippyTalk. By the end of Rob’s first year at LIT, his daughter Sadie had been diagnosed with autism spectrum disorder. Rob says that the idea for TippyTalk actually came from Sadie, “it was a late night and I was standing at the back door when my phone beeped and Sadie brought it to me, I asked was she sending me a message and the penny dropped”. Rob went on to spend the next 6 months developing and testing the TippyTalk app with Sadie.

With over 3000 users in 74 countries, the TippyTalk app helps users communicate their desires, feelings and needs to parents through the transfer of pictures to text messages. This touchscreen device is essentially a tool that will grow and change with the user as it provides the user with pictures that they know and understand and translates these into text messages with can be sent to siblings, parents, and caregivers to allow them to communicate.

The TippyTalk app which now has 70/80 million hits across various platforms was developed by Rob Laffan while he was studying at Limerick Institute of Technology.

Although TippyTalk was created for non-verbal autism TippyTalk can cover many areas of verbal disabilities such as stroke victim, Parkinson’s patients, and brain injury victims, to name but a few.

Enterprise Ireland has classified TippyTalk as a high potential startup and TippyTalk has received 220k euro investment from them. TippyTalk has also secured many Irish and American investors and there has been a demand from special needs schools across the US for a TippyTalk app pro version.

While the TippyTalk app has received worldwide success, Rob spoke about the true success for him with this app. Rob shared a heartwarming story about a mother and son who are using TippyTak to communicate He said “my most favourite of all is that a blind single mother and her son with non-verbal ASD are now successfully communicating using TippyTalk. That alone makes it all worth it.”

Sadie needs her parents home so please help with whatever you can spare. The family is seeking to raise money for his treatment through public donations.

A table quiz will be held in the Spotted Dog pub in Janesboro on Thursday, November 2, from 8pm and all are welcome.

For more stories on Rob Laffan and TippyTalk click here