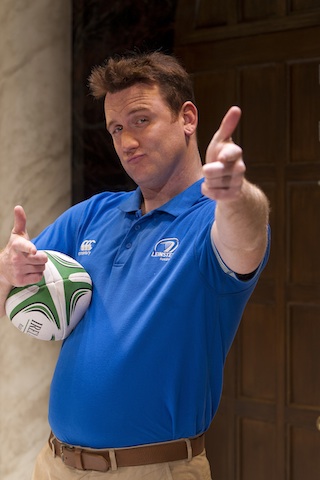 Ross O’Carroll-Kellys Breaking Dad at the University Concert Hall Limerick for one week only!

★★★★ ‘Another fine farce from Paul Howard…brilliant – Mail on Sunday

With record-breaking sales of over 45,000 tickets, rave reviews and standing ovations every night, Ross O’Carroll-Kelly’s Breaking Dad is set to come toUniversity Concert Hall, Limerick for this first time, for one week only this March.

Speaking this week, Ross O’Carroll-Kelly author, Paul Howard said “I am very excited that Breaking Dad is returning and pleased to welcome three new and brilliantly talented cast members. We had enormous fun and some very memorable nights in Dublin and Cork during the first two runs in 2014 and 2015. I’m really thrilled that those people who didn’t get a chance to see it on those two occasions will have one last chance to see it, and

that we’re getting a chance to stage the play in front of a brand new audience, with the premiere in Limerick, at University Concert Hall, where the people love their rugby and love mocking Ross O’Carroll-Kelly types almost as much.”

Starring Rory Nolan (Druid Murphy, Citizen Charlie, Fair City) who reprises his role as Ross, with Laurence Kinlan (Love/Hate, The Guard) and Philip O’Sullivan (Vikings, Fair City) who are also returning to their roles as Ronan and Charles. They are joined by Aoibhín Garrihy (The Fall, Fair City) as Sorcha, Roisin O’Neill (Sive in the title role for the Abbey Theatre) as Honor and Emmet Byrne (Red Rock) as Traolach, the ‘new Tiger in town’.

With a general election about to be announced imminently, the return of Paul Howard’s satirical masterpiece has never seemed more prophetic, or timelier.  The play is set in the year 2022. Ireland is in the midst of an unexpected economic boom. The country’s debts have been repaid in full, the people are once again selling houses to each other for five times what they’re worth and Bertie Ahern is set to become Taoiseach again at the age of 71. Ross O’Carroll-Kelly is entering his middle years without a care in the world.  He’s got a son who’s a professional footballer, a career-minded wife who’s about to land the job of her dreams – and, like good Cognac, his looks just keep improving with age. For Ireland’s most eligible married man, life is good. Until his teenage daughter arrives home from Wesley one night with the captain of the Blackrock College rugby team – and Ross is forced to face up to the lesson that you must reap what you have sown.

Breaking Dad is the third Ross O’Carroll-Kelly stage play, following the hugely successful The Last Days of the Celtic Tiger (2007) and Between Foxrock and a Hard Place (2010).

One of Ireland’s most popular writers, Paul Howard is a multi award-winning novelist.   His fictional character Ross O’Carroll-Kelly has become the star of a critically acclaimed series of books that satirized Ireland during the years of the boom and the bust, and have sold over one million copies in Ireland alone. A remarkable eleven books in the series (including the current book, Seedless in Seattle) have been shortlisted for Irish Book Awards, and the stage play Breaking Dad is a must-see for all Ross fans.

The play is directed by Irish Times Theatre Award winner Jimmy Fay (The Last Days of the Celtic Tiger, Between Foxrock and a Hard Place) with sets designed by Paul O’Mahony, costumes by Catherine Fay and lighting by Paul Keogan.

Landmark Productions is one of Ireland’s leading theatre producers.  The company is led by Anne Clarke, who is the recipient of this year’s Special Tribute Award at the Irish Times Irish Theatre Awards 2016. Each year, the Special Tribute Award is given to an individual who has made ‘a vibrant and outstanding contribution to Irish theatre’. Landmark’s 2015 productions include Enda Walsh’s The Walworth Farce starring Brendan Gleeson, Brian Gleeson and Domhnall Gleeson; the multi award-winning musical Once, which played a hugely successful run and is set to return to the Olympia Theatre next summer; and the world premiere of a new Donnacha Dennehy / Enda Walsh opera, The Last Hotel (a co-production with Wide Open Opera), which premiered at the Edinburgh International Festival in August, before touring to London, Dublin and New York.  Other recent productions include Enda Walsh’s Misterman and Ballyturk, starring Cillian Murphy, Mikel Murfi and Stephen Rea, both co-produced with Galway International Arts Festival), and Mark O’Rowe’s Howie the Rookie, starring Tom Vaughan-Lawlor.   Landmark received the Judges’ Special Award in the Irish Times Irish Theatre Awards for 2011, in recognition of its ‘sustained excellence in programming and for developing imaginative partnerships to bring quality theatre to the Irish and international stage’.