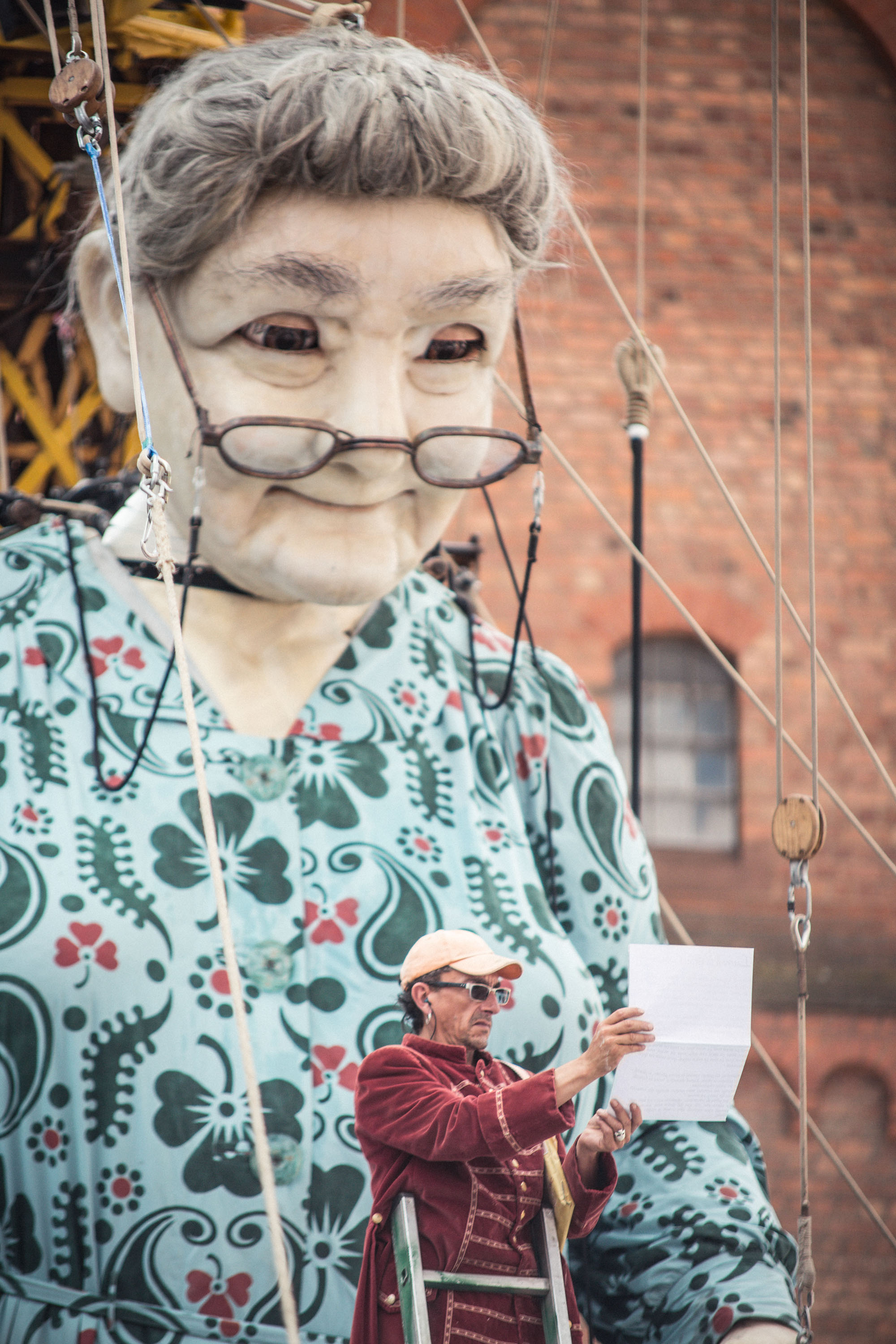 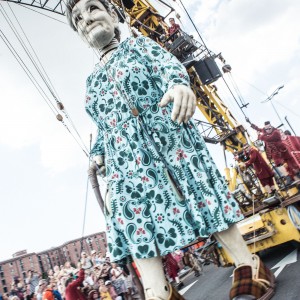 The giant Granny took a stroll through Liverpool, stretching her legs before her journey to Limerick

In less than six weeks’ time, the biggest event of Limerick City Culture 2014 ‘The Giants Journey’ will take place 5th, 6th and 7th September . It will be the single biggest event in Limerick since the Pope visited in 1979 with over 100,000 visitors.

On July 25, the huge giant Grandmother that will be live on Limerick’s city streets for 72 hours, was unveiled in Liverpool. A captivated audience of over 200,000 people young and old lined the streets of Liverpool today to witness the magical awakening and voyage of the 85 year old Grandmother.

Having been sleeping soundly for the last two day in St. George’s Hall in the city, she mischievously opened her eyes and awoke, greeting mystified revellers with her daring yet enthralling twenty five foot stance. With small feeble steps aided by her walking stick, her body disjointed by age, she took to her enormous twenty one foot wheel chair, as she began her journey on the streets of the city. The atmosphere was palpable as spectators looked astounded and genuinely moved by her magical presence. With over 70 Lilliputians, (people who operate the Giant), enabling her street voyage, the Giant had a well-earned siesta at Salthouse Dock. En route, the endearing old lady embarked from her wheel chair, balancing precariously on her walking stick clutching it with her vainy arthritic hand, to interact with crowd indulging in some of her loveable Granny characteristics. When she gets worked up though she could lift an elephant!

Everyone, young and old, was left with a truly valuable and memorable experience from this magical encounter. 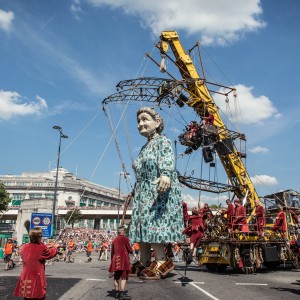 It takes a village to walk a granny…

Limerick awaits with bated breath the visit of this Irish/Bretagne Grandmother in her granny green dress embellished with shamrocks. She will act out an original tale, developed and specially scripted for Limerick. The city will be transformed as the massive Granny rambles through the streets cared for by hundreds of Lilliputians, transfixing audiences for a weekend of free entertainment as they follow her as she eats, drinks and sleeps on their streets.

Royal de Luxe has played to huge crowds in far flung locations such as Mexico, Chile, New Zealand and also closer to home in London and Liverpool. Despite demand for performances worldwide, Royal de Luxe will only perform in 3 countries this year; France, England and Ireland. Each territory where the troupe has performed, has reported a huge influx of visitors resulting in major economic benefits. According to a report commissioned by the Liverpool City Council in 2012, the troupe performed to over 800,000 people and earned in excess of €35 million in associated revenue. According to the report over 80% of the visitors that came to Liverpool travelled specially to see the Giant. The Limerick version will expect to see in excess of 100, 000 visitors making it the largest public event ever hosted in the streets of the city. The Royal de Luxe event is expected to generate a pro rata spend similar to its UK counterpart.

Stay up to date with news on Royal de Luxe at www.RoyalDeLuxeLimerick.ie  or read more about them here.

Because You’re Worth It