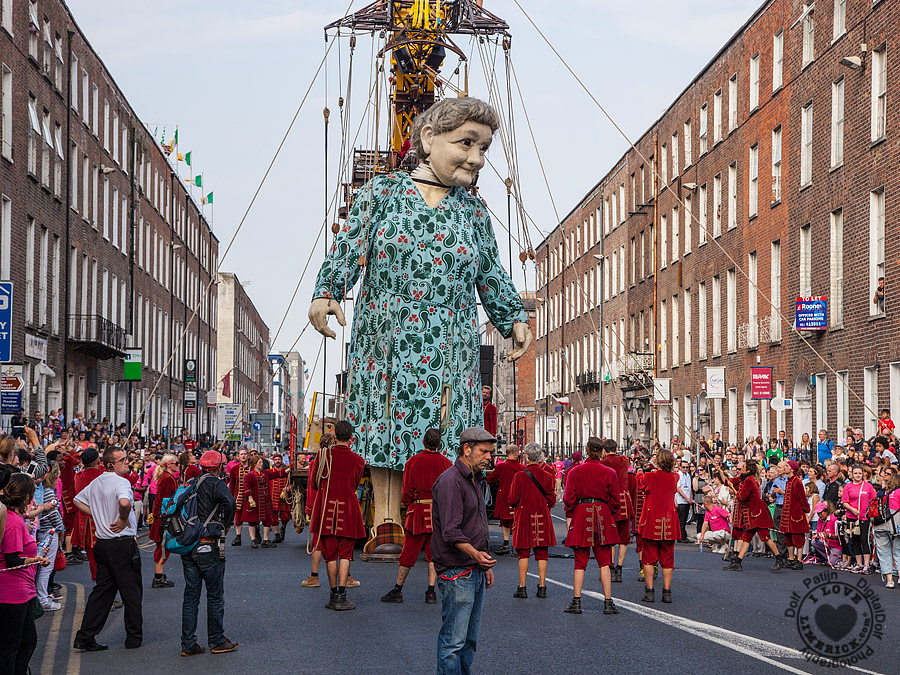 Huge crowds have greeted the #LimerickGiant to the city as she begins here three day journey.

Royal De Luxe Limerick Giant – Following months of preparations and planning, the 85-year-old grandmother finally arrived by rail at the Bus Eireann school bus depot shortly after 10am where several thousand people had gathered to see her arrival. An outpouring of joy, tinged with emotion, has greeted the arrival of Royal de Luxe’s Grandmother Giant to Limerick. The massive marionette was welcomed by an estimated crowd of 30,000 people as she walked her way through the city streets this Friday morning. There was a palpable feeling of joy among the thousands of children – both young and old – that gathered to greet the giant Granny, and for the Limerick City of Culture team, who have worked for more than a year on the huge production, the feeling was an overriding one of emotion.

After arriving via a specially constructed train to the Bus Eireann Transport yard on Roxboro Road – to the rear of Colbert Station – the Granny addressed the crowd, speaking through ‘interpreter’ – well known Irish actor – Louis Lovett: “Dear great noble inhabitants of Limerick, I salute you,” cried the huge giant, which cost the French street theatre company an estimated €2m to assemble and is only visiting this city, Liverpool and Royal De Luxe’s home city of Nantes this year. “I came here to prove the attachment I have for your country,” she added, to huge roars of approval from the crowd that had gathered to greet her.

With that, and with the help of some 26 Lilliputians propelling her, the Granny made her move down Roxboro Road, onto William Street and up O’Connell Street.

She paused along the way – outside Brown Thomas to open her ‘safe’ and outside the Chicken Hut to relieve herself – before making her way to Russell Park to have a ‘nap’ for the afternoon.

A huge traffic operation is in place, rendering the city largely pedestrianised for most of the weekend, and early estimates from Henry Street Garda Station was that around 30,000 people had come out to see the Giant’s Journey on Day 1, which is costing an estimated €1m to produce.

Some 50 people, including riggers and puppeteers, are involved in moving the 7.5m tall giant, while a huge truck carrying French post-rock band Les Balayeurs du désert pumping a beguiling mix of funk, soul, disco out over the heads of the crowd.

Photos by Cian McNamara for ILoveLimerick.com 2014. All Rights Reserved.