Home / Advert / RTÉ One Medical Series Want You To See a Doctor! 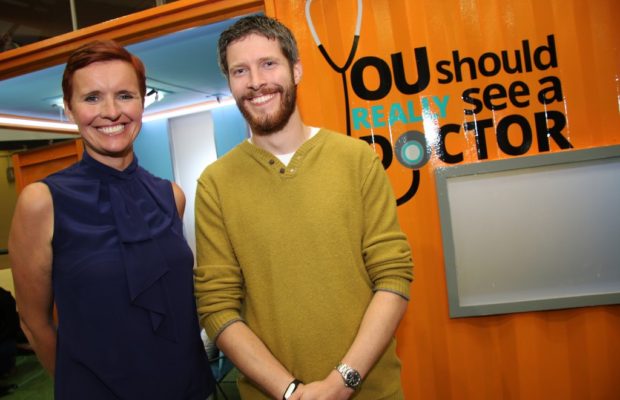 Worried about a lump, rash or pain? Have you been ignoring a niggling health worry? Are you looking for answers to your ailments? Well, You Should Really See a Doctor…

Not everyone sees the doctor when they should. Some are unwell but don’t know it. Some know they’re unwell but ignore it and do nothing. And still more think they’re unwell and do take action…  by researching their symptoms online, convincing themselves that they are more unwell than they actually are. All of them should really see a doctor.

This summer Dr Pixie McKenna and Dr Phil Kiernan are returning with their pop-up clinic to events across the country for their RTÉ One Medical Series You Should Really See A Doctor.

Pixie and Phil will meet the invisibly sick, the obviously sick, and the people who think they’re sicker than they really are for their new RTÉ One Medical Series. They’ll tackle everything from migraines to mysterious rashes. The doctors will face cases of ‘cyberchondria’ where people have googled themselves into health confusion. And they will medically observe and approach people at the event who look like they could have a potential health issue. We’ll follow the stories of several patients as they go on a journey to discover their true diagnosis.

Independent Pictures are interested in hearing from people who want answers to their health issues for their new RTÉ One Medical Series. Have you researched your symptoms online and would like Dr Pixie or Dr Phil’s advice? Having you been putting off a visit to your own doctor? Are you at the end of your tether and want answers? Whether it’s a new problem or something that’s been bothering you for years, then we want to hear from you. If you are suffering from health complaints from stomach problems, to sleep issues to skin problems we want to hear from you. Fill out the application form at

Best known for her role in Channel 4’s primetime, BAFTA-winning medical series ‘Embarrassing Bodies’ and ‘Embarrassing Bodies: Live from the Clinic’, Dr Pixie McKenna is the UK’s leading female media medic. In addition to her work on the hit show, she has presented several series of ‘Freaky Eaters’ for BBC 3 trying to tackle some of the UK’s weirdest food phobia/fetishes, ‘Food  Hospital’ (Channel 4) where she probed the myths and realities about food and health advice and ‘Health Freaks’ (Channel 4) where she dealt with bizarre home remedies and put the ones she believed might just work to the test!

As well these major flagship shows, Pixie has had appearances on a variety of other programmes as wide ranging as Celebrity Mastermind to This Morning. When not filming, Pixie spends her time writing columns for the Irish Mail and also hosts the weekly ‘Air your Ailments’ slot on Ireland’s Today FM. Pixie is a practising GP at London’s Harley Street, in 1999 she obtained her certificate in general practice training and membership of the Royal College of General Practitioners. She regularly attends and hosts Media Medic Events in London.

Phil qualified as a doctor from UCD in 2007 and is now a practising GP in Cork City where he grew up. As a GP, Phil deals with a wide range of medical problems every day. He has a keen interest in obesity and diabetes having worked at the obesity clinic in Loughlinstown. And he has conducted research into sleep habits. He has also worked extensively in stroke medicine.

Phil is passionate about good diet and activity levels coming from his own personal experience. When he first qualified as a GP, the busy but sedentary lifestyle led to him gaining three stone. In 2013, Phil spotted this early and took up running and eating healthily, and lost the weight he had gained. He has since run his first marathon. Phil is also qualified as a windsurfing, kayaking and sailing instructor.

RTE will be attending the following events with our pop-up clinic:

You can also fill out an application form on behalf of a family member or friend by filling out the relevant section. For further information, call 01 7088195 or email [email protected]