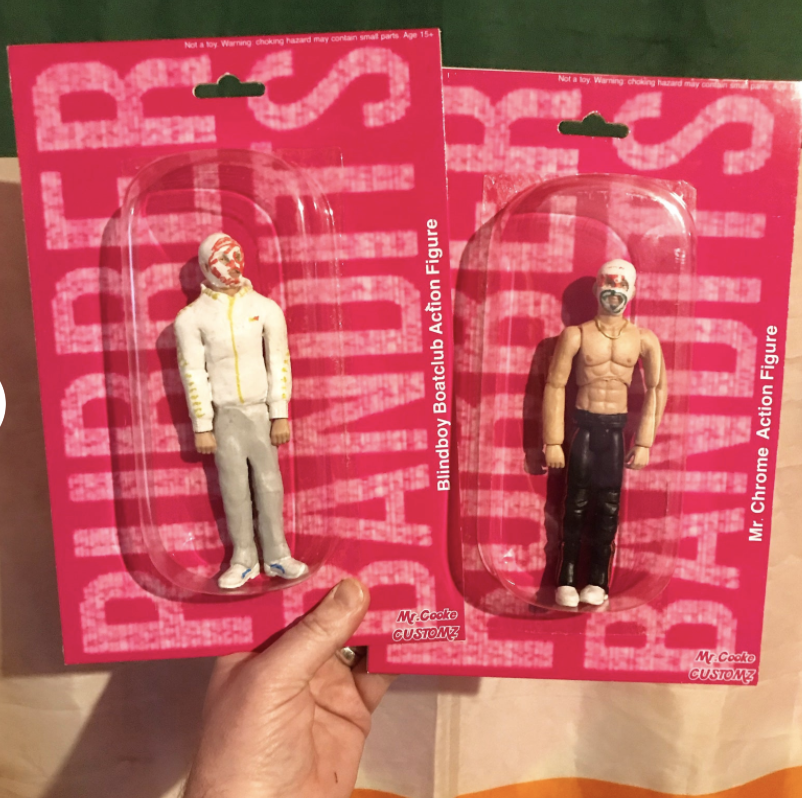 Rubberbandits action figures have recently been purchased from MrCookeCustomz, a figurine creator and seller on Etsy. Pictured above are the two figures of Blindboy Boatclub and Mr Chrome.

MrCookeCustomz, a figurine maker on the popular website Etsy, has released his own action figures of The Rubberbandits.

Esty is a global market that features handmade crafts ranging from local to international sellers. Most Etsy retailers design, customise and make their own work available to the general public. One of its users, MrCookeCustomz, creates unique action figures designed for displays. Some of his other works include Tony Soprano, Stevie from Mid 90s, Juliette Lewis, Axl Rose and a Gulag Rock from Call of Duty.

Now, MrCookeCustomz has released a handmade, custom set including both Blindboy Boatclub and Mr Chrome. This once-off designed duo has already been sold, but people across Limerick are still celebrating their famous comedy, hip-hop rappers making it to action figure form.

The set was originally sold for €58.45 altogether and is currently sold out on the Etsy website. On MrCookeCustomz Etsy page, he says, “These are custom figures and in no way professional. Not toys meant for display purposes only. Each will come in flexi case for shelf display.”

The seller even includes a small message at the bottom of his message to listen to The Blindboy Podcast, which is hosted by Blindboy himself as he discusses current topics, issues and mental health. In more recent times, Blindboy has been encouraging people to wear masks to protect against the spread of Covid-19.

Twitter has been a major outlet for the star who continues his podcasting work while also urging this safe behaviour amongst Rubberbandits fans and people across the world.

Lots of people asking about face coverings. If you buy from https://t.co/cR8fctUpgt they will give a mask to a person living in direct provision too

When discussing the action figures, MrCookeCustomz said, “I’ve had them sat on my shelf for a while and shall miss them.” He also talked about his artistic process when making his figurines, saying, “I mostly make one-off custom figures of tv/movies/musicians that I enjoy. Figures that I’d like to own that don’t exist anywhere else. If they sell, that’s great. I’m happy for someone else to own a piece of my dodgy art. If not, that’s great too. I get to keep them in my own collection. I’m a big fan of The Rubberbandits and find their sketches and music videos hilarious. They already look like masked crusaders why not have their own action figures?”

While these figurines are currently unavailable, we hope whoever purchased them holds them dear as The Rubberbandits continue on their epic legacy.