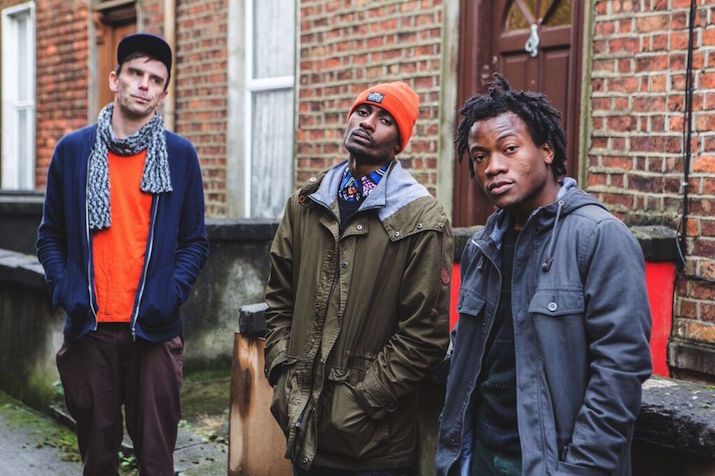 Up and coming Limerick musical trio Rusangano Family have just released their debut album Let the Dead Bury the Dead which is set to be one of the most  popular Irish albums of the year. The musical trio formed in early 2015 and is made up of MC God Knows, poet and wordsmith MuRli and DJ mynameisjOhn. Rusangano Family produce unique bass-led music thanks to their diverse backgrounds and life experiences. Despite their diverse backgrounds the trio are a family unit and explore issues such as identity and belonging through their music. The mixture of hip-hop, electronic and their honest yet edgy lyrics give the band a unique vibe. Their music can be described as socially engaging, as the trio incorporate global cultures and traditions into their work.

Last Friday April 22 at Dolans Warehouse Limerick, Rusangano Family marked the release of their new album Let the Dead Bury the Dead with an electrifying performance. The trio had recent success at music festival SXSW in Austin Texas, where they were received extremely well by the crowds. SXSW is a hugely popular music festival, which just shows how popular the Limerick trio are becoming. The albums is hugely based on the places and sounds that have influenced them throughout their lives. From where they have grown up to where they live and work. And of course Limerick city is a major element of the album. The album has received huge praise and has potential to win a Choice Prize.

God Knows is on his way to becoming one of the most inspiring MC’s in Ireland, with his electrifying live performances. MuRli is a 24 year old poet and wordsmith, MuRli has incredible on stage presence thanks to his storytelling abilities as an MC. MynameisjOhn a DJ with a fresh up and coming sound, he has worked with the likes of Kutmah, Gaslamp Killer, Hudson Mohawke and Prefuse 73 to name a few. Together they are an unstoppable force set to take the music world by storm.

Rusangano are fantastic advocates for Limerick, with God Knows getting behind Limerick’s 2020 bid. The musical trio could even help Limerick win their first Mercury Prize. Check out the bands debut album Let the Dead Bury the Dead, keep an eye out for the trio which I’m sure we will be seeing a lot more of!