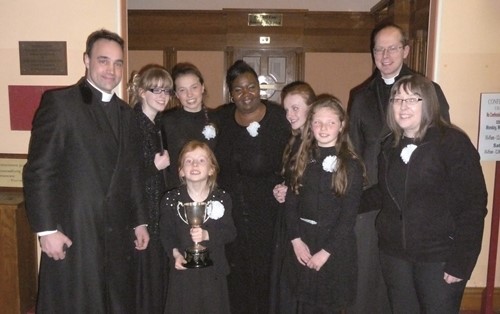 The 2016 Limerick Choral Festival had a new entrant in the Plain Chant genre – The Sacred Heart Church Choir, Limerick. The twelve-member choir was comprised of Canon Lebocq (Prior of Sacred Heart Church and Choir Director) Canon Coggeshall (Vicar) and Abbé Turner the Seminarian all of the Institute of Christ the King Sovereign Priest, who now occupy the former Jesuit Church of the Sacred Heart. Other members included women and children, the youngest of who is just 8 years old!

They competed and won against the Glenstal Abbey Boys Choir, and were found worthy to take home the much coveted trophy that had never been given out to any group since 2009. The presence of the Institute in Limerick affords the people of Limerick opportunity to experience the Solemn Traditional Catholic Latin Mass, which is greatly enriched by Gregorian Chant music. This form of worship is staging a comeback, and is popular especially with young people, as can be seen by the many priestly and religious vocations in recent years.

The Limerick Choral festival is now in its eleventh year and is bigger than ever. This tradition of a major choral event in Limerick stretches back as far as 1950’s when some interested choir enthusiasts held a festival of plain chant in the city’s Cathedral of St. John the Baptist, which ran successfully for approximately ten years. This was essentially aimed at school choirs to foster a love of choral music among for those taking part in the festival. The prime objective of this initial event was rewarded with the graduation of these same young people into some of the finest church choirs throughout Limerick city.

The festival will take place over 3 days and will be held in 5 different churches around the city. This festival will showcase the rich tradition of choral music in Limerick and will feature performances by 50 regional choirs who are booked to perform during the 3 day festival.