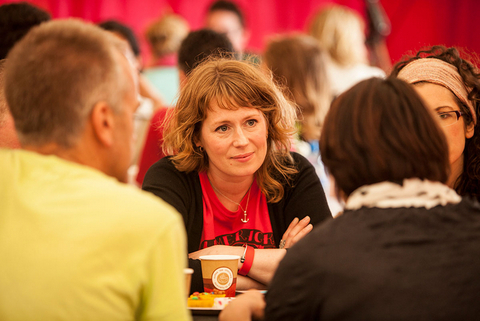 Salon Du Chat – Think speed debating, think talk without the chit, think the conversation of life… Salon du Chat is an arts project with a twist. The audience are welcomed not into a theatre but into a cafe. They take a seat and are given a hot drink and a menu. But instead of ordering food they order conversation. Then for the next 45 minutes or so they chat and talk to their friends or strangers about the topics they have chosen from the menu Originally conceived by Limerick residents Roisin Buckley, Gillian Jonker, Jennifer Moroney Ward and Conor Buckley, as part of a Daghdha Dance Company project, This amazing idea has gone on to be programmed annually by Electric Picnic. Now thanks to Limerick City of Culture 2014 funding Salon du Chat returns to Limerick with four events over the course of the year.

The first Salon du Chat takes place on Thursday 10th April as part of Limerick Spring, a Festival of Politics and Ideas. The event will run from 8pm – 10pm at Fitto Cafe, Catherine Street. A different menu is created for each event, using conversation topics relevant to the audience at that time. The event organiser Roisin Buckley says: “We all spend a lot of time talking every day, but we don’t often have time to talk about things that really matter. At Salon du Chat we find couples talking about things they’ve never discussed before, and strangers having inspirational conversatio

ns. The aim of this event is to stimulate wonderful conversation in a relaxed and sociable environment.”

For the first Salon du Chat of 2014 expect a menu that spans culture, music, sport, politics, the environment, social media, and more. A couple of topics that have been confirmed are ‘What’s on The Box (Set)?’, ‘Minister for InJustice’, and ‘Overbearing Status Sharing’. Salon du Chat is a free event supported by Limerick City of Culture 2014. For further