By Richard Lynch on October 26, 2018@richanthon 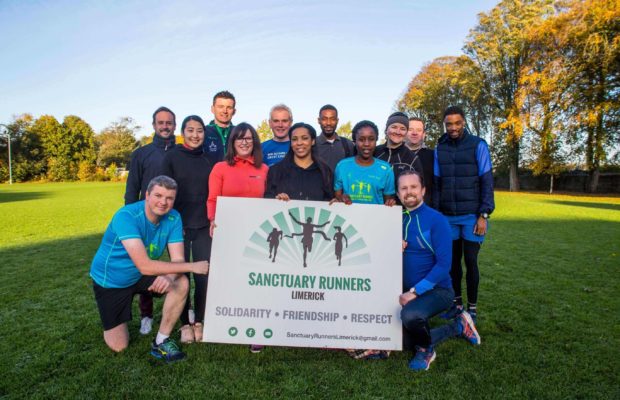 The Sanctuary Runners’ initiative, established in Cork in February 2018, is all set to take over local parks in Limerick.

The initiative aims at enabling Irish people to run in solidarity with those living in Direct Provision centres in Limerick City and County.

This would not only benefit the physical health and mental well-being of those in Direct Provision but also help raise awareness about the Direct Provision system and help forge a friendship through positive action.

The Sanctuary Runners will join forces with local park runners in the city and county so that members of the team can run together each Saturday morning.

The organisers hope to bring Irish people and those in Direct Provision together on the one running team so that The Limerick Sanctuary Runners are able to enter a team in next year’s Great Limerick Run.

Graham Clifford founder of the Sanctuary Runners works as a feature writer with the Irish Times and broadcaster with RTÉ Radio 1. He was delighted to bring the initiative to Ireland’s sporting capital:

“Limerick is a natural home for the Sanctuary Runners. And I am so confident that the amazing reaction and support we received in Cork will be replicated here. Our initiative is about respect, solidarity and humanity. Sport is a great equalizer and when people are running together, shoulder-to-shoulder it’s then that conversation flows, smiles emerge and friendships build.”

The Sanctuary Runners, a non-profit organisation run entirely by volunteers, had a team of 200 competing at this year’s Cork City Marathon including 51 runners from across five different Direct Provision Centres in Cork.

Gillian Fenton, Marketing Manager at the Lime Tree Theatre will lead the initiative in Limerick and hopes members of the wider public will join the group.

“Often people don’t know how they can help people in Direct Provision. They don’t know if and how they can meet with them and show their solidarity. This is a simple, uplifting and positive way of making that connection and showing them how compassionate the people of Limerick are,” she said.

Donnah Vuma, founder of “Every Child is your Child” and a resident of Direct Provision explained the importance of this initiative

“We all know how important exercise is for keeping us physically healthy, it also reduces the risk of developing mental health conditions, like depression and anxiety which many people experience while living in direct provision. To be able to exercise with friends and members of the local community bridges the gap between communities which makes Sanctuary Runners so great. The initiative will increase self-esteem, social skills and networks while reducing isolation and loneliness.”

Amongst those who’ve lent their support to the Limerick Sanctuary Runners are Cllr Joe Leddin and all the team behind The Great Limerick Run and Phelim Macken from Limerick Sports Partnership.

Sporting icons such as Sonia O’Sullivan, Derval O’Rourke, Rob Heffernan and GAA’ s Tomás O’ Sé have all given their time to the initiative in recent months.

Blue running tops, sponsored by companies and local authorities, will be given to every Sanctuary Runner for free. This initiative is non-political and not focused on promoting protest. It is based on positivity, dignity, respect and solidarity.

For more information on The Sanctuary Runners go here